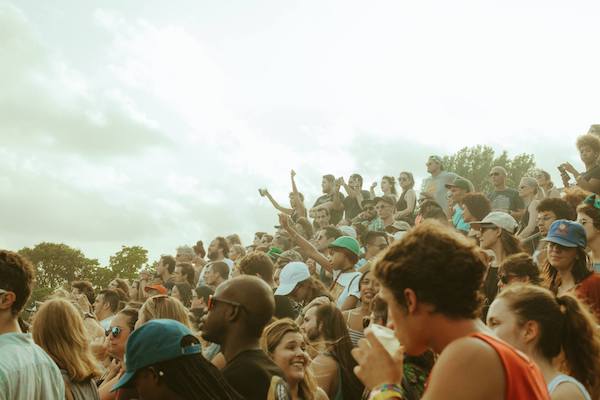 To make it simple, this year's Pitchfork Music Festival in Chicago was an absolute blast filled with surprises, sincerity, and really sore feet. Like seriously I'm shocked my feet are still working and didn't just break into a million pieces. Anyways, this fest had a ton of acts I wanted to see and many of them didn't disappoint. So, much like the average person who attends Pitchfork Music Festival, I'm going to arbitrarily rank my seven favorite sets of the weekend!

My rock album of the year so far is definitely Priests' debut record Nothing Feels Natural. With that in mind, I had some fairly high expectations about this set and they were mostly met, as vocalist Katie Alice Greer brought her absolute best with vocals that sound just as good as they did on the record and a crazy amount stage presence. In general, the band's synergy was just insane, with drummer Daniele Daniele giving it her absolute all, bassist Taylor Mulitz and guitarist G.L. Jaguar (who, in my opinion, is the best guitarist in rock music today) working in tandem to near perfection giving Greer's guttural yelps the maximum backing they need. However, this ranks so low only because the crowd seemed to not be giving the response the band deserved, as I was expecting mosh pits but instead got a lot of people just swaying. Still, the band was great and if you can catch them, please do.

In regard to electronic music, I can be fairly out of the loop and only really hit on the big artists my friends are heavily recommending to me. Of course, one of those artists is Nicolas Jaar, who released my electronic album of the year last year with the fantastic Sirens. This set only ranks so low as I ended up missing solid half of it as it was on the third day of the fest and my feet were pretty much done. However, once "Three Sides Of Nazareth" came on I knew I had to get closer up and watch the rest. The visuals behind him and on the festival's projections were trippy as hell, and watching Jaar moving around his little setup trying to make his beast of a performance work together was just awe inspiring to watch. Also, he brought a saxophone or a bass clarinet out at one point for a rendition of "The Governor" and it was awesome and badass. However, not the best saxophone moment of Pitchfork Music Festival as we'll get to that a bit later on, but still, a great set I wish I had made the entirety of.

When Weyes Blood, aka California musician Natalie Mering, released her third album Front Row Seat To Earth last fall, I was absolutely blown away from first listen. Mixing together the retro pop stylings of contemporaries like Ariel Pink with the 1970s style songwriting of Joni Mitchell and Carpenters, Mering made one of the absolutely best albums of last year and turned in a killer performance at the festival. She sounds just as beautiful here as she does on record as the astonishing "Seven Words" and epic "Do You Need My Love" only gain more power live. She also closed out the set with an absolutely killer cover of CAN's "Vitamin C" which show off a powerful versatility that can hopefully keep shining throughout her career.

Now, you might already be asking me, why are you ranking LCD Soundsystem so low? Did they not give an absolutely amazing performance? They did actually, in fact it was pretty great. However unlike the bands ranked above LCD here, they don't quite hold such a strong personal connection with me, at least not compared to the bands ranked above. I do love LCD Soundsystem though and it's still so strange that they're actually back and they've essentially been reunited for almost a year and a half now. Like most people after their legendary performance at the Madison Square Garden, I wasn't expecting them to perform, let alone release new music ever again. However, they are back and they absolutely killed as expected. Highlight of the set was definitely the surprise pit that opened up during "Movement" right in front of me that I had no idea how to react to other than "my feet still hurt a lot" and "I have to pee but this owns."

I was a late adopter to Pinegrove. I didn't properly get into them until late 2016 and their debut from that year, Cardinal, was a bit of grower on me. Once I fully wrapped my head around it, I was totally in love with it and the band and had to consume anything they had ever put out, so suffice to say I was extremely hyped for this set and it didn't disappoint. While the absence of backup vocalist/keyboardist Nandi Rose Plunkett (who was touring with Mitski under her solo project Half Waif) was very noticeable, it didn't deter from the pure emotion I felt during the set. Being in that crowd was just an extremely wholesome experience with everyone singing along with frontman Evan Stephens Hall's lyrics and yelps, just knowing that there's all these people here who feel the same way I do and find solace in this amazing band. Oh and I brought a stuffed cardinal and threw it at Hall at the end of the band's set and he caressed it on his shoulder which is the greatest moment of my life.

Unlike Pinegrove, Danny Brown's music is not very wholesome. It's about as emotionally cathartic, but whereas Evan Stephens Hall sings about heartbreak and maintaining friendships, Brown raps about his hard partying to cope with his rough upbringing and horrible drug addiction. However a lot of the time he's able to turn this pain into just straight up bangers which completely rocked the crowd at Pitchfork. Songs like "Monopoly" and "Pneumonia" got the crowd into an absolute frenzy with one of the wildest mosh pits I have ever been in. This energy only boosted Brown who gave it his absolute all not missing a single bar. Of course, that would have been the craziest pit I had been in this weekend had it not been for my #1....

Jeff Rosenstock is the best artist in punk music today. His ethos of giving away most of his musical output for free, booking all ages shows that cost $10-15 or less, and treating his fans like actual human beings with love and care is simply inspiring and artist of all genres should take note of Rosenstock. So when I found out he was playing Pitchfork this year, I was pretty shocked since that was probably the biggest booking he'd ever gotten. Something Rosenstock and his band acknowledged multiple times during the set, as in between songs Rosenstock made the crowd do the wave, crapped on the festival's sponsors, and also stated how much he was paid to play the fest (which for those wondering, it was $7500) before launching into last year's "Festival Song" off his album WORRY. While the Danny Brown pit was filthy, Rosenstock's pit was also filthy, but incredibly wholesome in singing along to Rosenstock's lyrics about the woes of depression, capitalism, and love while running 30 miles per hour at each other. To quote Stereogum's Chris DeVille: "Jeff Rosenstock's Pitchfork set today is the kind of show everyone here is gonna be bragging about seeing for the rest of our lives."