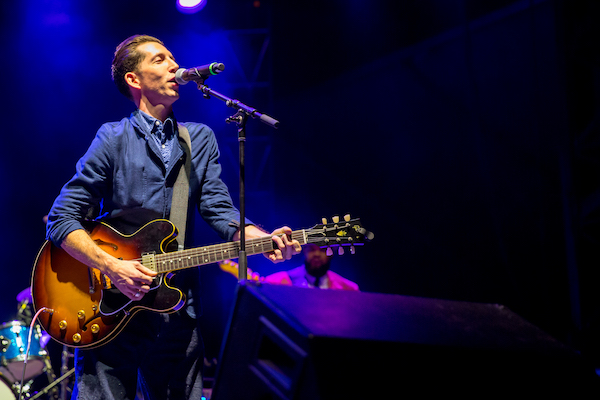 LouFest Day 1: A Carnival of Nostalgia

This year LouFest moved to The Muny parking lot from its original home -- the central fields of Forest Park -- due to construction. The new space gave the festival a decidedly different feel and flavor. Organizers played up a carnival feeling on the site with a Ferris wheel, hot air balloon, and quadruple-decker lounge (dubbed "Cabanaland"). Market Square, LouFest's offering of local makers selling wares, was set up in the style of a midway with a ceiling a parasols, while the new Fizz & Folly section of the festival was a salute to the birth of the cocktail party (begun in St. Louis in 1917).

While headliners Cage the Elephant and Snoop Dogg may have been a draw for the large crowds, it was the duck walk down memory lane that stole the show with the Hail! Hail! Chuck Berry tribute concert. The band was comprised of acclaimed local musicians including Big Mike Aguirre, David Grelle, Kevin Bowers, Andy Coco, and the Funky Butt Brass Band horn section with a who's who of talent dropping in to pay their respects. First up was St. Louis's own Pokey LaFarge who handed in twang-tinged renditions of "Maybellene" and "Teenage Wedding."

Special guest Valarie June took the stage with a retro-soul versions "I Want to Be Your Driver" and "Memphis," literally letting her hair down and dancing to beat the band. David Grelle of The Feed on keyboard and Cory Henry on organ were standouts with dueling solos that lent a funky feel to the festivities. The Funky Butt Brass Band horn section of Ben Reese, Aaron Chandler, and Adam Hucke brought the heat with blazing interpretations of the Chuck Berry classics. Also joining in the party were Britt and Alex of Spoon, Huey Lewis (with a scorching harmonica), members of Cage the Elephant, and Charles Berry, Jr. with Charles Berry III.

The performance at Hail! Hail! Chuck Berry that brought down the house was that of Captain Kirk Douglas (The Roots). His renditions of "Reelin' and Rockin'" and "Roll Over Beethoven" were the apex of the tribute concert and got the crowd in a frenzy.

Earlier in the day, Huey Lewis & the News had a similar effect, whipping up a dance party on the parking lot that served as the Enterprise Stage field. The band members were decked out in suits with Huey Lewis giving a SoCal vibe in his jeans and button-down shirt. They came out strong with the "Heart of Rock 'n' Roll," giving a special St. Louis shoutout among the other cities of the lyrics and drawing a roar from the crowd. They didn't let up from there and kept the tempo up with a slew of other hits, including "If This Is It," "New Drug," "Step by Step," and "Power of Love." Lewis thanked the audience for coming out to hear songs about past escapades and shouted, "Let's make this a night to remember!"

LouFest also featured some fresh faces and new tunes with Middle Kids out of Sydney, Australia. They're a female-fronted four-piece rock outfit with their first full-length album on the way, and Middle Kids took the opportunity to showcase that new music to an enthusiast young audience.

Taking the stage right before sunset, Spoon presented a mix of singles from their latest album "Hot Thoughts" and popular favorites from the past. The crowd seemed particularly primed to hear "I Turn My Camera On" from the band's classic Gimme Fiction album. Lead singer Britt Daniel obliged, slinking around the stage in a black denim outfit with a large silver longhorn belt buckle.

Earlier in the day, those able to bounce between Hippo Campus and Jonny P enjoyed a delightful mix of indie pop and neo-soul, respectively. Hip hop artists Mvstermind and Mathias & the Pirates entertained the early crowds. Mathias & the Pirates were a particular standout, performing rousing renditions of past singles "Brettanomyces" and "The Panic Button." The former featured special guest star 18 and Counting (Stan Chisholm) who thanked the crowd for getting up early to catch the set. Included in that set were also some new music from a forthcoming album due out this December.

Whether there for the old or the new, LouFest Day 1 delivered a satisfying mix.

To see Dustin Winter's photos from the first day, click on the image below. 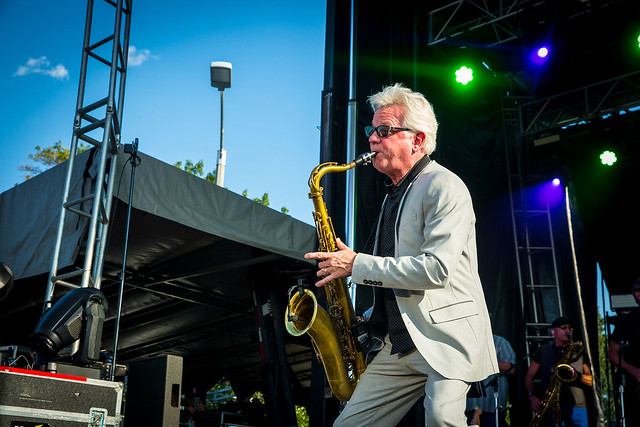