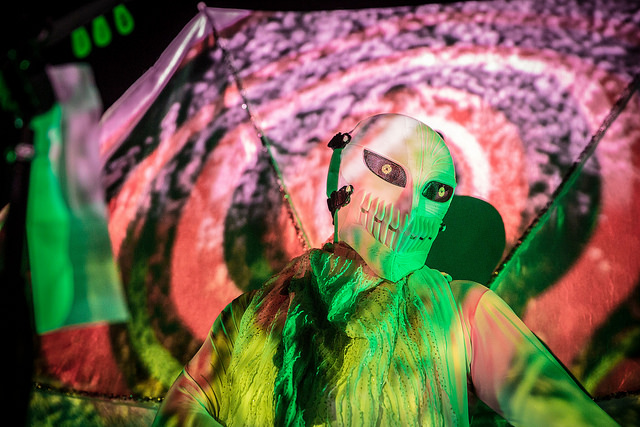 Three Costume Changes, Eighteen Songs, and a Lot of Confetti: Of Montreal at the Ready Room

I find that being a so-called 'music person' does have one major drawback: parties are invariably ruined by the subpar music choices. ("Did someone seriously put on Iggy Azelea? What are we -- fifteen?") It's not like I want people to play Pet Sounds at the club, but it certainly would be nice to cut loose to something a little less conventional every now and then. Considering this, let me make my position clear: I love Of Montreal shows. Part concert, part psychedelic dance party, part drag show, it's like the best fever dream you've ever had.

Spawned from the famous Elephant 6 collective, Of Montreal has always had a place among the pioneers of the eccentric, and throughout their sprawling discography, they've never failed in crafting infectious, off-kilter earworms. 2007's Hissing Fauna, Are You the Destroyer, which was reissued in May, cemented their place as indie-pop icons by merging strange and often poignant poeticism with effortlessly danceable melodies. In fact, many of frontman Kevin Barnes's songs have an autobiographical bend hidden under their glittering facade, shedding a whimsical light on issues of mental health, gender politics, and the struggles of marriage.

The night opened with Showtime Goma and Nancy Feast, aka Jen Goma of A Sunny Day in Glasgow and Kristina Lieberson of TEEN. The duo, clad in matching red and white jackets, structured their set as a scripted talk show; at one point, Goma leaned over the edge of the stage with the microphone and asked a speechless photographer in a matter-of-fact voice, "And what are your kinks?" Their music was similarly theatrical -- in fact, they choreographed every song down to the last flourish and facial expression. Based around lush synths and stripped-down vocals, their sound falls in line with the likes of Grimes or Tei Shi. One listen to "Propel," taken from Showtime Goma's Smiley Face, and the duo's talent is immediately obvious: they are capable of the vocal gymnastics and glimmering production that is bound to hit the indie mainstream.

The last time I saw Of Montreal, I was nearly overwhelmed by the satanic cloaks, two-man armadillo costume, and dancers dressed as giant vaginas (not to mention Barnes clad in nothing but lacy underwear, knee-high striped socks, and towering heels.) This time, however, I was mentally equipped to handle anything and everything that they might decide to throw at us. And boy, did I need the preparation. There were masked dancers dressed as cops and Darth Vader and Mayan-esque animal statues. There were songs about partying ("Wraith Pinned to the Mist (and Other Games)," "The Party's Crashing Us") and") and songs about Norway ("Oslo in the Summertime," "A Sentence of Sorts in Kongsvinger") and songs about mental illness ("Heimdalsgate Like a Promethean Curse"); regardless of content, all of these songs were glitteringly, irresistibly danceable. There was jumping (oh, so much jumping) on behalf of the entire audience, and I apologize to the man behind me whose toes I frequently stepped on. There was a ton of confetti and a ton of balloons and a ton of feathers (which, in hindsight, was an awful idea, considering how easy they were to inhale). There were three costume changes for Kevin Barnes: first, a blonde, curly wig, hot pink fishnets and a glittering blue miniskirt; then, a sheer, red dress over lacy underpants; finally, a blue floral jacket and towering Marie Antoinette-esque 'do.

Of course, Of Montreal is more than just a huge party. If you take a closer look at virtually any of their songs, you'll see some rather astute and even depressing songwriting: consider "A Sentence Of Sorts in Kongsvinger," which has the lines "I spent my winter with my nose buried in a book / While trying to restructure my character/ 'cause it had become vile to its creator" over swathes of colorful synth. However, it feels a little wrong to take their lyrics so seriously. Not to sound cheesy, but Of Montreal's appeal is in celebrating the stuff you'd never celebrate otherwise -- the weird and the sad and the maddeningly mundane (like in the groovy "Gronlandic Edit," during which Barnes sings "I am satisfied / Hiding in my friend's apartment / Only leaving once a day / To buy some groceries"). At least, for the hour that Of Montreal is on stage, life seem a little more exciting.

Click the image below to see all of Dustin Winter's photos of the evening's performances. 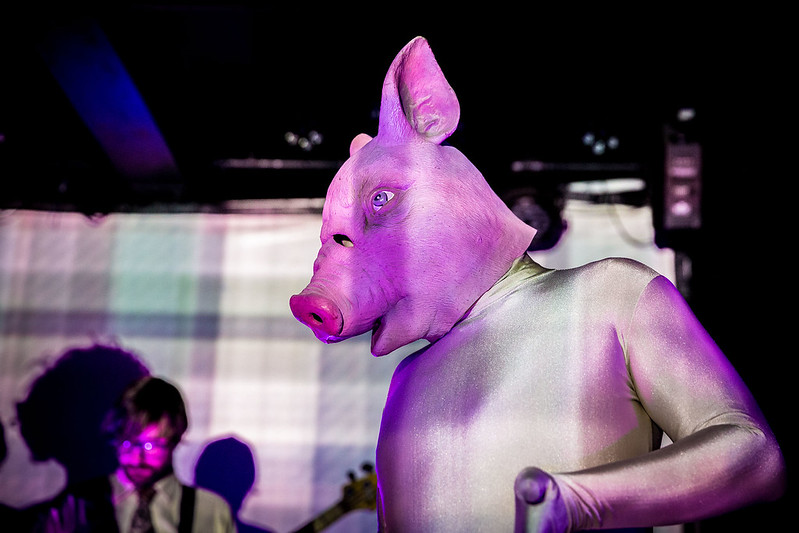