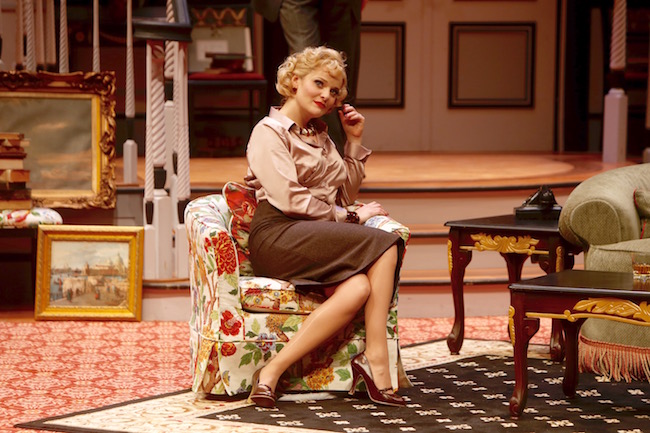 The Repertory Theatre of St. Louis closes its season with the madcap comedy “Born Yesterday.” Written in 1946, the clever script by Garson Kanin presents a slyly masked morality tale centered on political influence that delivers a critical, but no less accurate, lesson in civics.  In 2018, the Rep’s production not so subtly suggests that in many ways, the more things change, the more things stay the same.

Newly rich and emboldened by both his money and his ability to strong-arm others to get what he wants, Harry Brock blows into Washington, D. C. intending to buy a little political influence. He’s wealthy and unscrupulous; the perfect combination to ensure upcoming legislation favors his ability to continue reaping in the cash. Brock is here to meet lawyer Ed Devery, who has promised to smooth his way and open doors to the offices of senators and congressmen interested in lining their pockets in exchange for their vote. Billie Dawn, a former showgirl and silent partner with a majority stake in Brock’s business is also in tow, as is Brock’s henchman cousin Eddie.

After an awkward meeting with Senator Norval Hedges and his wife, Brock hires journalist Paul Verrall to refine and provide a little polish to Dawn, helping her better fit in with the local schemers and social climbers. She proves a capable student, filled with genuine curiosity and enough metal to stand up to Brock’s bullying and manipulation. As Verrall opens Dawn's mind to new ideas and the truth about Brock’s business with the lawmakers she finds him less and less appealing. Naturally, the showgirl and the reporter inevitably fall in love. The story is not unfamiliar, but it sparkles with wit and excellent physical comedy as Dawn quickly and easily blossoms into a formidable force, stealing our hearts along the way.

“Born Yesterday” is driven at breakneck speed by director Pamela Hunt, with an impressive performance from Ruth Pferdehirt as Billie Dawn. Pferdehirt is terrifically attractive in a stereotypically wide-eyed, not as dumb as everyone thinks blond way that suits the story. Her expertise at the over-the-top reactions, double takes, and physical comedy is really top-notch and guaranteed to keep most of the audience laughing as this tale of good triumphing over evil unfolds. Pferdehirt's voice is light and breathy, with a high-pitched affectation that’s exaggerated when she’s playing dumb and more controlled when she dons glasses and becomes studious. The difference isn’t overly pronounced; it is, however, just enough to hint at the likely unraveling of Brock’s plan.

Aaron Bartz is smart and appropriately over-eager as the smitten reporter with a nose for scandal, an appreciation for good books, and a love of democracy. He’s got an all-American charm and Buddy Holly glasses that, when aided by a few over-earnest declarations, immediately identify him as the good guy. Andy Prosky shows a quick temper as the dishonest Brock, but he loves Dawn to the point of ignoring his lawyer’s suggestions, setting himself up for his inevitable fall. As lawyer Devery, Ted Deasy demonstrates a strong sense of right and wrong, clearly indicating how completely he knows he’s on the wrong side. A few of Devery’s lines are so critical of his actions one wonders if he didn’t, perhaps subconsciously, invite Verrall to meet Brock with the understanding that the nosy journalist would bring him and his client Brock down.

Randy Donaldson is effective as Brock’s cousin and the muscle behind the operation, while Kurt Zischke and Gina Daniels are engaging and appropriately awkward as the targeted senator and his wife. The supporting ensemble features several familiar St. Louis actors and Webster Conservatory students, including Michelle Hand as the delightfully conspiratorial maid and Michael Cassidy Flynn as an uppity barber, as well as CeCe Hill, Cassandra Lopez, Maison Kelly and Ryan Lawson-Maeske.

The Rep has, as usual, created a perfectly appointed environment for the story. James Morgan’s set feels like a posh, post-World War II hotel, with lots of competing patterns in the furniture and wall coverings that somehow harmonize, while Lou Bird’s costumes clearly designate the period and social standing. Mary Jo Dondlinger and Rusty Wandall complement the proceedings with lighting and sound that never intrudes but helps direct focus.

“Born Yesterday,” continuing through April 8 at The Rep, is not a subtle play, but -- to the company and actors’ credit -- it comes across as a light comedy even as the playwright doggedly pursues themes of trust, morality, and political criticism. Heavy-handedness notwithstanding, the show is a highly entertaining production, with a satisfying if transparent storyline, solid direction and pitch-perfect casting. Pferdehirt’s spectacular performance alone keeps this show entertaining despite a script that is at times too predictable and moralistic.