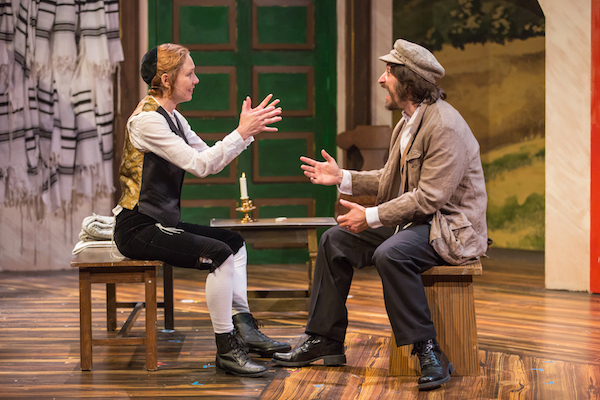 Sensitive and insightful, 'Yentl' gives a moving story a kick of rebellion

The New Jewish Theater closes their nineteenth season with a rousing, spirited production of Yentl, a play with music, that's a deeply satisfying, joyful expression of faith, humanity, and theater. The acting direction, music, and stage craft come together in perfect harmony to tell the tale of a young Jewish girl with an insatiable thirst for knowledge. Along the way, we get a glimpse of of changing times and thought, an infusion of rock 'n' roll rebellion and a genuinely touching love triangle.

Set in Poland during the late nineteenth century, Yentl, the only child of Reb Todrus and his late wife, is decidedly not a typical girl. She has a longing for knowledge and is driven to study the books and laws of Judaism, a trait her father has successfully nurtured but not controlled.

There's an irony to her studies, however, as the rules she's learning strictly forbid her gender from this education. Both Yentl and her father are torn by this. But their's is a faithful house and her father stresses that Yentl must give up her studies when she finds a husband. Her aging father is desperate for Yentl to marry, but when she refuses every suitor he and the local matchmaker present, she soon finds herself orphaned with a small dowry and no prospects.

In a moment of clarity, foreshadowed by the moving opening scene, Yentl dons one of her father's old suits, assumes a masculine identity and the name Anchil, and sets out to find a school. She soon meets Avigdor, a handsome student from a poor family, who invites Anchil to join him in his studies in Bechev. The small town is quite supportive of its local school and welcomes the students into their homes where Anchil soon meets Hadass, Avigdor's true love and one-time fiancé.

Shanara Gabrielle turns in a spectacular performance as Yentl, easily handling the transitions from young woman to curious scholar. Her voice is strong and her character clearly defined and defiant. Gabrielle fully inhabits the character's dichotomy and the resulting intellectual exuberance and sexual confusion, showing passion and considerable emotional range as she navigates through the consequences of Yentl's choices.

Gabrielle is matched in intensity and enthusiasm by a charismatic Andrew Michael Neiman as the vibrant, scholarly Avigdor and by a radiant Taylor Steward as the lovely and kind Hadass. The chemistry between the three is electric, infusing the production with a sense of light and hope even as Yentl's path becomes clouded and uncertain. The three actors show absolute trust in the relationship, which drives the show forward with authenticity and considerable tension.

The ensemble is strong as well, with each of the supporting actors playing multiple roles featuring Terry Meddows, Jennifer Theby-Quinn, Peggy Billo, Amy Loui, Will Bonfiglio, Brendan Ochs, Luke Steingruby, and Jack Zanger. The actors add considerable depth and texture to the story and songs. Meddows is sympathetic as Yentl's father, Theby-Quinn charms as Avigdor's alternate to Hadass. Loui, Billo, Bonfiglio, Ochs, and Zanger successfully fill in missing exposition and add color and depth to the musical chorus, while Steingruby impresses, contrasting Gabrielle's earthy voice with a number of small, piercingly pure solos.

Gabrielle handles the singing well, infusing the rock numbers with energy and fire that's mirrored by the ensemble cast. The choregraphy is a pleasing mix of modern steps and traditional folk dances that, as with the music, works thematically though it breaks all conventions of period. The small band fills the space nicely under the direction of Charles Mueller. He and Coffield keep the story focused, the characters realistically varied and the show a satisfying experience.

Our assumptions about gender identification, while not central to the story's message, are nudged by Yentl's choices, and her comfort living her life as a man and scholar may touch some nerves. The script and performance doesn't examine these questions deeply, however, but they are not completely ignored. While Yentl's choices are accepted at face value for the sake of the story, the responses of the characters -- and the fact that those in the know chose to maintain her secret -- bear reflection.

Yentl, a play with music running through June 5, 2016 at the New Jewish Theatre, is a well-crafted story with a subject that's relevant to current gender politics, but it resonates as compassionately and unambiguously human at heart.