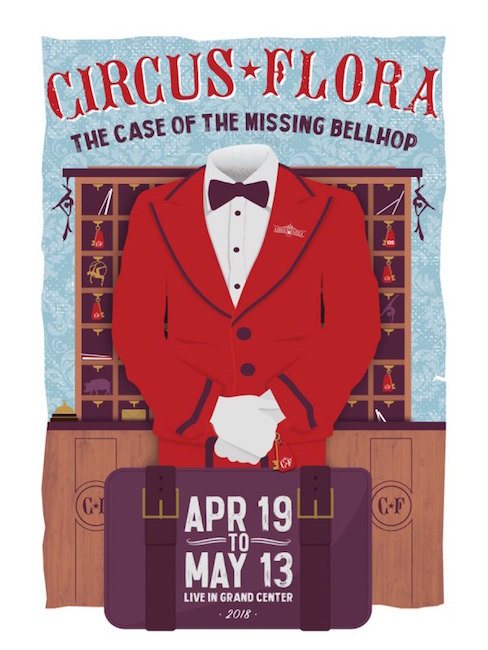 The venerable Circus Flora brings fresh acts, a sparkling new lead character and a charming story with a touch of Wes Anderson whimsy to its new permanent home in Grand Center. The result is a delightfully entertaining and fun to follow along mystery that ups audience interaction as well as eliciting the usual gasps, awes and ahs.

This year’s story is a fanciful tale filled with clues to add up as well as the usual array of circus acts. The world famous sleuth Detective Gordon has checked into the Balding Hotel for a little rest and relaxation. But the disappearance of the hotel’s trusty bellhop soon finds her searching for clues in an attempt to solve the question of his whereabouts and discover who, among the prestigious guests, is behind this plot to ruin the popular hotel.

Many familiar Circus Flora faces are among the suspects, including The Flying Wallendas, the circus’s ever-popular tight rope walking family; the thrilling horsemanship and riding tricks of the Alanian Riders; the captivating swinging trapeze artist Roxanne Gilliand; the walking the walls cool factor of the Swing Up trampowall team; and, of course, the tumbling acrobatics and throws of the St. Louis Arches. These acts never disappoint and it’s a pleasure to watch the increasing abilities and talents of individual team members year-after-year.

Those familiar faces are joined by Jayson Dominguez, whose awe-inspiring, gravity defying “Wheel of Destiny” act must be seen to be believed, and Cousin Grumpy, Nina Meluzzi and the Porkchop Revue, a marvelous quintet of performing pigs who will make you laugh at their feats of agility and vocal prowess. Dominguez is telegenic and expressive, and his ability to balance, spin, jump and turn while spinning is thoroughly engrossing. His entire act is on-the-edge-of-your-seat exciting and you will likely find yourself holding your breath then exhaling in relief more than once, just like the rest of the audience. Like the entire show itself, everything amazing about these performers is presented at an up close view that's as often gasp inducing as it is impressive.

Cecil Mackinnon once again returns as our narrator Yo-Yo and physical comedian, magician, and slight-of-hand expert Adam Kuchler is the Bellhop of the title, while sponsored artist Amy G, a singer, vaudevillian and acrobatic performer, joins the cast as Detective Gordon. The addition of Amy G and her character brings some engaging interplay with Yo-Yo, updating the narrative delivery without losing the familiar voice and presentation style of the harlequin emcee.

Like most Circus Flora shows, the story is the vehicle by which various acts are introduced and this year’s tale is nicely constructed, using mystery clues, songs and purposeful repetitions to better involve the audience. Adding a mix of personalities to drive the story arc, the production delivers frequent groan-inducing puns and referential jokes and jabs that keep the adults in the audience as interested as the kids. The combination is a show that is at once familiar yet surprisingly fresh and energized while remaining family friendly and fun for all ages.

Peter and Margery Spack have designed a cartoon-inspired set that feels animated even before the show begins. The hotel façade provides a fabulous backdrop for the acts and the humorous mystery as well as a fantastic performance space for the trampowall team. The small band, under the direction of Janine Del’Arte, fills the preshow and transitions with lively melodies that reference the scores of silent film capers while punctuating key dramatic moments. The crew, under the direction of tentmaster Gary “Bear” Wilbur, moves surprisingly quick and efficiently considering the large pieces of equipment that must be placed and secured to ensure the safety of the performers and audience. This production moves like a well-played pinball machine, things are constantly in motion and there’s always something to interesting to watch.

The traditional art of circus performance puts an emphasis on the abilities of the human performers and their relationships with the animal performers and is the heart and charm of Circus Flora. But make no mistake, those thrills and impressive feats require intense concentration and years of preparation to look as effortless as they appear. Because the audience is so close to the action the disappointment is visible to everyone when a trick is missed, often leading to a repeated try that’s met with even louder applause and encouragement. When you can hear the performers breathing and see the sweat on their brows you’re simply that much more connected and you feel like your attention, your concentration is important to the success of each act. The intimacy is unmistakable and the energy palpable; the addition of Amy G and her ability to play the crowd reinforces that bond.

“The Case of the Missing Bellhop” continues through May 13 at Circus Flora, in its new home under the Big Top in the Grand Center Arts District. With references to Hollywood mysteries from a bygone era, and more than a touch of whimsical silliness that serves the purpose, the amazing and athletic performers enthrall audiences of all ages with a fast-paced, action-packed show and entertaining story.