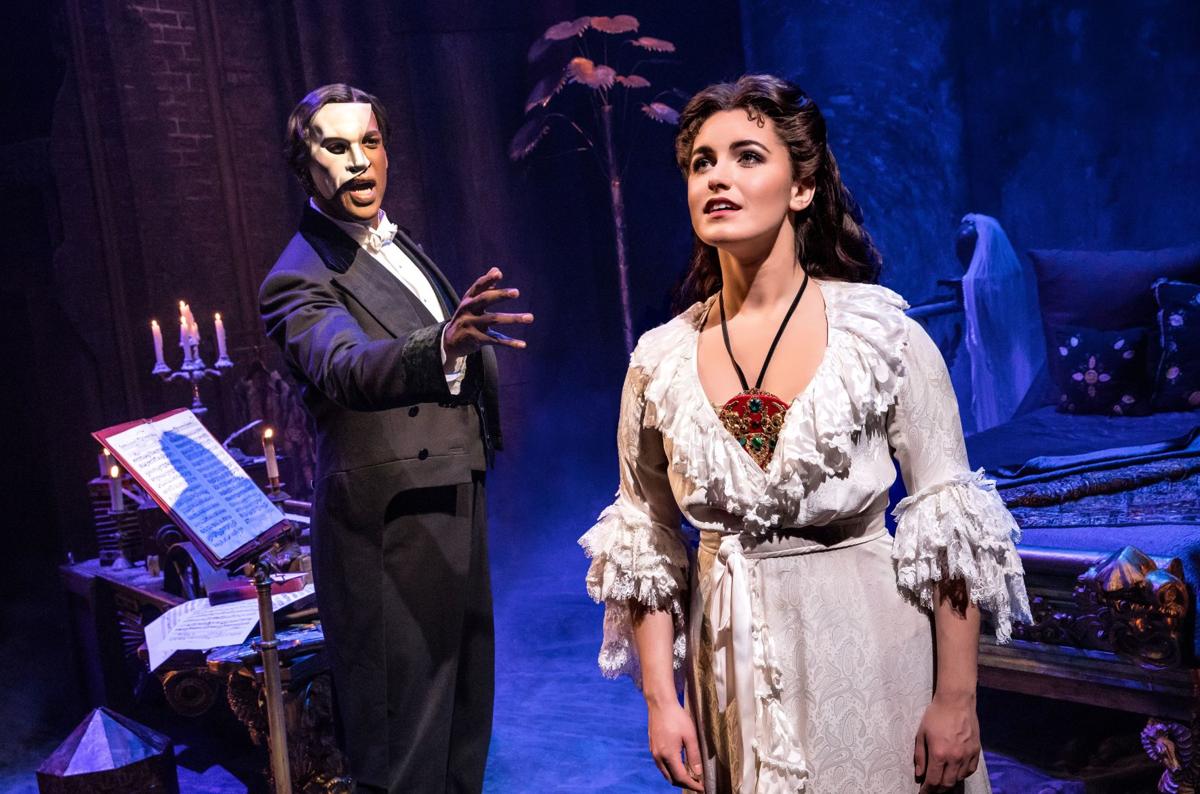 Andrew Lloyd Webber’s crowd-pleasing musical “The Phantom of the Opera” is a haunting story of love and tragedy that plays out on a grand scale. The current touring version, on stage at the Fox Theatre, is visually stunning, fantastically executed, and well performed, leading to an enjoyable, if unremarkable, show. Substantially similar to previous productions, the updates seem to improve the overall pace and add energy and excitement, particularly the pyrotechnics.

Christine Daae, a singer and dancer, rises from the chorus to lead soprano while under the tutelage of a mysterious figure. This Phantom coach also directs the opera’s new management via handwritten notes, frequently delivered by the ballet mistress. When his commands are not followed to the letter, chandeliers fly, sudden illness strikes and fatal accidents befall members of the fictional opera company’s cast and crew.

Mysterious and vengeful, the Phantom demands more and more from Christine, including her love. But she is secretly engaged to Raoul, the Vicomte de Chagny, a friend from childhood and patron of the theater. Still, the Phantom’s demands become increasingly insistent and, during the production of his own work, he kidnaps Christine and hides her in his underground lair, hoping to win her love. When Christine finally shows the Phantom affection, he is overwhelmed and, unable to comprehend the emotions he’s feeling, he sends the young woman away.

Quentin Oliver Lee is tall, imposing and thoroughly captivating as the Phantom. His voice reverberating through the space with authority, then turning tender and affecting in a haunting rendition of “The Music of the Night,” one of the standout production numbers. Physically expressive, with a tendency towards over dramatic, Lee walks the tightrope between intensity and caricature, generally erring towards restraint and letting his commanding presence convey his demeanor.

Lee is partnered with Eva Tavares, as Christine, and her clear, pure soprano is a more than capable counterpoint. Effortlessly hitting the highest range on “The Phantom of the Opera,” she’s equally effective in quieter moments, such as “All I Ask of You” and the touching, lingering “Think of Me”. Tavares pairs well with both Lee and Jordan Craig, who plays Raoul, although there were times during their duet when it was difficult to hear both voices. Trista Moldovan, Kristie Dale Sanders, Phumzile Sojola, Emily Ramirez, Edward Staudenmayer and David Benoit are on point in supporting roles and “Masquerade/Why So Silent” is a rousing ensemble number that captivates the audience.

“The Phantom of the Opera” is a gorgeous show featuring opulent costumes, by Maria Bjornson. The actors occasionally change costume on stage, particularly Christine and Carlotta, in transition pieces that delight. The visually inspiring and surprising set, designed by Paul Brown with projections by Nina Dunn, seamlessly opens, closes and turns to reveal hidden rooms and secret stairways. Fantastic special effects include the falling chandelier and fiery explosions, adding excitement and visual interest to the familiar tale. The chandelier is, naturally, hung over the audience from the center point of the theater. Looking up at the direction of the auctioneer during the opening scene, the reveal of the chandelier against the decorative ceiling of the theater is at once enveloping and tone setting, introducing the well integrated and visually impressive design of this production.

The touring production of “Phantom of the Opera” is a thoroughly delightful show although it is not without its minor issues, including poorly set microphone levels that caused significant distractions during several numbers. Craig suffers the most from this technical glitch; there are times when it is impossible to hear his voice, though his partner, usually Christine, was uniformly clear and crisp. While that issue can be easily addressed, a more persistent issue is the superficial connection between the Phantom and Christine, which weakens the power of the closing scenes. Though each actor is individually outstanding and their songs memorable, the acting and storytelling suffer from the lack of tension. Luckily, the spectacle and music shine throughout, ensuring a thoroughly entertaining production.

Director Laurence Connor, choreographer Scott Ambler, and musical supervisor John Rigby stick closely to tradition in their retelling of the beautifully tragic love triangle. The singing is lightly operatic and the capable cast delivers each note with expert precision. Though the dramatic tension is minimal, the storytelling is visually spectacular and the songs completely engaging, ensuring that the Fabulous Fox Theatre’s presentation of “The Phantom of the Opera, running through May 20, will once again have “The Music of the Night” playing in your memory.