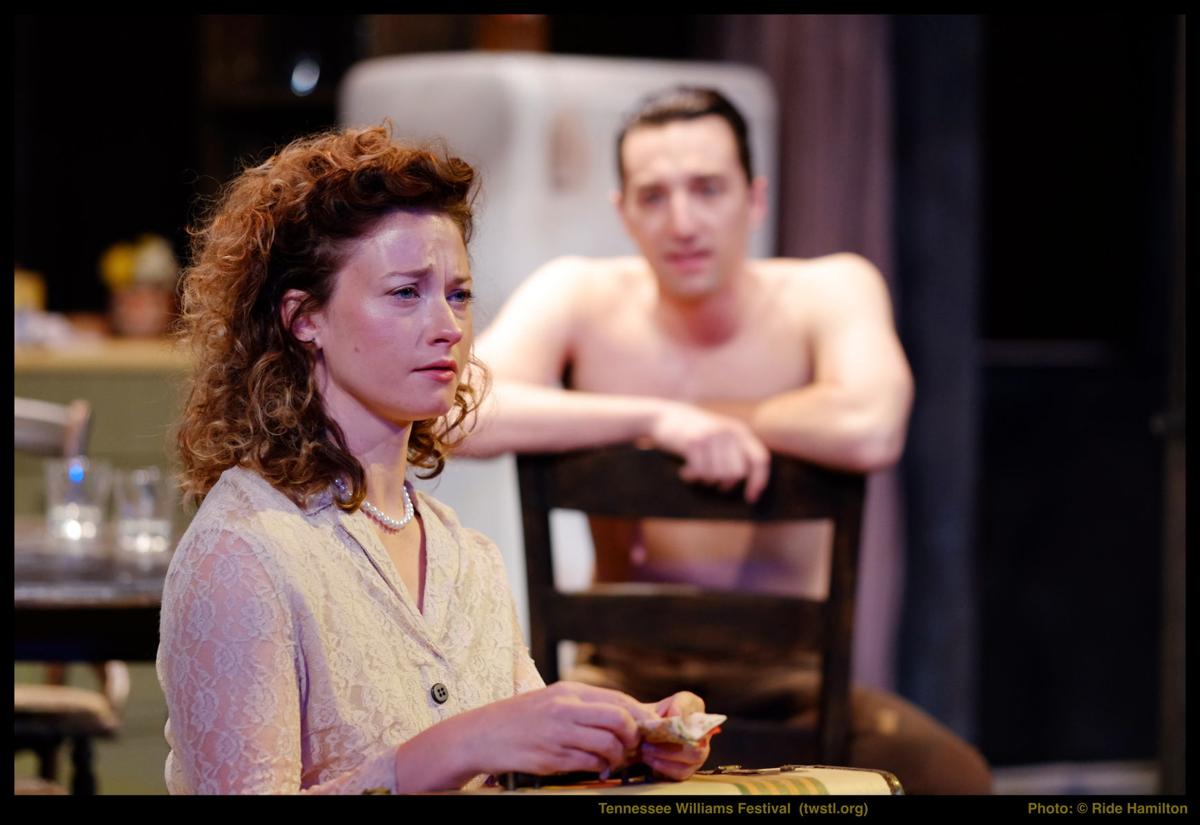 Considered by many to be Tennessee Williams’ masterpiece, and arguably one of the most important American plays of the twentieth century, “A Streetcar Named Desire” bursts to life with passion and fire as it tells a tragic story layered in social mores, economics, self-delusion and the slow pace of change in the old south. In truth, everyone in this story operates under some self-imposed delusion, only Blanche has the courage to truly let us see behind her carefully cultivated façade.

Blanche DuBois, a school teacher with a penchant for nice clothes, handsome men, and refined living, has come to the edges of the French Quarter in New Orleans to visit her sister, Stella, and Stella’s husband Stanley Kowalski. Blanche is easily upset, with delicate sensibilities and frayed nerves, but she is neither as helpless nor as fragile as she leads others to believe. And, though she looks disdainfully at Stella’s small apartment, boorish neighbors and coarse husband, she is in desperate need of a place to stay and the familiar kindness of her sister. Blanche may “rely on the kindness of strangers,” but she depends on her sister’s unflinching support.

Stanley and Blanche take an immediate dislike to each other, and they both take out their frustrations on Stella, a woman so patient and docile that she gratefully accepts the pain each causes. Stanley suspects Blanche is less than honest about her past and motivations and Blanche finds Stanley to be little more than a brutish animal, incapable of deeper thought or emotion. Blanche's burgeoning relationship with Stanley's close friend Mitch complicates the issue, throwing fuel on the smoldering fire. The two constantly butt heads, challenging each other with increasing bite until their conflict explodes into an act of violence that forever alters Blanche.

Sophia Brown is mesmerizing as the fading Southern belle, instantly captivating both the audience and Stanley’s friend Mitch with her gentile manners, feminine swoons and easy laugh. Brown embraces the character’s complexity, allowing us to see Blanche’s affectations and manipulations as well as her slow but steady descent from reality. The audience willingly follows her lead, and the journey from sane but desperate to crumpled, lost and confused is so thoroughly integrated into the character that the conclusion almost surprises us, even as most know the story and its tragic conclusion well.

Nick Narcisi fills Stanley with virility, confidence, and a quick temper, much like Blanche it is clear he is accustomed to being the center of attention and he’s naturally king of the neighborhood. The tension between the two is palpable from their first meeting and it infects the rest of the excellent cast. Lana Dvorak is sympathetically torn as Stella, doing her best to remain loyal to the two people she loves most and cheerfully soldiering on no matter the circumstances. Spencer Sickmann is tender and heartbreaking as Blanche’s love interest and Stanley’s friend Mitch. When Blanche leaves at the end of the play, the other men stand but a distraught Mitch crumbles into himself, overwhelmed. The moment is telling – the other men have not previously treated Blanche with respect and Mitch cannot bare the reality of her current state. The only notable criticism I have of this moving and provocative interpretation is that the instances of violence feel somewhat tame rather than brutally raw; but it's a concern tempered by the realization that actor safety must come first. Still, I wanted more aggression and physicality in these scenes and felt that Stanley's final attack on Stella, in particular, could have been more forceful.

The ensemble, featuring Amy Loui and Isaiah DiLorenzo as the Kowalski's more experienced and resigned, but no less passionate, landlords as well as Jessie Munoz, Jacob Flekier, David Wassilak, Isabel Pastrana and Maggie Wininger, add depth and texture that make this show feel authentic and at once intimate and exposed, with a constant energy that permeates the air as in any crowded urban neighborhood. Each voice carries a slightly different accent, representing the unique blend of cultures in New Orleans and creating a sort of vocal. The Quarter is never quiet, there’s music coming from a local tavern, vendors selling flowers, tamales and other goods, neighbors fighting and the comings and goings of a busy city. This constant movement adds rich detail to the show, reminding us that no one is immune to time or changing fortunes, and most of the people in this neighborhood dance on the edge of disaster, seeking comfort in sensuality and blues.

When executive director Carrie Houk and her team decided to produce “A Streetcar Named Desire” for the third year of the St. Louis festival, she made two decisions that prove insightful and significantly enhanced this deeply affecting and emotionally griping drama. The first was to focus the production capabilities of the festival on this one play. The second was to ensure that the play was cast with age-appropriate actors, rather than following the trend to cast older. Both decisions proved prescient, and the results are exceptional. Brown is radiant if crazy; Narcisi is loving if violent; Dvorak is loyal if misguided; and Mitch is sincere if easily swayed. The combination of personalities and circumstances spirals out of control and we can’t take our eyes from the wreck it creates.

With a keen eye and sure hand, Director Tim Ocel ensures that not a single detail from Williams’ dense and poetic script is missed. The expanse of the stage is expertly used in James Wolk’s crowded and worn set design, every corner is filled with life and industry and complemented by Sean Savoie’s lighting and Amanda Werre’s sound design. Michele Siler’s costumes convey much about each character’s sense of self, from Blanche’s fading but polished pieces, to Stella’s simple, cheerful house dresses, to Stanley and his buddies’ bold color palette. The result is an outstanding production that perfectly captures the flavor and themes of Williams’ work. “A Streetcar Named Desire” continues through May 19 as part of the third annual Tennessee Williams Festival St. Louis. The poignant and tragic drama is smartly produced and brilliantly performed, lovers of the playwright and casual fans alike will likely enjoy this stellar show.