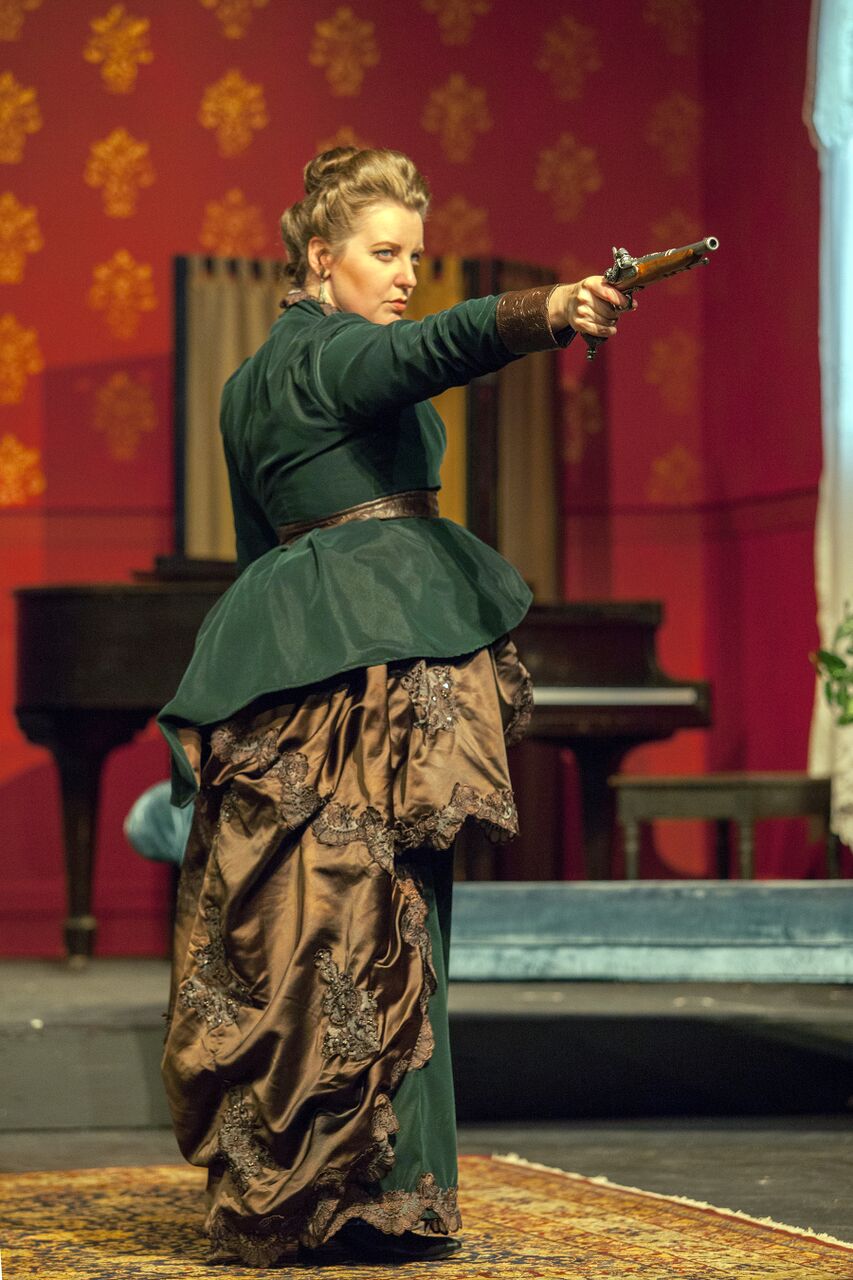 Stray Dog Theatre takes another deep dive into the work of Henrik Ibsen in a visually and emotionally compelling production of “Hedda Gabler” filled with tension and barely contained disdain. The show is rich with dark humor and cunning, and driven by a woman who seems to get everything she wants. Everything, that is, except the freedom to think, speak and act as an independent human being.

Recently married to the promising scholar Jorgen Tesman, Hedda Gabler, daughter of General Gabler, is in a state of constant malaise. She’s thoroughly dissatisfied with life even though she’s just returned from an extended, and in her opinion dreadfully dull, honeymoon. Hedda spends her days complaining to the judge, keeping the servants on edge, and backhandedly criticizing every move her husband and his doting Aunt Juliana make. Prone to pacing, she also enjoys taking aim with her father’s pistols, increasing the nervous tension everyone in her presence already feels.

When Mrs. Elvsted barges in unexpectedly, the show takes a fateful turn as she confides she’s worried about one of Hedda’s old flames and Tesman’s rival, Ejlert Lovborg. Perhaps it’s the thought that she may have married the wrong suitor, perhaps it’s jealousy towards the other woman, or maybe it’s simply a longing to be recognized as an individual beyond her use as a daughter, wife or mother. Something spurs Hedda headlong into spiteful manipulation and purposeful destruction. Once engaged, she commits fully to her scheme, ensuring that any chance of a positive ending is thoroughly and completely lost.

Nicole Angeli burns brightly in the meaty role of Ibsen’s anti-heroine. She imbues Hedda with overt disdain, but it’s grounded in intelligence and with dreadful clarity regarding her station in life. Hedda may make you uncomfortable, and there’s nothing warm or welcoming about her character, but Angeli provides depth and nuance that pulls almost unwilling sympathy from the audience. Angeli is captivatingly fierce and distant, but there’s a fire that gleams from her eyes and spreads with every purposeful move she makes.

The rest of the cast generally keeps in lock step with finely turned performances that capture each character’s unique dilemma. The desperate obeisance of Ben Ritchie’s Tesman and Rachel Hanks’ Mrs. Elvsted heighten the conflict. Ritchie is gentle but persistent and Tesman’s admiration of Hedda is not only clear, but also motivated. Hanks is sympathetic as Mrs. Elvsted, but her character is so devoted to Lovborg and his manuscript that she, too, disregards Hedda. The error in judgment is critical. Angeli’s jealousy flushes over her face as Hanks radiates with hope, and the cruel game begins.

Angeli’s encounters with Stephen Peirick, as Lovborg, John Reidy, as the Judge, and Jan Niehoff, as Aunt Juliana, add considerably to the tension while Susan Greenwald simply tries to be as invisible as possible as the maid. Peirick and Reidy create an interesting contrast of alternate possibilities for Hedda. Peirick is youthful and confident initially, but crumbles far too easily. Reidy is constant and nearly as conniving as Hedda, but he’s straightforward and coarse in ways she finds distasteful.

Director Gary F. Bell keeps the tension high with sharply pointed characters and well framed conflict as he guides the cast through Jon Robin Baitz new adaptation of Ibsen’s play. Bell uses positioning and blocking to good effect here, and several unspoken exchanges convey much meaning throughout the length of the engrossing drama. Posture, glances and gestures – even the set design and costumes – convey context that adds layers to the dialogue, making the show fly through nearly three-hours with staging that keeps the audience completely involved.

The action is nonstop in the Tesman’s well-appointed living room, designed by Miles Bledsoe, yet there’s enough room for the cast to move comfortably through the tight space. The costumes, by Amy Hopkins, provide a sense of comfortable wealth among the characters. The Tesman’s and their friends wear expensive fabrics with rich color and fine details. Niehoff’s Aunt Juliana wears fabrics of equal expense, but her color palette is muted, primarily in mourning black. Greenwald’s terrified maid wears plain cotton in faded shades of brown, but it’s clean and in good condition.

“Hedda Gabler,” running through June 23 at Stray Dog Theatre, is not always easy to watch, and some moments are downright uncomfortable; there is also the sound of a gun in the play’s final scene, it is loud but distant. The show runs longer than most contemporary productions, but Ibsen’s dark drama is as juicy and pointedly acerbic as it is sharply perceptive and every moment is purposeful. Angeli and the talented cast sink their teeth in, delivering standout performances at a pace that demands your attention.