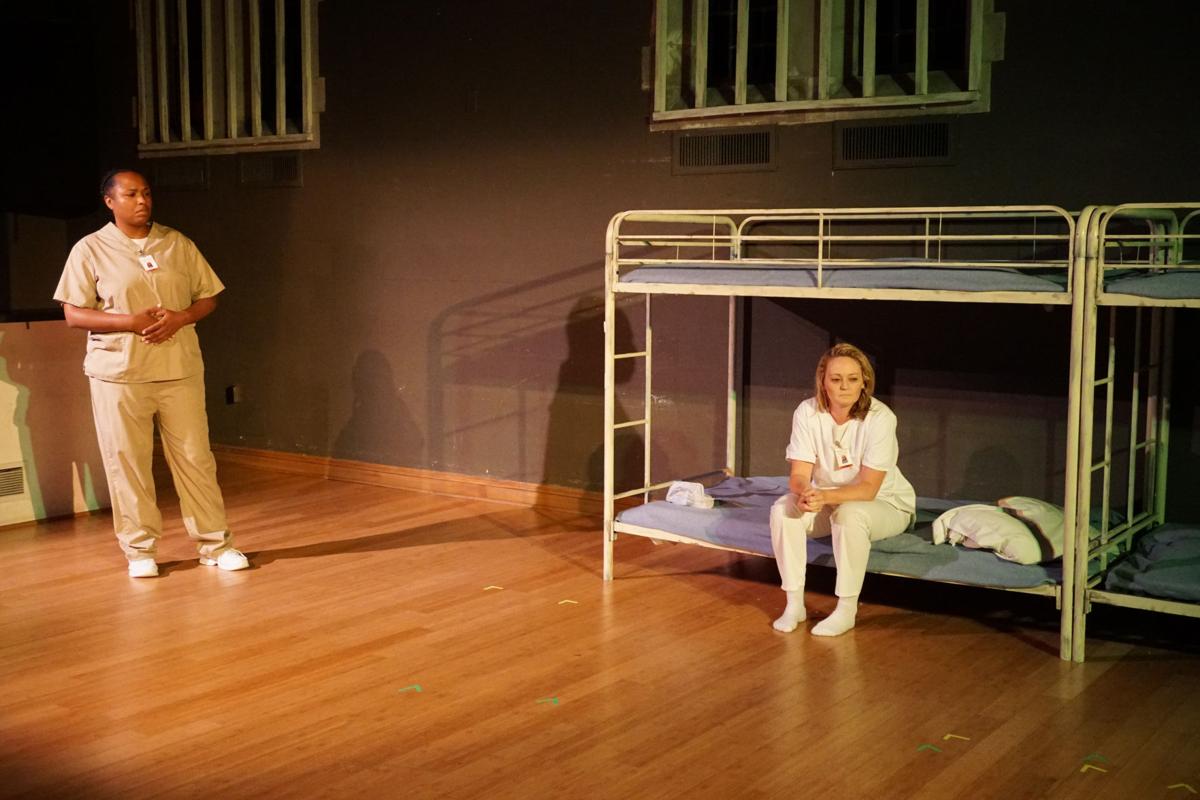 “Run On Sentence,” an original one-act play developed by Prison Performing Arts and featuring the stories and voices of incarcerated women, is frank and at times disturbing drama about the lives of the interviewed women. Originally performed at the Women's Eastern Reception, Diagnostic, and Correction Center in Vandalia, MO, Slightly Askew Theatre Ensemble gives this moving and evocative story its first professional production. Under the direction of Rachel Tibbetts, SATE tells this story in a heartfelt production that ripples with a glimmer of hope, stolen moments of comfort and the bleak realities of a life without freedom. As a member of PPA's leadership team, Tibbetts is intimately connected to the show and her passion and concern to tell these stories honestly shines through the production.

Taleesha Caturah is Mel, a woman sentenced for life for a crime she committed when she was a teenager. She’s grown accustomed to the world behind bars and has formed a substitute family with some of the women in her cellblock. Her world is turned upside down and long dormant emotions are stirred after a new inmate, Mary, joins the group. Mary tells the other women she’s been sentenced for assault, but that is only the partial truth.

Shortly after Mary’s arrival, Mel receives correspondence from her lawyer, informing her that a recent case may have some bearing on her sentence. As Mel narrates her story, occasionally adding moments of reflection and realism and introducing us to the inmates she’s grown close to, we learn why she’s hesitant to invest much energy responding to the letter. Perhaps because she’s newly incarcerated, Mary doesn’t understand Mel’s reluctance and she secretly fills out and submits the necessary forms for a case review. As she wrestles with her mixed emotions and fights feelings of hope that she expects to be dashed again, Mel also finds herself getting caught up in Mary.

Mel's cellmates Bug, Giant and Miss Alice move the story along and there’s an interesting, though underdeveloped, thread about the new officer and her attempts to define her relationship with the prisoners. The women have formed a unit where they support and look out for each other, creating a new normal life behind bars, but the longing for freedom remains. In addition to a strong performance from Caturah, Bess Moynihan, Wendy Renee Greenwood, Jamie McKittrick, Margeau Baue Steinau and Kristen Strom create solid characters and the show delves into to important and unfamiliar stories.

Tibbetts and the cast clearly connect with their characters. Caturah is intelligent and formidable as Mel. She handles the difficult dual task of leading the audience into her world and providing contextual, emotionally driven responses when in a scene with the other inmates with ease. Caturah is sympathetic and intelligent, but complicated, conveying Mel’s uncertainty and hesitation with believable fluctuation.

Greenwood is tough and quick to suspicion as the defender of the group, Bug. She’s perceptive and quick to judge or strike fear with a sharp glance, but she’s motivated by genuine concern and loyalty. McKittrick pulls at your heartstrings, and then strikes with ferocity, as the troubled and slow Giant. Steinau gives Miss Alice a sense of being very world-weary, but she’s still nurturing and looking for ways to direct her considerable energies. Strom is appealing and slightly awkward as a guard who seems more naturally inclined to being friends.

Moynihan, as the new inmate Mary, handles a very difficult part with skill. It’s hard to like Mary, she gives off an untrustworthy vibe and Bug isn’t the only one who senses it, and Moynihan is a bit uncertain at the start. Mary plays on her good looks and naively commits fraud in an attempt to be helpful. The attempt may work, but it was a foolish and risky move. Mary unravels, first with unexpected emotions and then when her truth comes out, and Moynihan’s interpretation quickly elevates. A performance that feels shaky at the outset turns into something deeply effective and quietly forceful, with Moynihan convincingly relying as much on posture and expression as words.

From a technical standpoint, the show is hindered a bit by the space. Several lengthy blackouts, necessary for a scene or costume change, interrupt the flow of the production and take the audience out of the moment. The real challenge of the show, however, is capturing the raw emotion and hard realities of life in prison.

While the company succeeds in telling the important stories, the script, by Stacie Lents feels too easy and antiseptic for the subject matter covered. The women are all soft and sociable, even the touching, simple-minded Giant, though nicely performed, feels like an expected trope in a prison story. Perhaps these personas are essentially universal in the prison population, but I want these characters to feel more organically motivated and less contrived, the story arc less formulaic. Lents is a talented playwright, several moments really sparkle with harsh reality and honest emotion, I would encourage her to push these unique characters and their stories further.

Honestly, it is hard to watch plays like “Run On Sentence” at times; the subject matter and raw emotions can be uncomfortable in certain scenes. The reality behind every scene is someone’s life, it's their story, and our prisons continue to get crowded with people who should not slip through these cracks. Though imperfect, SATE’s “Run On Sentence,” in performance through June 17, is evocative and captivating, and the moving story is quite worth watching. Caturah, Greenwood and Moynihan turn in strong anchoring performances and are capably supported by McKittrick, Steinau and Strom under Tibbetts focused direction. The show is powerful and effective and the production deserves a wide audience.