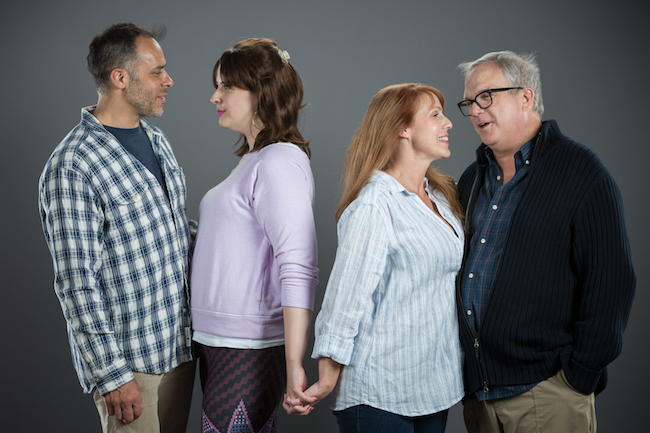 In Performance: A dark comedy and a classic musical lead this week’s opening shows

The penultimate show of the Muny’s 100th anniversary season opens this Friday and is sure to draw a big crowd, but it’s not the only show in town that’s buzzing with excitement. Whether you’re in the mood for sing along fun, existential ponderings or the delicate complexities of opera, there’s something for everyone on stage this week.

Rebel and Misfits productions presents Will Eno’s “The Realistic Joneses,” directed by Edward Coffield. The funny, somewhat surreal play explores the supposedly simple act of living and the more complex process of dying through an increasingly intertwined relationship between two couples who discover they have much more in common than their last name.

“Everyone wrestles with mortality, but there isn’t one correct way to approach life or death,” Eno summarizes. “As the particular animals we are, we can’t just walk around feeling things all the time,” he continues. “To survive, there’s a lot that we filter through. I was struck by the need to create multiple tragedies and characters as an exploration of this. It’s not too thinky, but it might be a nice welcoming and open feeling for people.”

Eno is well known for his monologues, but a fascination with “how we all do this -- deal with massive social, economic and personal changes and still raise children, care for parents and just live our lives,” inspired him. “There’s a little bit of Chekhov in there,” he confesses. “The naturalism and realism, and the fact that, for these characters, there’s nothing else to do but go on and go in to the next day.”

Company artistic director Kelly Hummert, who plays Pony in the show, welcomed the opportunity to collaborate with Eno and Coffield to bring “The Realistic Joneses” to life. “So often, we look at the world around us as if we’re flying over in a plane,” she observes. “When you’re above it all, when you have distance, things look different and perfect, but you have no idea what’s going on inside.” When audiences get a closer look, they are likely to recognize the characters and relate to their struggles.

The production has added staging elements that utilize this idea of distance as a way of entering into a very personal reality. “Will has written something that’s hugely entertaining,” Hummert explains. “As storytellers, we offer the audience a choice to simply be entertained or to go ahead and become emotionally involved.” You can make your choice by catching Rebel and Misfits Productions “The Realistic Joneses,” continuing through August 12.

The world’s most infamous stage mother returns to The Muny when “Gypsy” raises the curtain on July 27, continuing through August 2. The beloved musical introduces us to the ambitious and hard-driving Momma Rose who fights and pushes her daughters to success in an attempt to stifle her own yearnings for stardom. With one show stopping song after another, the show is a perfect choice for the big stage and will likely leave audiences thinking that “Everything’s Coming Up Roses” after all.

One of the smaller companies drawing recent critical attention, The Black Mirror Theatre continues their season with Rajiv Joseph’s “Bengal Tiger at the Baghdad Zoo,” continuing through August 4. The play, a 2010 Pulitzer Prize finalist, follows a tiger on his journey through the war torn streets of Baghdad. The tiger meets Americans and Iraqis searching for meaning and, possibly, redemption. Set in the days after the American invasion of Iraq the show is a darkly humorous metaphor for the anguish and uncertainty of war.

Union Avenue Opera premiers the second show of their season, “Nabucco,” continuing through August 4. The epic opera retells the ancient story of the war between Babylon and Jerusalem and the romance that nearly destroyed a kingdom. Nabucco, King of Babylon, is at war but his daughter and her half-sister are both vying for the love of the nephew of his enemy, the King of Jerusalem. Can peace be achieve or will the two sisters tear apart his kingdom? Featuring some of Verdi’s most admired orchestral and choral music, the show is sure to be a hit with opera lovers.

For some lighthearted fun, throw on something that sparkles and go see “Mamma Mia” at STAGES St. Louis through August 19. Set on a Greek island, and featuring all of ABBA’s biggest hits, the breezy musical winds its way through two generations of female friendship in a celebration of life, love, and being true to your self..