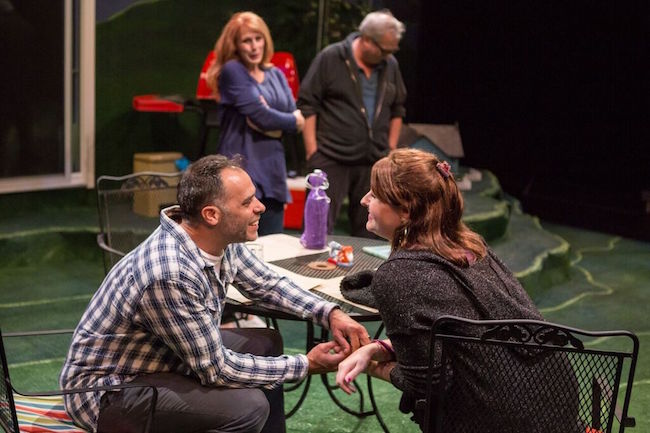 ‘The Realistic Joneses’ is an engrossing, hyperreal exploration of life and death

Rebel and Misfits Productions takes audiences on a philosophical journey through the challenges of contemporary life in an emotionally and intellectually stimulating production of Will Eno’s comic tragedy. “The Realistic Joneses” is at times uncontrollably and perplexingly funny and always heartfelt and authentic. With a refreshingly honest tone and sharply pointed but often, and purposefully, clumsily wielded dialogue, the shifting and fluid nature of the story makes you think and laugh at the same time.

Set in a cozy subdivision somewhere in America, the play introduces us to two sets of Joneses and reveals the struggles both couples face. Jennifer and Bob, slightly older and more settled, are enjoying an evening in their backyard when John and Pony unexpectedly barge in, offering the couple a bottle of wine and introducing themselves as their new neighbors. The initial conversation is a bit awkward as statements are misinterpreted and too personal questions are broached too soon.

Bob clearly finds Pony attractive, John is interested in continuing his conversation with Jennifer and Pony seems almost desperate to find someone she can connect with that isn’t her husband. There are secrets each couple holds, which they are decidedly uncertain about sharing, but it soon becomes clear that the two couples have more in common than might first appear.

Eno’s script is filled with wonderfully twisted wordplay that deftly pokes holes in our ideas about life and death, with more than a hint of scientific query and existential thought. The action in the show is measured out in small, everyday occurrences and casual conversations that unexpectedly probe for deeper meaning. Common phrases are responded to with literal intention and big, bold statements laughed off with the shrug of a shoulder in ways that are convincingly realistic and natural, and uncomfortably perceptive.

Bob is dealing with a chronic illness, John is experiencing odd and serious health issues of his own. Jennifer is dissatisfied with the state of her relationship with Bob, but she loves him and is determined to remain patient and positive throughout his illness. Pony is searching without a question. She’s both adorably naïve and painfully sensitive and aware, with a touch of manic pixie and social outcast balancing her quirky appeal. There’s a dichotomy to each character that is revealed as they continue to meet up and it’s this exploration of personality and philosophy that helps the play conjure it’s spellbinding effect. The audience is rapt, listening carefully for every shift in tone and meaningful look or gesture and laughing often, occasionally after a beat as they find the clever punch line almost hidden in the well-crafted script.

Laurie McConnell and Alan Knoll perfectly capture the ups and downs of a long, loving relationship in their portrayal of Jennifer and Bob. There’s an unspoken bond and genuine warmth to their characters that ensures they are sympathetic, even when they’re disagreeable. Kelly Hummert and Isaiah Di Lorenzo are more combustible but no less convincing as Pony and John. It feels like their love is being truly tested for the first time, though each has scars from other battles. While their attempts to support each other may be more good intention than execution, they reveal a bond that is as strong as Jennifer and Bob’s, if less conventionally apparent.

Under the guidance of director Edward M. Coffield, each actor creates a uniquely individual and believable character, and then finds moments when their traits mirror another actor’s, whether through staging, movement or reaction. These slightly different, intentionally reflected takes on our shared human condition resonate, leading to tension and release in commanding performances.

As Bob, Knoll is bumbling to the point of injury and forgetful to the point of hurting those around him, and then he turns and offers a blissfully sweet if fleeting thought. Di Lorenzo brings a physicality to John that conveys a man accustomed to action, decisive if not always well thought out movement and passionate declarations. When he crumbles it is so viscerally effective, the audience cringes with him.

McConnell’s unwavering love and loyalty is put to the test and she responds with simple, heartbreaking elegance. Jennifer is the most down to earth of the characters, you know she is strong enough to survive whatever comes her way but you want her to be able to hold onto those brief happy moments just a little longer. Hummert is mesmerizing as Pony, though at times it is easy to see why John can’t decide if he wants to shake her or hold her closer. She imbues Pony with the off-kilter sensibility of a survivor that aligns perfectly with the pearls of insight and perception she unconsciously offers. The most interesting aspect about the show’s conclusion may be the unexpected but wholly satisfying bond she and Jennifer share.

“The Realistic Joneses” is centered on Eno’s natural eloquence and the experience created by the company embodies his contextual themes of proximity, distance and perspective. Margery and Peter Spack provide a set that challenges assumptions and embraces contradiction. The actors dwarf perfect little matching tiny houses with lights that go on and off as the play progresses. The stage floor and surrounding walls represent a topographic map and colorful hanging lanterns float like hot air balloons and twinkle like stars in the night sky. It is as if the drama is captured in the spaces between the intimately personal and the comfortably distant, which is in fact where the story lives.

My one criticism of the production is that the scenes that do not take place in the backyard are initially a bit confusing to place, with the grocery store setting taking the longest to clarify and engage. The unfortunate side affect of this is that some of the dialogue at the top of the scene, needed for context, is almost lost. Considering the theater constraints and slight cumulative weight of these scenes, it’s a small price to pay in exchange for the intriguing and oddly resonant spatial relativity of the other scenes.

With an existential bent and prodding, hyper-realistic dialogue, “The Realistic Joneses,” continuing through August 12, is a visually and intellectually layered show that takes audiences on a wild ride with a startling and abrupt finish. Darkly funny and expertly paced, the emotional pull of the show lies below the surface and audience members are invited to wade in as deeply as suits their preference. Once again, Rebel and Misfits Productions presents a work that challenges audiences while providing a satisfying and comically driven story.