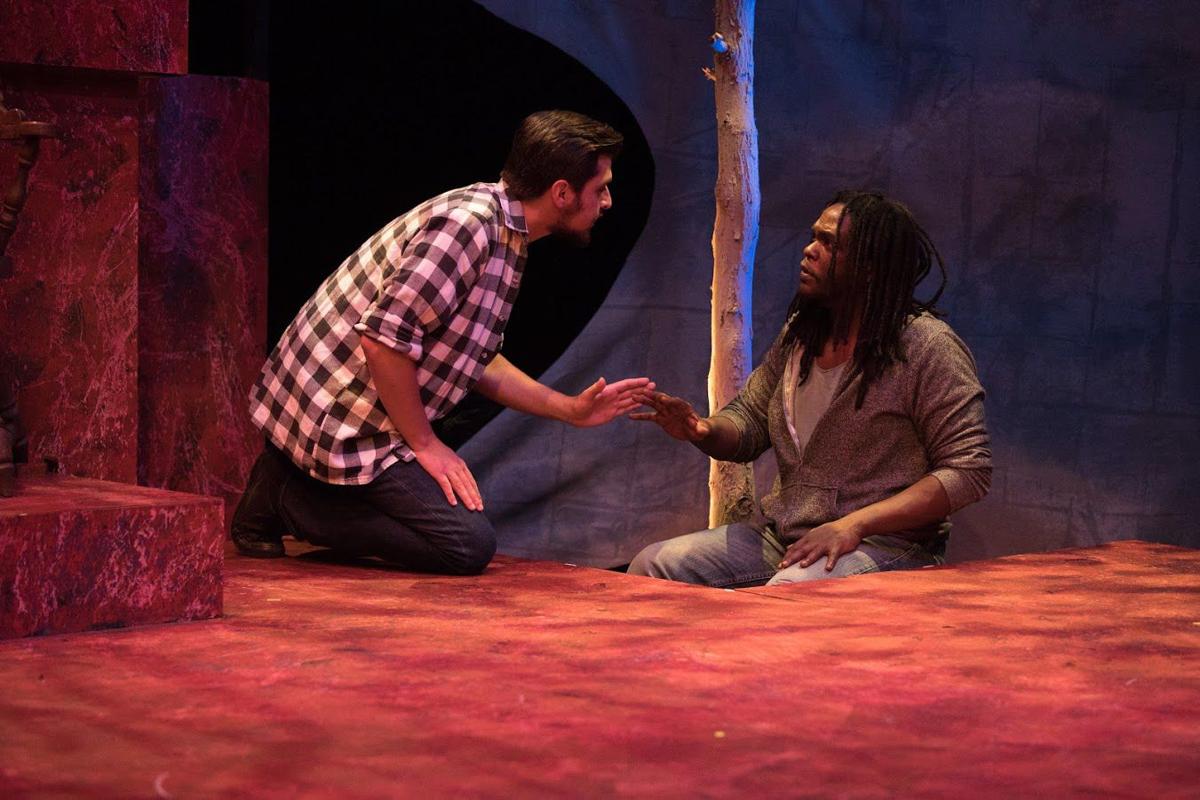 Mustard Seed Theatre explores philosophic and authentic expressions of faith in its mesmerizing production of Stephen Adly Guirgis densely comic “The Last Days of Judas Iscariot.” The sharply focused play features a central character that rarely speaks but says much through an averted gaze and subtly shifting posture; the disposition of his eternal soul hanging in a precarious position he scarcely acknowledges. The picture is powerful and the central question – is god benevolent and forgiving or a vengeful enforcer of consequences? – a worthy conundrum, regardless of personal belief.

In some mid-level court in purgatory, a disinterested judge continues his perfunctory duties without glancing up from his bench. Barely acknowledging his bailiff, he nonchalantly dismisses a suit brought on behalf of Judas Iscariot by Cunningham. The lawyer protests, providing the necessary paperwork, but the judge still resists and even the sudden arrival of El-Fayoumy, an opposing lawyer, only merits a raised eyebrow. Eventually, the case proceeds and various religious figures are called to the stand in an argument pitting the all-loving, forgiving god against the god of laws, rules and eternal damnation.

Director Adam Flores leads an exceptional cast through the deeply funny and surprisingly insightful script, but you will still need to pay attention to catch all the references and pieces in this puzzling, yet fully satisfying production. The realization of comic, fully human saints and sinners, including Satan himself, keeps the show captivating and moving at a pace so quick that the more existential questions of faith and philosophy catch you off-guard, though they are persistent and capably posited. The story proceeds with effectively pointed observations and wry humor, but these are balanced by sudden rare moments of tenderness and gratitude.

Chris Ware is silent and sympathetic as Judas, revealing deep emotional cuts, raw with guilt and lacking any motivation to defend his actions. Ware is countered by a beatific Jesse Munoz as Jesus, collecting the tears of the world with a warm embrace and gentle touch. Carmen Garcia is heartbreaking as Iscariot’s mother, her distress and concern palpable in the opening scene that frames the courtroom drama. She plays multiple roles, as do many of the actors in the production, and is surprisingly dominating as Pontius Pilate.

Courtney Bailey Parker as the lawyer Cunningham is the center of the complex story, and her belief that Judas deserves the opportunity to petition for forgiveness is its heart. There’s an earnest resilience to the character that makes you want to know more of her back story and Parker plays the room with convincing skill. Parker is the straight woman in a room full of comedians, and she holds her own with considerable spunk.

Carl Overly, Jr. is magnificent, in all ways, as the flamboyant, obsequious El-Fayoumy. He is loud, overly friendly and entitled in his approach to Cunningham and the bench. He’s also always looking for an angle to gain the favor of the judge or perhaps the star witness, Satan. Eric Dean White is straightforward, affable and cringe inducing as Satan, while Munoz captures the quiet radiance of a truly benevolent Jesus.

Rae Davis, Graham Emmons, FeliceSkye, Chelsea Krenning, Ariella Rovinsky, Chandler Spradling, and Rachel Tibbetts complete the cast, and each captures the spiritual ponderings and essential humor of the show in their portrayals. Davis is hilariously down-to-earth and filled with wise-cracking truths as Saint Monica. Krenning and Spradling are a great, underplayed comic pair as the bailiff and judge. Emmons is a sincere and amiable everyman and FeliceSkye is bitingly good as both Saint Peter and an acerbic Freud. Rovinsky is compelling and eminently watchable as Caiaphas and Saint Matthew, and her Mary Magdalene has a fiery, feminist bent. Finally Tibbetts is mesmerizing as a playful, flirtatious Mother Teresa, a humorously random but somehow on point Loretta and the curious and naturally doubting Saint Thomas.

“The Last Days of Judas Iscariot” continuing through October 28 at Mustard Seed Theatre, is a fascinating show that presents questions of fundamental belief, of the ways in which we understand, share and communicate with god, as we perceive god to be. The juxtaposition of courtroom drama with the memories of historical characters is dense and satisfying. Finally, the ending scene with Munoz and Ware provides a poignant, emotionally cathartic bookend to Garcia and Ware’s opening that reverberates. Though many of the themes are universal in nature, the intriguing play is affectingly personal, with characters that are unique and genuinely funny, yet relatable and recognizable.