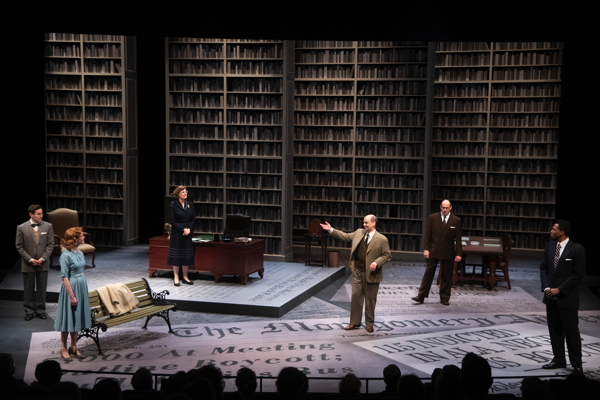 The Repertory Theatre St. Louis's production of Kenneth Jones' tale of segregation and children's literature is at once familiar and interesting, but also perplexingly frustrating. How could a children's picture book cause such an uproar?

The play recreates the standoff between a segregationist Alabama senator and the state's head librarian over a children's book, "The Rabbit's Wedding," by renowned illustrator and author Garth Williams. The storybook introduces children to two rabbits who fall in love and get married. The accompanying illustrations feature a black and a white rabbit, leading the senator to accuse both the author and librarian of trying to "corrupt" young minds into accepting integration. In an era marked by formal segregation and casual racism, making the storybook available for circulation among the state's white public libraries is an act of rebellion that nearly gets the entire library system defunded.

The play doesn't break any new ground, and is in fact another celebration of a few good white people taking a stand against racism. But it reminds us of how easily something as simple as a picture book can be used to justify deplorable behavior towards a fellow human; contemporary politics suggest this message is still important. In divisive times, stories of people reaching across these perceived boundaries are necessary, and the charming story at the center of the play finds a surprising champion in the reserved librarian.

As librarian Emily Wheelock Reed and her assistant Thomas Franklin, Jeanne Paulson and Carl Howell are bookish and introverted. Ms. Paulson brings considerable gravitas and a sensibly guarded nature to the librarian. She is not unkind nor unfriendly, but carries an air of formality about her that plays wonderfully against Carl Palmer's brusque Senator Higgins. Howell is immensely appealing as her eager but somewhat more timid assistant. Franklin's wry observations and dogged research are critical to Reed's success; she finds strength in his sincerity, he finds confidence and courage in her example.

Passionate about their work and the books they select, the two have a rewarding collegial relationship, but that doesn't prevent conflict. The scene where the two of them discuss how and why the book captured the senator's attention is tense, but never cruel or unkind, demonstrating the sense of fairness and equality the two share.

Larry Paulson is genial, gentle and full of whimsy as the author Williams. He fully embodies the attention to craft and aesthetics of a fine artist with a smile in his voice and twinkle in his eye. Palmer's senator stops just this side of buffoonish, and the actor wisely avoids contemporary impersonation. Though the moral of the play - not all southern whites were segregationists and many quietly went to battle for equal rights - is frankly overdone, the fact-based story is still quite compelling. Audience members can easily draw resonant parallels, if they choose, the production does not point fingers.

A secondary plot about the reunion of a white woman and a black man who were close friends throughout childhood is less successful. Honestly, it feels as if the playwright hastily wrote the subplot because he felt that a show about racism needed at least one character of color. Anna O'Donoghue and Corey Allen are appealing and sympathetic in their portrayal of the childhood friends, but their story arc feels contrived and "Alabama Story" may be more satisfying if the script stuck to the primary story.

The lengths the senator is willing to go to in order to maintain a social structure that benefits him while disenfranchising others is disheartening. What makes the story all the more relevant and unsettling is the fact that we haven't exactly made the progress we should in the last 50 years. The current government shutdown, centered on immigration issues framed to sew seeds of fear and distrust, seems to mirror the words and actions of the segregationists rather than reflect lessons learned. But again, this lesson is inferred and the story of the battle over the children's book is singularly engaging and entertaining.

Director Paul Mason Barnes adroitly guides the show and the transitions from the primary to secondary story are smooth, even if the two threads don't easily intermingle. Scenic designer William Bloodgood creates an imposing library book stack as the backdrop, and period appropriate furniture and costumes, by Dorothy Marshall Englis, complete the picture. "Alabama Story," continuing at The Rep through January 27, is another interesting chapter in the story of our nation's continuing struggle to truly embrace equality for all Americans. Not a bad coda to a story about two playful rabbits who fall in love.