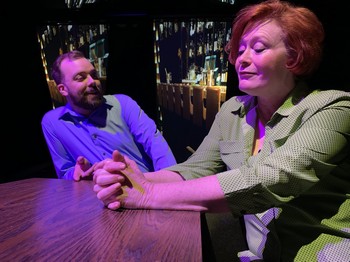 Playwright Tira Palmquist, Tesseract Theatre and director Brittanie Gunn manage to make the very data driven and fact base science of climate change interesting and relatable to audiences through a story about intersecting lives and congressional hearings. With a thoughtfully creative complexity, “Two Degrees” is fast paced and momentarily disorienting from time to time. The device works well to stir up effective dissonance, helping us understand the uncertainties and potential calamities of ignoring climate science by becoming personally invested in the inner life of a prominent scientist.

Doctor Emma Phelps is a well-respected climate scientist currently working in Greenland, but she’s been called to Washington D.C. to testify before a congressional committee chaired by her long-time friend, Senator Louise Allen. Between preparing for the testimony with Allen’s assistants and having flashbacks of her former life with her husband, in Boulder, and at the research station in Greenland, she also manages to hook up with Clay Simpson, a friendly ear and shoulder she meets in the hotel bar. She doesn’t share her work with him and doesn’t want to know about his.

Thankfully, the play takes the time to translate big ideas into plain language without talking down to the audience. Palmquist also succeeds in turning emotion into action in ways that make the characters, particularly Emma, more compelling. The story seems rather cut and dry, but it’s the layers within the characters, their intertwining personal and professional selves and the secrets that they reveal, that keep our attention. The ways each character uses the information they have to manipulate and frame their situation and the assumptions they make about one another aren’t always accurate or pretty, but they are believably human.

A powerful performance by Donna M. Parrone, as Emma Phelps, anchors the show and the other characters – Carmen Garcia as the determined but overworked and occasionally abrupt senator, Taylor Gruenloh as the smooth talking, easy to talk to Clay Simpson, and Sherard Curry as husband Jeffrey, Senator Allen’s personal assistant Wilson, and Malik, a Greenland resident she works with – orbit around her force. Each actor finds ways to internalize their character that add to the puzzle of a story, steadily building resonance as we plunge deeper and deeper into Emma’s rabbit hole.

With the exception of a few minor stumbles over laborious terms and ideas, the cast is also scientifically convincing, and Parrone bristles with genuine environmental concern as well as the conflicted passions of a lonely, grieving woman. Though Emma is nervous and a bit uncertain, she is determined to make an impact, passionate about climate change and eager to find the right words to make her points stick. But visions of the past year keep interrupting her preparation and new secrets challenge what she thought she knew. The way Emma’s personal life influences her testimony adds up to deftly realized analogies, and Parrone excels at keeping her different histories distinct, yet integrated.

Gunn and co-designer Katie Palazzola make smart and practical set design choices that keep the show brisk and help resolve the feeling of disorientation that adds to our understanding of the story’s psychology and science. The set also enables Parrone to remain on stage the entire show, even changing her costume pieces behind a logically drawn curtain. There’s a lot to unpack in Palmquist’s script and Gunn and the actors consistently make choices that keep the audience fully engrossed in the story,

“Two Degrees,” which closed on March 17, is a surprisingly compelling and clear-headed description of climate change delivered through intentionally and perfectly imperfect performances that command attention from start to finish. The show also represents the end of an era as the company switches its production focus exclusively on the development of new works presented in a single new play festival. Tesseract Theatre’s inaugural Festival of New Plays debuts three new plays over a two-week period beginning May 15, 2019. While I wish the company every success and will definitely be in the audience to review, I have always appreciated their commitment to new works and will miss seeing a production from the company every few months.