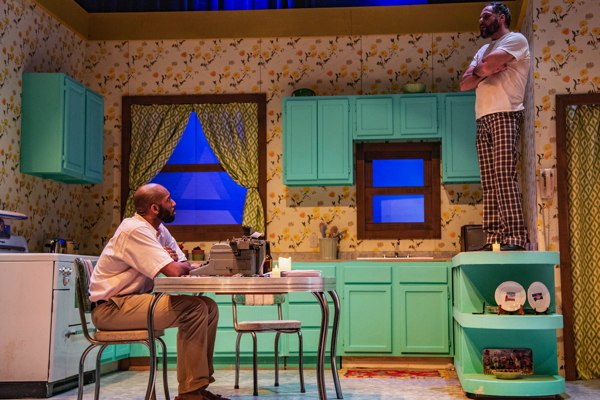 Sam Shepard's tale of sibling rivalry and dysfunction crackles with raw energy and grand schemes gone awry in St. Louis Actors' Studio's riveting and menacingly hilarious production. Directed by William Whitaker and starring Isaiah Di Lorenzo and William Humphrey as the brothers at the center of this contentious story, "True West" is outrageously funny, but also perceptive. Even when the play veers close to chaos, the script still offers subtle commentary on our definitions of freedom, success and independence, and the juxtaposition between the ideal and reality.

At first glance, the brothers seem as different as can be. Humphrey's Austin is an educated, married with children screenwriter living in relative comfort in Southern California. He dresses and speaks well, he's also much quieter and more reserved than his brother. Di Lorenzo's Lee is less educated, less settled and considerably less comfortable. Untethered by the constraints of modern life, he's a small time criminal with exaggerated pretensions, simmering resentment and a fondness for burglary and gambling.

The two men are currently staying at their mom's house while she is on an extended trip to Alaska. Austin's stay was planned - he's watering the plants and watching over the place while working on a screenplay that's this close to getting picked up. He doesn't know why Lee showed up, but he's certain his brother is up to no good and it's immediately clear Lee isn't planning on leaving any time soon.

Humphrey and Di Lorenzo spar with believable sibling chemistry, layered with admiration, jealousy and animosity that keeps bubbling over until it explodes in a glorious mess. The dialogue is sharp and filled with longing as each man wants what the other appears to have. And, though traditional signs of affection are lacking, it is clear that there's a connection between the two men that encompasses complex feelings, including love. None of those considerations slows the constant bickering, even when they are seemingly in agreement.

Humphrey moves with casual elegance and a certainty of purpose he wears like a comfortable sweater. He perfectly captures the sense of nurturing that's ever-present in Austin, and a longing for acceptance and affection that's beautifully, achingly expressed when he tries to offer Lee some toast. Di Lorenzo is manic, always chattering and looking for an angle he can exploit. Quickly moving from one big flawed idea to the next, his thoughts are never complete or finished, his ideas amorphous and grandiose. But in an unguarded moment, he reveals genuine warmth and begrudging respect as he chides his brother for wanting to run away and live in he desert.

For most of the show, however, the brothers are at each other's throats, often in realistically hilarious and precariously dangerous ways. The two are constantly competing and repeatedly exchange verbal jabs. When a drunken Lee pontificates that he could write a screenplay just as well as Austin, Austin declares he could burglarize houses as well as Lee in reply. Lee scoffs at the idea, telling Austin he couldn't steal a toaster, which naturally fuels Austin's determination to prove himself.

The brothers ratchet up their rivalry when Austin's agent Saul, a fickle and easily amused William Roth, decides to pick up Lee's far-fetched movie concept. Throwing salt on Austin's wounded pride, Saul insists that Austin write his brothers script as a condition of moving his own script forward. Austin begrudgingly but doggedly agrees to help Lee; he continues trying to make something out of his brother's scattered story idea even after Lee destroys his typewriter.

Tensions build, tempers flare and before long mom's house is filled with toasters, empty bottles of beer and liquor and two grown men tearing into each other tooth and nail. The action rarely lets up, even when mom, a wonderfully nonplussed Susan Kopp, returns home. Humphrey and Di Lorenzo embrace the excesses of their characters in mesmerizing, memorable performances.

Di Lorenzo and Humphrey are in rare form as they romp through sibling rivalry and self-destruction that hints at a larger national conflict. Do we actually embrace rugged individualism, nonconformity and self-reliance? Have we grown complacent wrapped in education, commercial success and material comforts? Reverberating with an ideological conundrum still present in the United States and an absurd but somehow believable story, "True West," continuing at St. Louis Actors' Studio through April 28, is a raucous tale that's curiously satisfying, laugh out loud funny and incredibly cathartic.