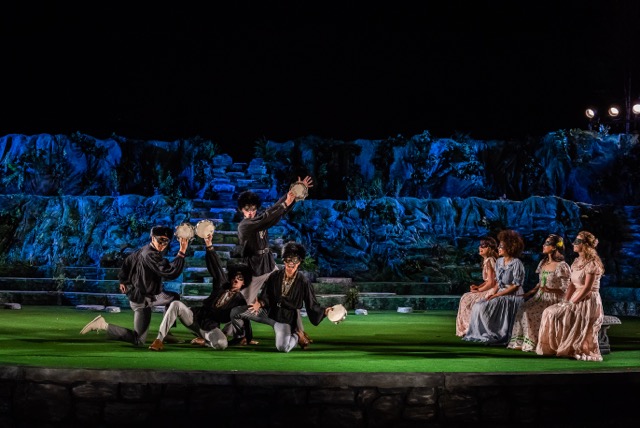 Shakespeare Festival St. Louis dives into the deeply funny waters of the Bard’s romance in an over-the-top comedy on the pursuit of love and happiness. “Love’s Labors Lost” is a sparkling production that perfectly synthesizes the many romantic storylines into a sharp, engaging show, with strong performances throughout the ensemble. The fast moving play is stuffed with clever wordplay, both low brow and high, and guided by crisp, purposeful direction from Tom Ridgely. Original music by Matt Pace and Brien Seyle, frequently played on stage, adds a perfect chord to the playful frolic in the park.

Just as King Navarre and his three closest friends, Longueville, DuMaine and Biron, make a vow to remain cloistered together in their studies for the next three years, avoiding the company of women in particular, he’s reminded that the French Princess is en route to his castle to negotiate the possession of Aquitaine. Naturally she brings her three closest friends with her and the love connections are almost instantaneous. Aware of the King’s vows, the ladies decide to make sport of the men, who, for their part, are each absolutely certain they can outwit the women. A host of comically exaggerated attendants and commoners, including the unlikely triangle of Armado, Jaquenetta and Costard, mixes in for fun. Unexpected news received during the closing scenes postpones the royal couple and their attendants’ happy ending, but even that isn’t enough to dampen spirits.

Bradley James Tejada is captivating and persuasively charming as the glib Biron, the only one of the King’s friends who raises any objection to their vow, though he signs on. Laura Sohn is a perfect foil as the smart, sharp-tongued Roseline, countering his every argument with a witty objection. The two command attention and the audience can practically see the sparks flying from either side of the stage at their first encounter.

Sky Smith and Kea Trevett are well matched as the King and Princess, each fluid and graceful, wisely demurring to their close friends in this fanciful battle of gender and wit. Sam Jones, Vivian Claire Luthin, Kiah McKirnan, and Riz Moe complete the royal entourage with style and clarity. As the Princess’ attaché, Jeffrey Cummings is a slyly influencing Boyet who’s made more interesting by his gleeful participation in the matchmaking game.

Patrick Blindauer and Naima Randolph steal several scenes as Costard and Moth, with deadpan, down-to-earth humor and logically twisted responses to questions posed. Philip Hernandez gleefully chews the scenery as the desperately in love Armado, and his Conquistador uniform conjures Don Quixote. The cleric and tutor, played by Katy Keating and Carine Montbertrand, offer charming commentary using the most elusive words they can find in a verbose tennis match that’s complemented by their meandering strolls among the shrubbery. Carl Howell and Michael James Reed capably round out the spirited cast.

In addition to the performances, which verge on enchanting in this coyly fantastic production, all the technical aspects support and enhance the story and tone. Jason Simms’ easily shifted, naturalistic set design is a perfect royal garden and woods, particularly when surrounded by picturesque Shakespeare Glen. Melissa Trn’s costumes reference multiple eras without clashing and the color palette and touches of whimsy keep to the light mood, while Rusty Wandall’s sound design and John Wylie’s light design provide excellent finishing touches.

Shakespeare’s characters are rich and varied in a charming show that’s brimming with tension and humorous jibes among the sexes, and both genders land successful, if mostly comic, blows. The characters range wildly, from the stately but still blushing-with-youth court to the language-obsessed cleric and tutor to the flamboyant Armado, foolish but perceptive Costard, giggling Jaquenetta and clever pageboy Moth, to the rather dull, Dull. With such variety, language and misunderstandings become lyrical fodder for a play that spills forth with a poetic rhythm, and director Ridgely keeps a close eye on every detail while ensuring that the metered script never comes across as sing-song or choppy, except by intention.

“Love’s Labors Lost” is not performed as frequently as other Shakespearean comedies, perhaps due to the less certain, lingering limbo of the ending, and that’s a bit of a shame. The more realistic, less fantastical conclusion sustains the whimsical tone the rest of the play carries, making the delightfully light and comic play a perfect choice for an entertaining evening in the park and one of my favorite productions from the company.