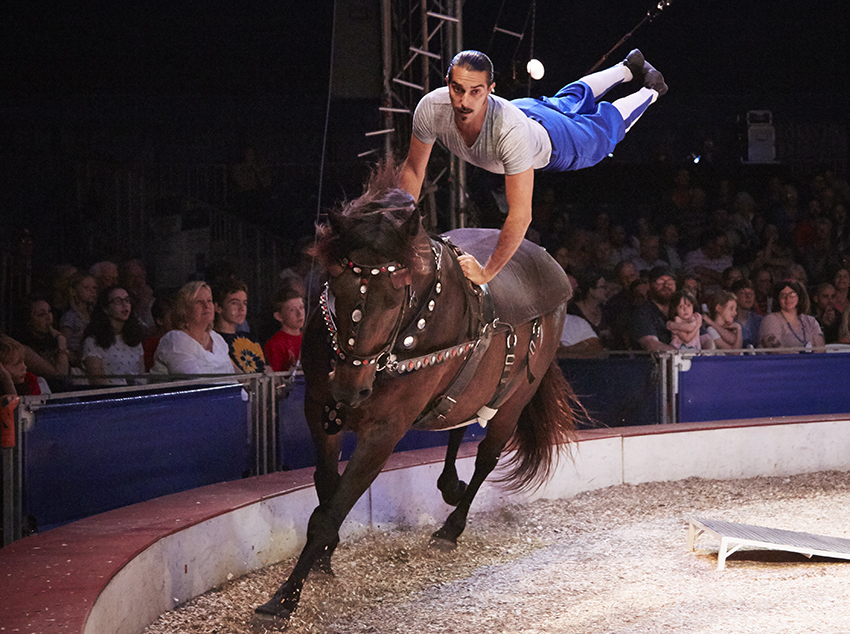 ‘The Caper in Aisle 6’ presents a simple but clever story illustrated by high-flying, gravity defying acts

Circus Flora presents a new adventure under the Big Top in Grand Center as they spin the magically fanciful tale of "The Caper in Aisle 6." Narrator and featured performer Cecil MacKinnon, as Yo-Yo a harlequin-styled clown, tells of a time when the air contained a mysterious element that enabled humans to fly above the ground just as easily as you and I walk around today.

At some point the element disappeared from the air. Humans returned to terre firma and forgot about their ability to fly, except perhaps during their dreams. That is until sometime in the recent past, when a manager at the local Schnucks market accidentally over-ordered sardines. In an effort to boost sales, the manager presses loyal employee Gloria to eat several of the little fish. After a grimace, followed by a shake and a shimmy, Gloria finds herself lifting off the ground. The sardines contain the mysterious element and Gloria is flying just like our distant ancestors! The manager plots to stockpile the sardines and use them to power a new delivery service, but Gloria thinks that everyone should have the opportunity to experience flight.

This is Circus Flora, however, so the story is brought to life by a cadre of talented, athletic artists who spin on hoops and silks suspended in midair, walk and bicycle across tightropes and swing and fly from the trapeze. In addition to the aerial acts, there are tumbling, flipping and balancing acrobats and talented humans, dogs, pigs and horses who jump across gates and leap through hoops. There’s even slight of hand, juggling and some funny audience interaction, including a mini-musical melodrama that is unexpectedly hilarious. All these elements come together in a charming and easy-to-follow show that zips along at a comfortable pace.

The design of this year’s show seems to emphasize moves and holds that create wonderfully balanced structural elements. The Nemean sisters, Juliana Richards and Katherine Sokolowski, open the show with an ethereal aerial ballet that reinforces the sense of flying through the air the story introduces. This year’s St. Louis Arches – Dennis and Philip Bailey, Jahlah and Michael Baum, Iason Ioannidis, Sarah Kuhlman, Oliver Layher, Finn Mateo McNamee, Ethan Ryan, Sabrina Skaggs, Rykardo Martinez-Lopez and Kyran Walton (under the direction of Jessica Hentoff) - are among the strongest and most talented class of kids and young adults. Their artistic pyramids defy gravity while thrilling the audience. Trio Bellissimo, Anna Liapunova, Anastasia Permiakova and Nadiia Kotliar, twist and turn themselves into moving sculptures, displaying incredible power and flexibility as well as beautiful artistic interpretation.

Juggler Kellin impressively keeps seven pins in motion in a humorous and entertaining set and Duo Ikai, Ilya Kotenyov and Artur Ivankovich, impresses with a new act that includes acrobatic moves performed while launching each other off a see-saw like bounce board, known as a teeterboard. Hogdiggitydog Show features Hans Klose, Colleen Pages and their many terriers, poodles and a couple assorted breeds as well as two fully grown pigs who twirl, leap and jump with precision. Caleb Asch is the daring horseman, with Renny Spencer providing guidance as he completes back flips and Flying Dutchmen leaps while galloping around the ring on two regale geldings. And, naturally, Tino, Olinko, Aurelia, Alex, Claire, Marcus and Matteo Wallenda are the Flying Wallendas, a mainstay of Circus Flora that never ceases to induce appreciative oohs and ahhs with their daring dashes across the tightrope. They are joined high above the circus ring by trapeze artists the Flying Royals - catcher Justin Chodkowski and flyers Aston Neves, Paul Schimmel, Jason English, Sokolowski, Richards and Sarah Piepho - who dazzle the audience as they effortlessly spin and leap from swing to swing, leaving the audience speechless with awe and admiration. The Circus Flora band, under the direction of Janine Del'Arte, highlights every transition and big move, guiding us through the show with snappy, upbeat music and appropriately big flourishes that encourage engagement and applause.

Sometimes there are misses as the acts attempt difficult moves that require precise timing and execution, but even the attempts are glorious expressions of movement and artistry. The audience seems to inherently understand this, cheering failed attempts and encouraging the performers to keep trying, creating a moment of connection for everyone in the tent. The intimacy of a one-ring circus adds to the excitement and ensures the audience is invested in the success of the performers, which may be a little overwhelming for some. Parents may want to check the website for details and the dates of peanut-free and other special performances.

Circus Flora's “The Caper in Aisle 6,” continuing through June 30th under the Big Top in the Grand Center Arts District, is a tight, well structured story that uses puns and clever set ups to introduce each act without forcing them into the plot. Overall, the circus features more focused action and quicker transitions that smoothly move from act to act. That combination, plus sparkling costumes and a lively band, captures the imagination. Simply put, there’s something for everyone in the family to enjoy in the fast moving, spectacular show, though audience members under about age three may become a little fidgety. Circus Flora once again combines artistry and awe-inspiring athleticism with a witty story to laughs, gasps and cheers of appreciation.