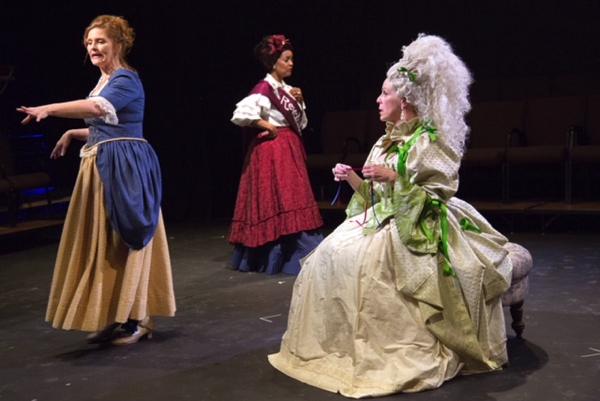 'The Revolutionists' at Insight Theatre Company is a revisionist romp

"The Revolutionists" takes place during the French Reign of Terror in the late 18th century and centers on the relationships between four women, three of them historical figures and one a fictional creation. The play is full of anachronism, irony, and humor. The script feels a bit flat at times, however, due to repeated moments and an unclear through line. That said, its finale is beautiful, and this production, particularly through its acting, largely smooths over the flaws of the script.

Jenni Ryan plays Olympe de Gouges as a fearful, educated armchair activist who struggles throughout the play to write a play worthy of revolution. The script never gives us concrete stakes for what happens if de Gouges writes the play or not, but Ryan manages to keep the audience invested in her character and finds subtle ways to differentiate the script's recurring arguments. Though Ryan finds depth in Gunderson's depiction of de Gouges, the script's portrayal of de Gouges as someone afraid of politics does a disservice to the actual woman whose entire oeuvre was full of social critique, from pre-revolutionary writing to her magnificent Declaration of the Rights of Women and the Female Citizen. In fact, "The Revolutionists" puts a line into de Gouges mouth that she is simply copying Thomas Paine's Rights of Man and changing the gender instead of giving de Gouges credit for her work. Similarly, the script portrays Charlotte Corday as a fairly one-note, high-strung though hard-core assassin and elides any of her political thinking. Great acting by Samantha Auch dives in and out of the humor of the script's portrayal of Corday and shows the audience Corday's genuine wounds, anger, and an inner life. Laurie McConnell does fantastic work as Marie Antoinette, registering an addled monarch often through nothing more than a small gesture and reedy voice. Finally, Kimmie Kidd, as Marianne, a fictional abolitionist from the French colonies in what is now Haiti, provides a political and emotional weight to the production through an extremely affecting performance of mourning.

Trish Brown's direction keeps the pace of this show very lively, allowing the actors to quickly trade witticisms, both to each other and the audience. Brown wisely starts the show at a breakneck speed that comes crashing to a halt for a deserved dramatic contrast by the end. Each of the actors is allowed, in the finale, to demonstrate a great deal of range from a near farce to a tragedy. It is in the end that the audience sees most clearly who these historical women were, though glimpses of them are seen in Brown's direction throughout when the script's past brushes up against the present, particularly in lines about the oppression of women.

The set by Leah McFall is effectively minimal, utilizing only a few well-chosen pieces of furniture with the audience in the round. The furniture is set across the diagonals, primarily a plush ottoman, a period-looking writing desk, and a chaise lounge, which allowed clever blocking and a clear sense of place. The costumes by Julian King were the highlight of the design given their layered, textured, period look that felt completely appropriate to each character even when actors stood inches away from the audience. The forward momentum of the play was interrupted from time to time with unnecessary blackouts to move furniture, and overly literal sound and projections hampered the otherwise abstract world that McFall created. The lighting by Morgan Brennan lit the audience as well as actors in its general wash, which to me symbolized the idea that de Gouges was including us, the spectators, in her play. It could, however, be distracting seeing the audience as clearly as actors across the space. That said, Brennan's lighting was quite effective when it was focused, and was an essential part of play's emotional core.

This production is an opportunity to see a female quartet of fantastic actors portraying formidable women from history in a witty, anachronistic comedy. Though, for me, the most compelling parts of the play were the moments when the play's past intersected with our current political situation, particularly the powerful ending.