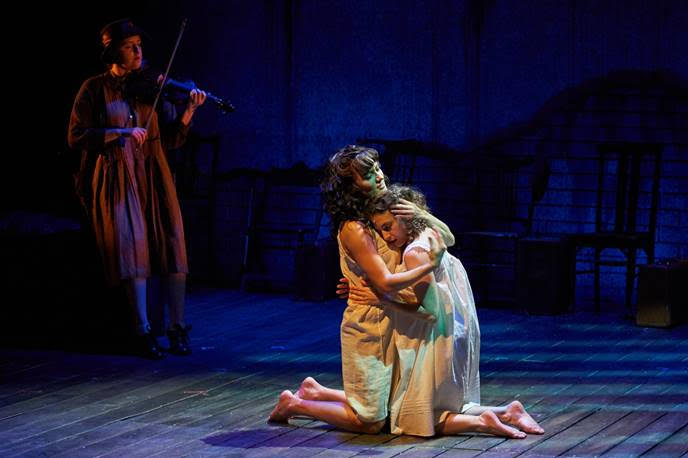 ‘Indecent’ is a story of censorship and love told with grace

Director Joanne Gordon and Max and Louie Productions stir up a variety of emotions with their captivating production of the ensemble-focused “Indecent,” by Paula Vogel. Vogel’s play explores the production and censoring of “God of Vengeance,” a play written in Yiddish by Polish-Jewish author Sholem Asch that premiered in 1906.

That play details the lesbian love affair between a Jewish brothel owner’s daughter and one of the prostitutes and opened to much acclaim, with successful runs of the original Yiddish version throughout Europe and the United States. In 1923, even after questionable script changes were made, the English language version of the show was shut down, and the actors arrested and charged with indecency, during its run in the United States. Vogel’s play, which chronicles the history of "God of Vengeance," resonates with dark truths, both religious and political, as it reconstructs important moments in the original work’s development and popular production.

Told in a series of flashbacks with excerpts from the original script, the play is a moving reflection of a Jewish family living in Europe at the onset of the 20th century who found success via unconventional means. The hard pressing show reflects their beliefs while also questioning the morals and cultural norms of the time. An ensemble cast turns in inspiring, fully realized performances under Gordon’s sure hand, with the majority of the actors convincingly portraying multiple roles.

TJ Lancaster serves as our primary point of reference as the stage manager Lemml, turning in an effectively sympathetic performance while maintaining his position near the center of the action. Paul Cereghino and Zoe Farmingdale are vivacious and engaging as the theatrical troupe’s ingénues, Katie Karel and Tim Schall graceful as the middle-aged actors, and John Flack and Judi Mann delightfully varied as the elders. The actors assume different personas, as necessary, to convey the story of the play over a nearly 50-year span. Farmingdale and Karel are particularly touching and fully committed to each other as the lesbians in the Asch script. Their scene in the pouring rain, near the end of the play, is one of the most stunning on-stage expressions of love I have ever witnessed.

Cereghino is captivating as the young Asch and Avram, and humorously on-point as American playwright Eugene O’Neill, while Schall, Flack and Mann expertly capture the wisdom and worry of more experienced performers. Flack resonates as the playwright during his later years as well as the angry father in "God of Vengeance," and each actor has a moment of authentic pathos during the mesmerizing and quick moving production. A live band featuring musicians Alyssa Avery, Kris Pineda and Jack Theiling completes the ensemble, adding texture and focus with the distinct tones of traditional Klezmer and folk music.

A dark backdrop, essential props and wooden chairs that are easily reconfigured to indicate different locations and scenes completes Dunsi Dai’s moodily appropriate set, and the aforementioned rain effect is a technical achievement of breathtaking beauty. Patrick Huber's evocative lighting, Teresa Doggett’s period costumes and wigs, Phillip Evans' sound and projections by Kevin Bowman add the final touches, creating an atmosphere that envelops and draws the audience in to the tense and sometimes brutal story.

“Indecent,” which closed June 30, is a riveting, emotionally compelling play based in history that will likely stir emotions from empathy and anger to tender reverence. The performances are strikingly well integrated, and the transitions and language approach smart and smooth, ensuring the fact-based show thoroughly compels as it weaves its fascinating tale. The exceptional production is another example of Max and Louie Productions commitment to telling important stories through elegant and thoughtful interpretations. Patrons who appreciate attention to detail, craft and storytelling are encouraged to follow the company and put future productions on their "must see" list.