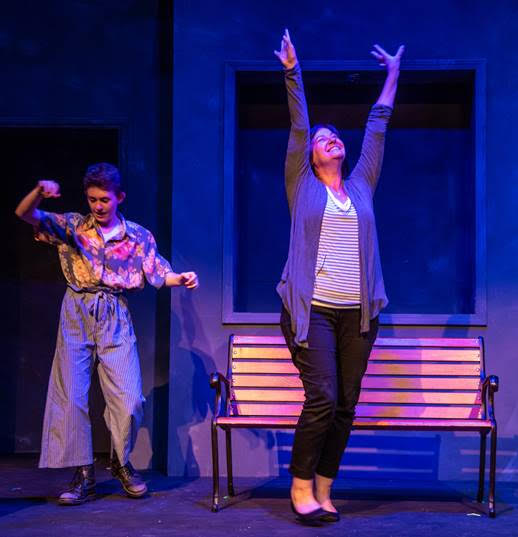 St. Louis Actors’ Studio opens Set I of the LaBute New Theater Festival with four striking pieces: “Great Negro Works of Art” by Neil LaBute and “Kim Jong Rosemary” by Carter W. Lewis, directed by John Pierson, and “Color Timer” by Michael E. Long and “Privilege” by Joe Sutton, directed by Jenny Smith. While none of the plays are without their issues and several of the scripts come across as intentionally petulant in tone and voice, the performances are strong, the direction sharp and the subjects broached are of contemporary interest and relevance.

“Great Negro Works of Art” opens the first set and plunges the audience directly into an unsettling conflict. Jerri, an attractive white woman played by Carly Rosenbaum, is meeting up with Tom, a black professional played by Jaz Tucker, for a first date at an art museum. Jerri has chosen this exhibit because Tom is black, though she initially doesn’t reveal this fact. Tom is running late due to a work meeting. Full of apologies, he thoughtfully stopped for flowers and tries to use humor to deflect the tension, but it doesn’t work. Jerri is entirely humorless and uninformed. The tension escalates from there and the date quickly implodes.

LaBute’s point in the piece seems to be that the world today is over sensitive and likely too politically correct. He positions Jerri as manipulative and quick to resort to defensive anger, with no redeeming qualities, and Tom as a bland black man with a nondescript job and personality. Despite interesting, well-crafted dialogue and a number of salient moments, the show feels more like a tone-deaf lecture from a privileged white male than storytelling.

“Color Timer” presents another awkward first date. This time the woman, a reality television producer played with a smug attitude and excessive vocabulary by Colleen Backer, is at dinner with a liberal professor, played by a confused but earnestly nebbish Shane Signorino. The back and forth between the two is delicious and quite funny, with the stakes elevated by Rachel Bailey’s flirtatious waitress.

Backer’s character quickly reveals that she is planning to kill her date and open fire on everyone in the restaurant – unless Signorino can change her mind. There’s considerable dark humor in Long’s piece and a situation that is plausible if unlikely, but a bit of dialogue tightening would help the creepy but funny story.

“Privilege” introduces audiences to Peter White, played by the always-captivating Spencer Sickmann. Called before the bar for a character evaluation that reveals an important secret in his family’s past, he’s unnerved by the intensity of the questioning. As Peter’s uncle, Charles Brinkley is doggedly persuasive in his defense of “rallying around the family.” Rosenbaum bristles as Peter’s cousin, eventually blurting out an angry slur about the young gay man, now an adult played by Signorino, who was victimized by the event.

The script infers that Peter may also be gay, though Sutton never clearly states this, focusing instead on distraction and deflection. Unfortunately, the choice of the family’s last name leads to an incredibly uncomfortable moment that turns the attention away from a compelling story about culpability and tolerance.

The final piece in the first set, “Kim Jong Rosemary” is a quirky and somehow uplifting comedy featuring Smith as the mother of the talented Eli Hurwitz, making their professional debut in an impressive turn, and Backer as a female personification of the male author Lewis. Smith and Hurwitz’ characters are hanging on by a thread and mom’s bag of issues threatens to sink, or at least significantly weigh down, their attempts to move forward.

The story comically touches on the anger and repression many women spend their lives trying to manage, and Lewis acknowledges he really has no answers and doesn’t completely understand women. There’s a lot of good dialogue and scene work here and the piece is generally funny and warm, but feels incomplete.

It is interesting and disappointing to note that all seven plays in the two-part festival appear to be written by white men. I wonder if this is because playwrights who are women or persons of color are hesitant to submit to the festival due to its close association with the controversial LaBute, and I continue to believe the company is likely doing more harm than good by remaining so committed to the playwright. Still, though the finalist’s submissions are a bit uneven, the short plays in the LaBute New Theater Festival Set I, continuing through July 28 (with the first set concluding July 14), are decidedly provocative and guaranteed to start some interesting, potentially important conversations.