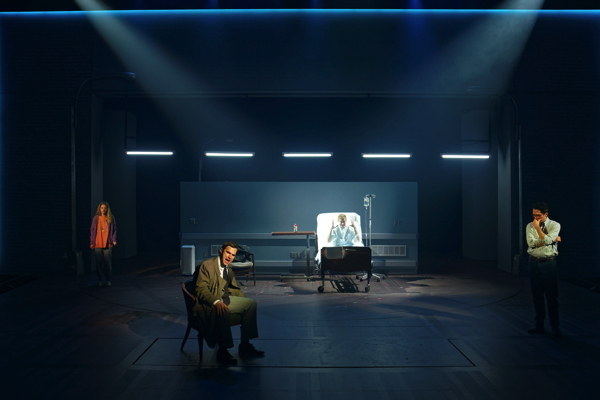 The Repertory Theatre of St. Louis opens its season with a remarkable and nearly flawless production of Tony Kushner’s “Angels in America, Part One: Millennium Approaches.” With LGBTQ themes and a chronic disease (that continues to devastate lives) at its center, Kushner’s opus shines a beautifully nuanced light on the serious business of love and sex, and life and death in the gay community.

The moving and provocative show is expertly guided by director Tony Speciale and assistant director / violence, intimacy and movement director Tommy Rapley, who employ a purposeful touch and clarity to elicit deeply connected performances from every actor. The acting is, in a word, superb. Restraint and control are key to the Rep’s production and the resulting performances are naturally inflected interpretations of the script that feel authentically derived, even during the more stylized fantasy moments.

Part one of the two play set introduces us to four gay men at the center of the story: Louis and Prior, a couple in a committed relationship that’s threatened by Prior’s deteriorating health; Joe a married Mormon man fighting his true self to maintain the rules of his religion; and the famously abrasive lawyer Roy Cohn, who insists to his doctor that he is not a homosexual - in spite of the fact that he has sex with men - and further insists that his life threatening diagnosis is liver cancer.

Finely tuned, thoroughly integrated performances bring these characters to life with touches of genuine humor and pathos. Barrett Foa is heartbreaking as Prior, his moments of flamboyance more armor than exaggeration. He’s paired perfectly with Ben Cherry as a surprisingly sympathetic Louis, a Jewish man racked with guilt because he cannot face his partner’s progressing illness. Louis is pitifully verbose as he tries to talk his way around several truths, just as Jayson Speters, as Joe Pitt, tries to dance around his identity to reconcile his faith. Peter Frechette is a marvel as Cohn, somehow managing to cajole us into caring about the offhandedly brutish lawyer. The four actors create fully realized people in their portrayals, avoiding the stereotypical and revealing considerable pain and thought. Frechette exemplifies this in a telling scene with Joe, a smile on his face and in his voice as an absolutely wrenching and honest moment of despair and disappointment flashes by so quickly it’s almost imperceptible.

Meredith Baxter, David Ryan Smith, Valeri Mudek and Gina Daniels round out the exceptional cast. Baxter, who has the credentials for top billing, loses herself in each character as she seamlessly transitions from a forgetful rabbi to a stridently convicted Ethel Rosenberg to an overbearing but never cruel or uncaring Hannah Pitt. Smith brings a ray of hope as Prior’s best friend and a fiendish glee as Mr. Lies, Mudek is heartbreaking and eerily accurate as Joe’s pill popping, disassociating wife Harper Pitt and Daniels is cheerfully caring and concerned as the nurse and transcendent as The Angel. Without over acting, every glance, breath and syllable matters and there isn’t a single beat that is thrown away.

In addition to the performances, well choreographed scene changes and effective use of the theater’s lift and turntable, by scenic designer Tim Mackabee, ensure every moment of the show is visually compelling and fully intertwined. Smart projections, by Alex Basco Koch, add to the tone while reinforcing the exposition, and the lighting design, by Xavier Pierce, successfully directs focus. The sound design by Broken Chord includes original music that is intriguing and atmospheric, and the costumes, by Dede Ayite, help us understand each character from the inside out without distracting from the compelling performances. The Angel is spectacular and awe-inspiring as she crashes through the ceiling, Ayite and director Speciale effectively referencing classic art in her style and pose. There were a few minor mistakes opening night, primarily issues with the follow spot and the very occasional line slip, but the show moves with the grace of a ballet and the emotional punch of a prize fight.

Simply put, “Angels in America, Part One: Millennium Approaches” captivates from the rabbi’s first words to the ethereal embrace of The Angel. “Angels in America, Part Two: Perestroika” debuts this weekend and the two plays continue in repertory through October 4. Artistic director Hana Sharif has set the bar for her tenure at the Repertory Theatre of St. Louis quite high with this opening selection, I genuinely look forward to seeing her vision unfold throughout this season and well into the future.