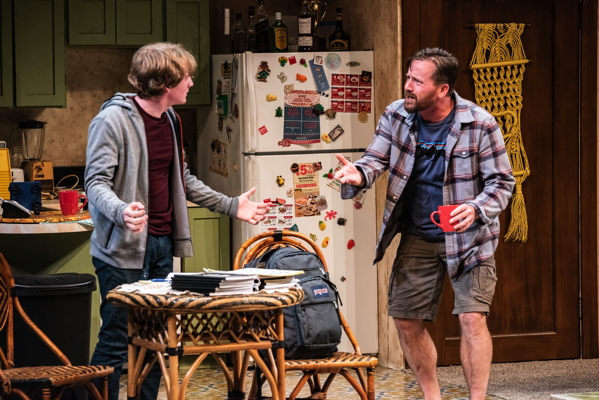 Fascinating and resonant, ‘Lifespan of a Fact’ is a fast paced examination of truth

What, exactly, constitutes a fact? Is there any room for flexibility or interpretation? And how important is the absolute truth of information - or facts - if one is writing a powerful essay filled with ideas that speak to broader truths?  How do journalistic standards, societal norms and expectations of veracity influence the writing of a piece that’s based on facts, and filled with intentional, if imprecise, metaphors and persuasive literary connections?

These questions aren’t about “fake news.” Rather, they’re at the heart of the Repertory Theatre of St. Louis’s fascinating production of Jeremy Kareken, David Murrell and Gordon Farrell’s play “Lifespan of a Fact,” directed by Meredith McDonough. Based on actual events, the show compresses the seven years’ long efforts of writer John D’Agata and fact-checker Jim Fingal to ready an essay for the magazine The Believer into a single, increasingly fraught week. The quick moving play is an intellectual tug-of-war between the writer and fact-checker, with editor Emily Penrose trying to provide balance and meet the deadline.

The essay, about a young man’s suicide in 2002, is intended to strike at deeply rooted truths about life and society. Because the piece was rejected by a different publication, the magazine’s editor wants the story’s facts checked one last time. She calls the head proofreader looking for someone to provide a quick fact-check before sending the magazine to print, and the inexperienced Fingal offers to do the job.

Griffin Osborne is mesmerizing as Fingal, a recent Harvard graduate and intern hoping to earn a permanent position at the magazine. Naturally he jumps at the opportunity to work on D’Agata’s feature piece. Rather than simply follow up on spelling and verifying a few dates, he gives his all to the assignment. Attacking the assignment with dogged determination that borders on obsessive, he soon has a spreadsheet full of questions he can’t satisfactorily resolve. When Penrose suggests he reach out directly to the author, she unleashes a back and forth struggle between the need for facts and the desire to create a story of importance and lasting impact. Fingal, eager to prove himself, and D’Agata, a gifted and established writer, find considerable distance and tension in the grey area between fact and truth.

Osborne’s characterization is quirky and somewhat socially awkward, but absolutely determined to reconcile the story to the fact. The approach is a wonderfully sharp contrast to Brian Slaten’s brusque, confident to the point of dismissively arrogant D’Agata. There’s a hubris to Slaten’s characterization that leans towards jaded and acerbic, and it’s quite enjoyable to watch the actor open the character just enough to reveal how much the fact-checker’s questions and criticism stings. The actors bristle with combustive chemistry as the two men wrestle over definitions and tumble into the philosophic at breakneck speed.

Perri Gaffney, as editor Penrose, works to keep peace between the men and a focus on getting the essay to the printer on time, but even she gets caught up in the tug-of-war. Gaffney deftly shifts gears and sympathies in an attempt to find agreement, while also acknowledging her hesitation to publish the piece as received. The performances are realistic and the stakes high as accuracy and little details about each character spill left and right. The result is a mesmerizing story that demonstrates time and again that facts can be anything but mundane.

Thoroughly engrossing, “Lifespan of a Fact” ran through November 10, continuing the intriguing and entertaining slate of productions selected by first year artistic director Hana S. Sharif. Up next, the romantic charn of Jane Austen’s “Pride and Prejudice” comes to the main stage just in time for the holidays. The Rep celebrates the author’s ongoing popularity by hosting a Jane Austen Festival opening weekend if the play, December 6 - 8.