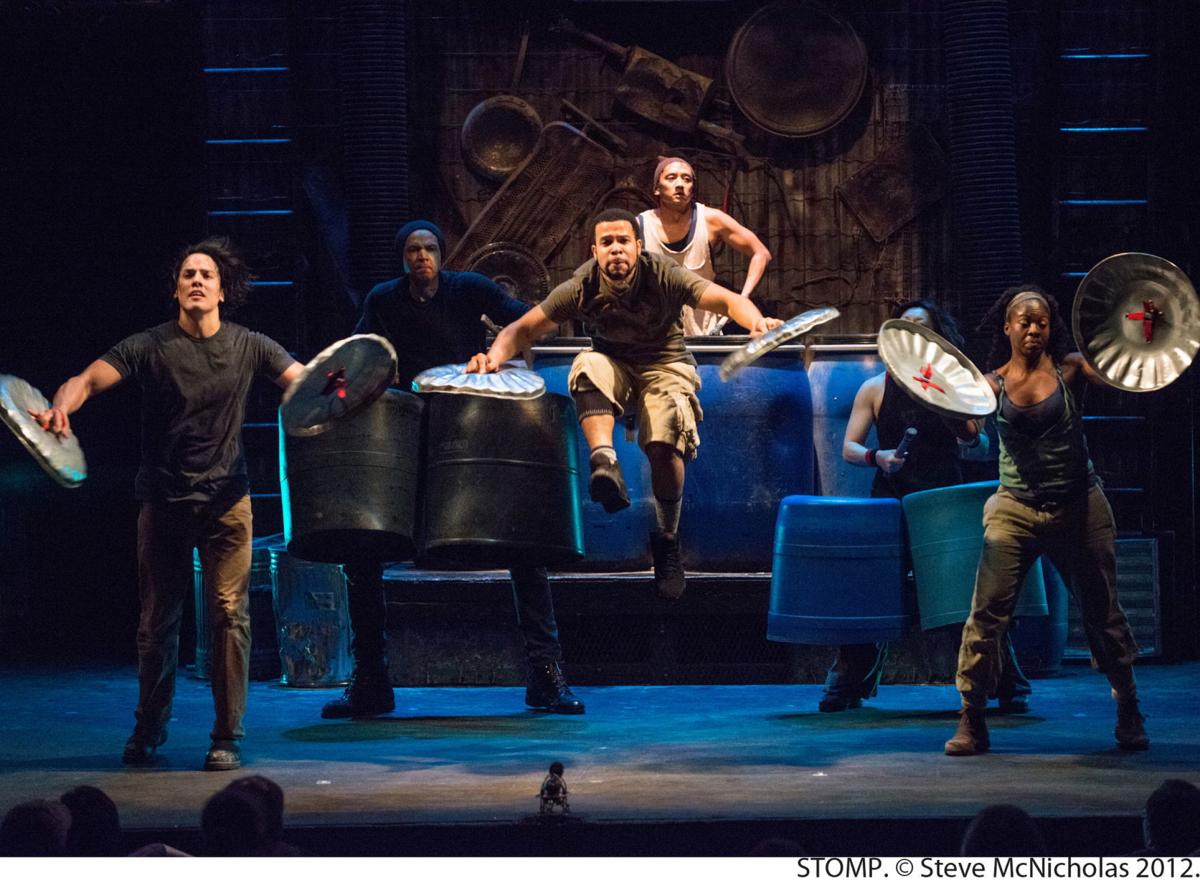 Musically compelling and visually captivating, ‘Stomp’ is good, clean and loud fun for the whole family

The dance and percussion event known as “Stomp” brought fans at the Fabulous Fox Theatre to their feet during its short, action-packed run. Tap and acrobatic, athletically demanding modern dance movements mix with precise percussive runs to create a theatrical musical event that really connects with audiences. The latest version of collaborators and directors Luke Cresswell and Steve McNicholas opus features more audience interaction, humor and individual personalities. The additions ensure the show is appropriate for most of the family, though ear protection is recommended for younger and more sensitive family members.

“Stomp” is, after all, a percussion performance. The noise level and intensity builds nicely from the rhythmic brooms and bell-like ring of dustpans to louder more resonant “instruments” like rubber and steel barrels, street signs and metal trash cans. The action and decibel level tops out at a high level in an exciting, multilevel piece. Two artists hang above the scaffolding and floor, suspended from chain link fencing as they and the rest of the ensemble create beats then dance and, well, stomp their way through the euphoric number. The sense of freedom and movement reverberates through the theater and audience in a happy cacophony.

But I'm getting ahead of the show, which has a satisfyingly structured build, as each movement features a different common “found” percussive instrument. Most compositions appear to build organically – an effect requiring considerable practice and experience to achieve. Brooms brushing and pulling across an elevated sound enhancing dance floor, with some shuffling steps, then add a layer of sand or gravel, like another instrument in the band. The next movement increases in volume and definition as the sharp whack and bouncy thump of the broom handle and base are added into the mix, along with some more staccato tap moves. The performers move with a chip on their shoulder, like a neighborhood gang that’s still establishing itself, but there’s plenty of humanizing charm, humor and confident temperments in the ensemble.

Though some of the performers take a more central role in the audience interaction and visual storytelling, this edition of stomp is an ensemble of individuals. I’m pleased to see women and people of color among the talented cast, as well as man buns, nerdy glasses and anime-influenced hairstyles. As importantly, each performer has developed a believable personality and character within the world they’ve created. I remembered the show being more uniform, with static emotions and I thoroughly enjoyed watching the performers interact with each other and the audience. There’s a sense of playfulness to a lot of the show, even when the performers – Jordan Brooks, Joshua Cruz, Jonathon Elkens, Jasmine Joyner, Alexis Juliano, Riley Korrell, Serena Morgan, Artis Olds, Sean Perham, Ivan Salazar and Cade Slattery – are executing complex, harmonic compositions and movements.

The set, consisting of the dance floor, scaffolding and a multitude of loose items that are quickly moved on and off stage with well choreographed precision, are well lit by Steve McNicholas and Neil Tiplady’s mood-setting design. The two do an admirable job of both directing attention and creating tension that helps keep the audience engaged. And it shouldn’t go without notice that the audience is another integral element of the show at “Stomp.” From some initial hesitant clap and response to enthusiastic bursts of applause and back again, the ensemble uses audience energy and reception to add to the interest of the show. During the performance I attended, a number of audience members tried to revive the participatory clap at an inopportune moment. One of the performers paused, made a distinct stop motion, and then resumed his part in the show without breaking character or the beat. It was not the only seemingly in-the-moment exchange, but it was the most abundantly clear sign that the show did more than just break the fourth wall. And it was genuinely funny.

“Stomp” is a fast moving, beat changing dance and percussion show that can really capture an audience attention and almost demand that you move along to the beat. The current iteration has a lively, playful personality that freely engages with the crowd, creating a more visceral experience that still manages to deliver jaw dropping moments. There are some surprisingly melodic pieces in the show, such as the symphony of accordion-fold style tubes and hoses – think the vent hose on a dryer or flexible plastic tubing. During a few key pieces, the spotlight ended on a lone character on stage, providing punctuation to a more thoughtful section.

The playful use of common household and scavenged items maintains the production’s gritty, street-smart heritage, but the show has transformed itself. Without losing any of the intensity of the original, the rhythm and dance production has changed and evolved with the time and audiences. The unspoken storyline builds slowly in the tradition of a “dumb show,” an exaggerated mimed performance created to communicate to large audiences without the use of microphones, expressing an emotional reason for kids and families to jump in and they do so with enthusiasm. “Stomp,” was presented by the Fabulous Fox Theatre November 15 – 17 and is on a North American Tour through spring 2020.