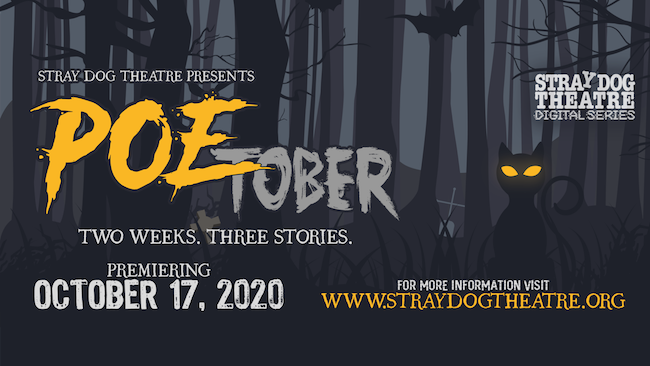 Halloween may feel a little different in 2020, but it certainly won’t be overlooked in St. Louis. Stray Dog Theatre celebrates the season with “POEtober,” dramatic readings of three of author Edgar Allen Poe’s best-known works. The selections are his poem “The Raven,” performed by Gerry Love, and the short stories “The Murders in the Rue Morgue,” performed by Laura Kyro and “The Tell-Tale Heart,” performed by David Wassilak. Directed by Gary F. Bell, with sound design by Justin Been, the audio performances elicit eerie chills with a delightfully different theatrical offering that’s suitable for all but the most easily frightened and children younger than about eight.

Poe’s language is rich with vivid description, emotional context and wordplay, as well as layers of detail to unravel. Though the structural elements of his stories are instantly recognizable to modern audiences, Poe’s creations are among the best and earliest examples of their genres. The pieces each create a different kind of tension while delivering solid chills, and are enhanced by strong casting and direction. Consisting of four recordings ranging from 15 to about 35 minutes, the length is suitable for enjoying all in one evening or over multiple nights, whichever suits your schedule.

“The Raven” is perhaps Poe’s most famous work, and director Bell’s introduction provides the interesting back-story on why Poe chose this bird to deliver his message. The sorrowful poem about longing and death straddles the transition from classic romanticism to a more modern poetic approach, albeit in small ways; and the language is alive with a beautifully bittersweet mix of emotions. Love brings the appropriate gravitas and complexity to the poem, with a slight caw when he speaks for the Raven that adds texture to the evocative piece. Alliteration, rhyming and a distinct use of rising and falling rhythm are hallmarks of the work, and Love and Bell hit all the right notes.

One of Poe’s earlier pieces, “The Tell-Tale Heart” introduces the listener to the Gothic horror genre. The dark story builds in suspense and uncertainty as it reveals the murder and dismemberment of an old man by his close associate, the story’s narrator. The narrator may get away with murder if his guilty conscience doesn’t completely drive him mad; it’s appropriately creepy and thoroughly captivating. Wassilak’s delivery is heightened by a pervasive but subtle sense of dread from the very first line that builds in intensity to a rhythmic, viscerally satisfying implosion. He perfectly captures the giddy egotism and loss of control of the increasingly erratic and self-defeating murderer, and Been’s sound design is a necessarily incessant and particularly effective addition here.

Considered the first modern detective story, “The Murders in the Rue Morgue” introduces ideas and storytelling tropes such as summarizing clues the audience can’t see (or may have missed), using investigative jargon and offering succinct, plausible explanations for seemingly brilliant deductions. Poe’s approach was so successful that the formula is still used for numerous procedural and crime dramas, both on television and in the movies. Skillfully voiced by Kyro, who personifies multiple characters while creating a solid, immediately recognizable narrator that capably guides us through the story. The first sidekick to a genius detective, the unnamed but constant companion starts off soft-spoken and cheerful then becomes more forceful and fully invested with each twist and turn. The approach works to grab and hold attention as the details are slowly doled out and examined by the detective. The story also features the introduction of the hyper-observant detective archetype. We’ve come to know this character as Sherlock Holmes, Jessica Fletcher in “Murder She Wrote,” Veronica Mars, or Shawn Spencer in “Psych,” but the type was first defined and personified by Poe’s C. Auguste Dupin.

Stray Dog Theatre’s “POEtober,” continuing through October 31, harkens back to days when people gathered together around the radio to listen to serial dramas and mysteries. In today’s uncertain times, with celebrations postponed or of the drive-by variety, popping some corn and turning up the speakers as you listen in with your family or quarantine buddies is one more way to enjoy the spooky season. Bell, Been and the actors capture the timbre and texture of Poe while showing welcome restraint in their flourishes. Best of all, the stories retain their ability to enthrall and entertain, particularly in a format that encourages the audience to add detail through their imagination, making the satisfying tales a fabulous Halloween treat for most revelers.