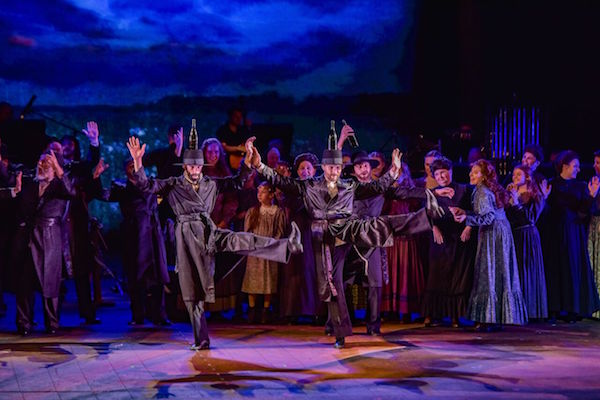 'Fiddler on the Roof' remains a bittersweet yet heartwarming musical gem

The first act of Fiddler on the Roof draws to a close just as dusk turns to night. The traditional chuppah over the bride and groom, the rustically simple but effective set, and the lighting design bouncing off the trees, create a scene from a post-card picture wedding. And, then, the near-celestial harmonies of "Sunrise, Sunset" slowly roll over the audience like a light breeze, wrapping the crowd in a reverent silence. It's moments like this, when theater and environment coalesce with perfect timing, into which indelible memories are carved.

Fiddler on the Roof is the much-loved tale of the humble and reverent dairyman Tevye, his wife, and daughters. A poor but respected family in the small Jewish town of Anatevka; they are concerned by the Russian soldiers' occupation of the village, struggling to survive, and faithful to the core. Michael McCormick is vivacious and spirited as Tevye. He's perfectly balanced by both the lithe and musical Andrew Crowe, as the fiddler, and the earthy and nurturing Anne L. Nathan as his wife, Golde.

McCormick and Nathan have voices that complement each other well, with a similar everyman quality, while daughters Haley Bond, as Tzeitel, Briana Carlson-Goodman, as Hodel, and Carly Blake Sebouhian, as Chava, stand out for superior tone and range. Their voices couple well with Alan Schmuckler, as Motel, Marrick Smith as Perchik, and Colby Dezelick as Fyedka. Nancy Opel is chatty and gregarious as Yente, Peter Wagner is gruff but reasonable as Lazar Wolf, and Jerry Vogel and Jeremy Lawrence, as Mordcha and the Rabbi, respectively, have several comic moments that add to the sense of close kinship that inhabits the show.

At its heart, Fiddler on the Roof, book by Josef Stein with music by Jerry Bock and lyrics by Sheldon Harnick, is a story about faith, family, and community. There's an imperfect honesty to the characters and the lives they lead, and the show is refreshingly clear sighted in approach and emotional context. Tevye's conflict, watching him argue and balance his adherence to the traditions of faith with his love for his daughters and learning, is central to the story. McCormick is fluid and compelling as the patriarch, and his affection for the role radiant. As the fiddler, Crowe is mesmerizing, with a beguiling almost daring attitude.

The capable ensemble is a pleasing mix of singers and dancers who skillfully mirror the emotional shifts of the show. Emma Resek and Elise Edwards are adorable as youngest sisters Shprintze and Bielke. Zoe Vonder Haar, Zachary Daniel Jones, Ben Lanham, April Strelinger and Taylor Elizabeth Pietz, making her MUNY debut, are among the local favorites in the ensemble. Strelinger and Polly Butler Cornelius have nice solo moments in the gossip song, and Pietz's soprano is a distinct and pure touch among the Villager harmonies.

Dance captain Michael Biren effortlessly leads the ensemble through Alex Sanchez's elevated traditional dance, which references ballet and modern techniques. "To Life," featuring the Russian dancers, and "The Wedding," including the bottle dance, are crowd-pleasing standouts.

In an unexpected and refreshing twist, the orchestra, under the direction of Brad Haak, is seated at the rear of the stage. In addition to providing an unexpected visual addition, the placement affords a number of interactions that subtly add to the sense of an established, interdependent community. This touch, along with Amy Clark's costumes and John Metzner's wigs, as well as the aforementioned lighting, by Rob Denton, and sound, by John Shivers and David Partridge, add texture and an environment that shades the musical in a natural, warm palette.

All the favorite numbers from the original show receive rich renditions, kicked off by the fiddler's haunting melody. "Tradition," "If I were a Rich Man," and the humorous "Tevye's Dream" get lively rousing interpretations. While "Do You Love Me," and "Far from the Home I Love" benefit from a plaintive, poignant touch and personal inflection. The new piece, "Any Day Now," feels a bit long, because it's not familiar, but fits in and adds to the show, providing a glimpse into the love between Hodel and Perchik that motivates her leaving her home. The simple and effective "Chavaleh," is a surprising revelation, at least for me. The song is bittersweet and the accompanying modern dance influenced choreography poetic.

The theme and setting of this musical are not conducive to a happy story, but it is heartfelt and reassuring, ensuring it's suitable for the whole family. Though the family and village face challenges, and must grapple with the meaning of the political changes around them, the story retains a sense of optimism. During times of uncertainty and fear certain traditions endure, celebrating the resilience of faith and the human spirit. With a spectacular setting, and clear, focused direction by Gary Griffin, it is easy to understand why Fiddler on the Roof, running through August 5, 2015 at the MUNY in Forest Park, has taken a place among America's enduring musical classics.