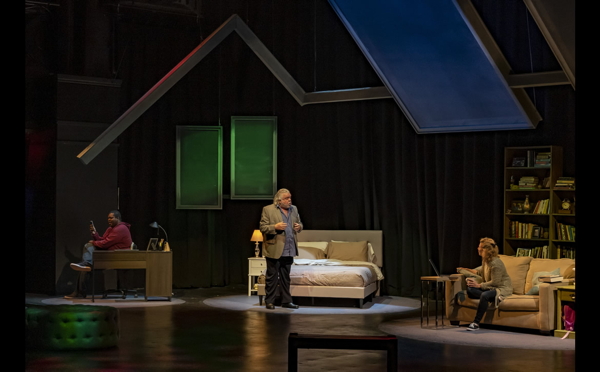 Love. Pain. Forgiveness. These three simple words that pack so much meaning are at the heart of Max and Louie Productions’ “Tiny Beautiful Things.” The play, by Nia Vardalos, is an adaptation of Cheryl Strayed’s book of the same title. The semi-autobiographical novel offers advice and confession culled from the letters Strayed responded to during her stint as the columnist ‘Sugar.’ The tone is personable and inviting -- a mix of a diary and “if I were in your shoes…” life lessons.

Under the direction of Sydnie Grosberg Ronga the chatty and intimate show is a lightly affirming conversation that provides more emotional lift than script may earn. As Sugar, Michelle Hand is welcoming and warm. Her earnest delivery never fails to convey genuine concern. Playwright Vardalos voice is prominent in the adaptation and could suggest certain stylistic choices. To the benefit of the production, Hand and Grosberg Ronga resist mimicry. Instead, Hand is open and humble. Offering a friendly shoulder and compassionate ear. Sugar’s advice is always that of an imperfect human responding to each situation as best she can.

Greg Johnston, Wendy Renee Greenwood and Abraham Shaw provide the voices of Sugar’s letter writers, both the advice seekers and the curious regular readers. Without making eye contact, each connects directly with Hand when their letters are read and visibly, though generally non-verbally, reacts to the other letter writers. The commentary is an important and quite enjoyable element to the quick paced show. With varied accents, gestures and posture, Johnston, Greenwood and Shaw create distinct characters the audience instantly recognizes upon their return.

Dunsi Dai’s comfortably lied-in modern set looks like someone’s home while creating unique spaces for Sugar and her letter writers. This idea of space and distance is important to maintaining the wall between the columnist and letter writers. That distance is emphasized by the precise wandering paths followed during the short queries and responses, and by Patrick Huber’s unobtrusively purposeful lighting design. The costume design by Eileen Engel, props design by Katie Orr and sound design by Phillip Evans finish off the unspecified but contemporary tone and feel of the show.

The themes of love, pain and forgiveness are constants throughout the multiple scenes, and always accompanied by a call of resilience and encouragement. Hand finds a way to alter the delivery, or emphasize sub-context, to keep the message from sounding too preachy or optimistic. For a few beats every now and then, Hand lets us see what she doesn’t say, such as when a quick memory flashes across her brow before she offers a succinct reply. Or when she silently winces and tears up at another’s pain before collecting herself and showing kindness. In these moments, Sugar’s own vulnerability reminds her not to judge and Hand telegraphs that complexity with remarkable finesse.

All these perfect touches ensure that Max and Louie’s production is entertaining and heart warming, rather than the treacle the script aims to deliver. Instead of empathic and reassuring, Sugar’s stories can easily come across as if she’s trying to one-up the letter writer. A privileged white women saying to a stranger “Oh, I hear you, I really do. Now, be quiet, listen to my story and then do what I tell you to do.” Though not intentional, and at least partially the byproduct of an adaptation remaining faithful to the source, the show veers uncomfortably close to pretentious at times. Even with a lead actor as talented as Hand in command of the room.

To be clear, the letters and Strayed’s lived experiences absolutely reaffirm that we have much more in common than we often choose to see. Or remember. Or think about. Vardalos is quick to recognize that, and she creates scenes that offer a lesson with the story arc. From the standpoint of the script, the show feels like someone is poking you with good intentions and self-affirming anecdotes until you give in. As the conclusion draws closer, even the cursory applause between scenes may feel a little obligatory.

Thankfully, Grosberg Ronga, Hand and the supporting cast consistently choose to challenge the obvious in the over-crafted script. Hand finds nuance, and unexpected moments of reflection and hesitation that cause the actor representing the letter writer to flinch. She slows the personal down and feels each memory, showing us the emotional toll. Select moments of physical connection between Sugar and her letter writers are executed with purposeful brevity.

“Tiny Beautiful Things” succeeds best when it shows the audience its pain and vulnerability. As Sugar, Hand captivates with her usual easy charm and reassuringly open tone. Working with Grosberg Ronga, she delivers a performance that intentionally avoids the soapbox Vardalos’ script longs to climb. As a result, Max and Louie’s more vulnerable and less certain production offers the kindhearted advice the show intends.

Performances of “Tiny Beautiful Things” continue through August 8th at The Grandel Theatre in Grand Center. For more information: maxandlouie.com