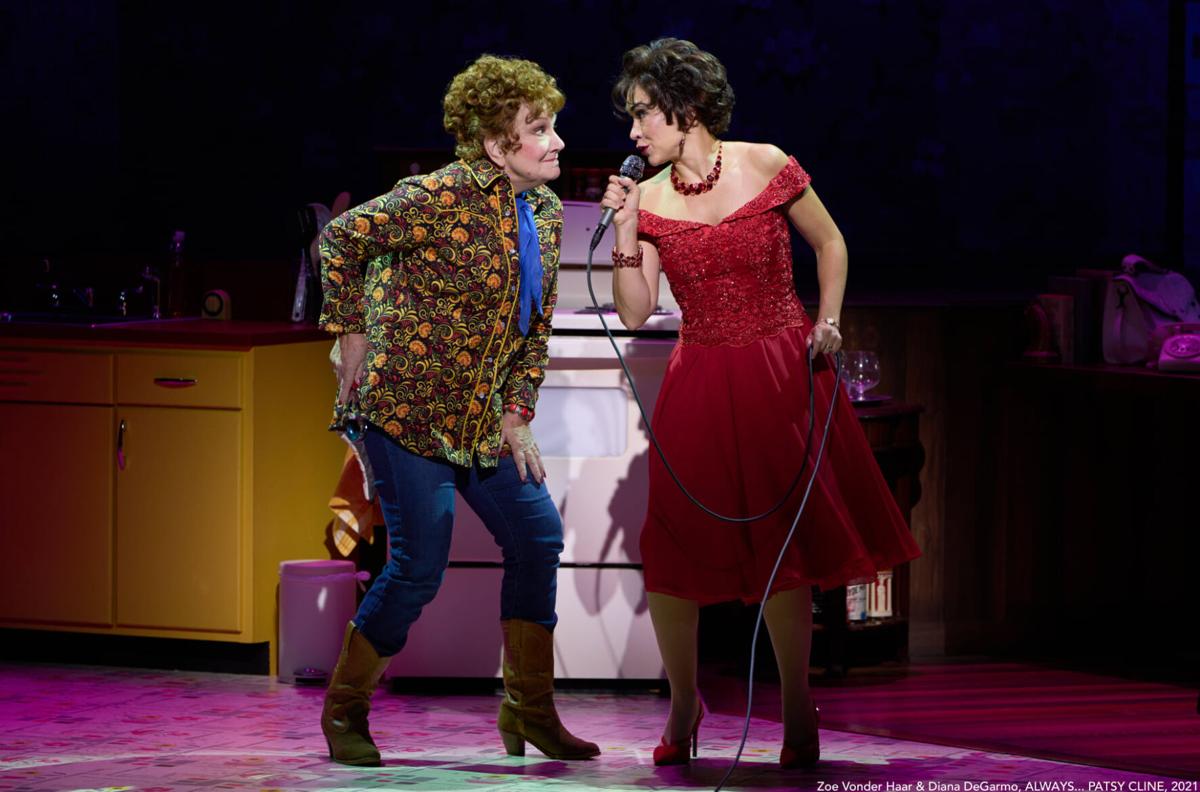 STAGES St. Louis welcomes theatergoers and music fans to their new home with a production of the much loved ‘Always… Patsy Cline.’ A valentine of a jukebox musical, created in memory of a rising star who left us too early, the show is full of one unforgettable song after another. Even audience members born well after Cline’s untimely death at age 30 in 1962 can appreciate the distinct style and emotional resonance of her music.

There’s a narrative around the songs about a Texas housewife and fan that became Patsy’s friend and pen pal after a memorable meeting at a dance barn. Zoe Vonder Haar plays Louise Seger with over-the-top aplomb, relishing her country girl in the spotlight moments and flirting with audience members. Vonder Haar gives Louise a personality as big s the state of Texas and her broadly physical comedy suits the show. There are a few moments when her antics are a bit too distracting, though never mean spirited or in poor taste. There’s also a genuine sense of caring camaraderie between Louise and Patsy that consistently shines and their duets are well balanced, with just the right twang.

But it’s Patsy Cline we’re here to see, and American Idol finalist and Broadway standout Diana DeGarmo does not disappoint as the country singer with a rich voice and distinct yodel. A relative newcomer to the role, DeGarmo impresses with her commitment to sustaining an authentic drawl and, even more importantly, capturing the intonation and emotional nuances of each number. Her take on the opening “Sweet Dreams,” the easy sliding notes and heartfelt pleading of the first phrase, instantly captured the audience’s attention. “Crazy” and “Faded Love” carry similar emotional impact. Other songs, like “Gotta Lotta Rhythm” and “Blue Moon Of Kentucky” are filled with western swing.

DeGarmo captures the essence of Cline in a truly memorable debut. She has the range to effortlessly match the singer, note for note, though she lacks power on the lowest notes. They were all true, but sometimes hard to hear, and it’s likely she’ll find strength through repetition. Her characterization of Cline feels deeply rooted and personal, and her commitment to interpretation and vocal style is evident from the aforementioned first note. There’s a palpable emotional connection here and DeGarmo is clearly well suited for the role. The resulting performance is a joy to watch and listen to.

The main stage at the Kirkwood Performing Arts Center is large enough to accommodate a big show, while still maintaining the intimacy of a smaller theater. And the sight lines and acoustics are fantastic. Familiar vintage set pieces, designed by James Wolk, make the move to the Kirkwood Performing Center, creating a nice sense of continuity as the company moves to a new home. Sean M. Savoie provides evocative lighting and Brad Musgrove’s costumes reflect the period and the singer’s personal style. Michael Hamilton provides direction and musical staging that mostly keeps the focus on Cline. There were a few moments when it felt like the director deferred too much to Vonder Haar’s antics, but the crowd loves her and the mugging suits the character.

"Always, Patsy Cline," continuing through September 5, is a bit thin on plot, despite the heartwarming friendship. But with memorable, hummable songs and thoroughly entertaining performances by DeGarmo and Vonder Haar, you won’t feel like you’re missing a thing. STAGES St. Louis makes a smart decision by welcoming their dedicated audience back with the familiar and, judging from the enthusiasm of the crowd, much loved production.