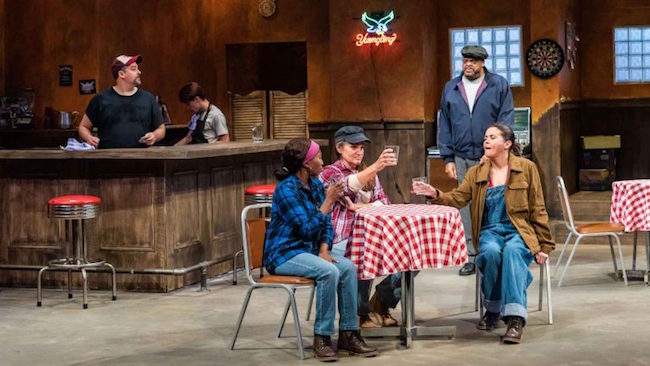 ‘Sweat’ pulls at the fraying threads of a struggling working class

Lynn Nottage’s “Sweat” is a moving exploration of working class America, both the ties that bind and those that are more easily unraveled. The story is personal and affecting, the themes relevant and nearly universal. The Black Rep’s production, directed by Ron Himes, emphasizes the context and meaning of the story, supporting the framing and plot with compelling performances. Though the show is not always easy to watch, it is important contemporary theater that deserves our attention.

Tracey and Cynthia, best friends with sons who are also besties, have worked together at the same manufacturing job for over a quarter century. Both know the machines and their coworkers on the line like the back of their hands. When an opportunity for a promotion throws the two women into competition, the outcome -- Cynthia, who is Black, is promoted over Tracey, who is white -- creates genuine conflict that tears apart their friendship. The tension around the promotion is a harbinger of changes to come, leading to an unexpected and tragic turn of events that impacts everyone they care for, especially sons Jason and Chris.

Director Himes and an exceptional cast bring Nottage’s play to life with powerful, deeply connected portrayals. The complex script questions the sustainability of working class, blue collar America while illustrating how easily these same workers are encouraged to turn against each other. To use distinctions like race, culture or immigration status to encourage workers to fight among themselves and distract them from questioning ownership’s decisions. Though the play spans the decade from 1998 to 2008, the situations mirror labor, immigration and racism issues impacting the U.S. today.

Amy Loui and Velma Austin are well cast as the best friends turned rivals, then adversaries. There’s an authenticity to their friendship that is matched only by the intensity of their falling out. Loui’s slow descent as Tracey, her increasingly racist attitudes and insinuations compounded by addiction, is deceptively fluid. You almost don’t see it coming, though it’s apparent from the opening scene. Austin is a sharp and ambitious Cynthia, but she’s surprisingly naïve. Or perhaps she’s wearing blinders due to her need to both climb the professional ladder and remain one of the "girls" and a regular line worker. She doesn’t realize she’s being set up to take the brunt of the anger for management’s decisions until she’s too committed to her position to change.

The women’s worst traits are almost frighteningly exaggerated in their sons. Franklin Killian is mesmerizing as Jason, Tracey’s son. Her anger amplified, her frustrations turned to impulsive action in his impetuous and seething character. As Cynthia’s son Chris, Brian McKinley is sympathetic and wants to be liked to the point of suppressing his aspirations. He's thwarted by inaction yet when he finally jumps in the results are life-changing, for both men. Though all four characters suffer the consequences of their often misguided and sometimes unintentional actions, the two young men bear the harshest punishment.

The supporting cast is equal in talent and commitment to the four leads. Blake Anthony Edwards is perhaps the most levelheaded and likeable as Stan, the barkeep. His transformation in the final scene is a shocking revelation that punctuates Gregory Almanza’s humanity and compassion as Oscar. Kelly Howe is convincingly over-inebriated as Jessie, a coworker and friend of Tracey and Cynthia. With unremarkable irony, Jessie drowns her personal failings in alcohol but never suffers negative repercussions. Don McClendon and A.C. Smith are both strong in supporting roles, one trying to serve as a guide, the other a striking bad example.

Tim Jones’ set design effectively solves potential staging issues, while lighting and sound cues, designed by John Alexander and Kareem Deanes, respectively, establish the tone, time and mood. The proscenium wings are used for action set in the show’s current year, 2008. This frees the main stage free for the show’s primary location, the local bar where Tracey, Cynthia and Jessie are regular fixtures. The bar’s television is effective at helping the audience follow the story arc, showing relevant news clips that set the year for each scene. The costumes and make-up, by Hali Liles, help define the characters, particularly Killian’s dramatic change in his appearance, reinforcing the central conflicts of the tense drama.

“Sweat,” continuing through September 26th, is not always easy to watch, but your efforts are rewarded with relevant, topical excellence. Realistic, emotionally brutal moments of vitriol and violence -- born out of hopelessness and diminishing opportunity -- are at the very heart of the play. The Black Rep’s production is theater that deserves to be seen by a broad audience. The compelling story and captivating performances are visceral and forceful, holding your attention in ways that may knock you back and make you think.