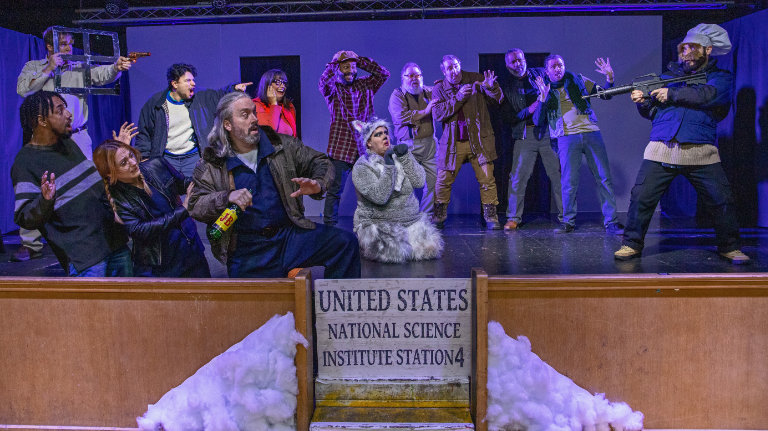 Is your favorite holiday movie “Die Hard”? Do you tend to like less traditional holiday fare? Then the Cherokee Street Theater Co’s current offering may be just the holiday fun you’re looking for. Best of all, there’s a splatter zone for the most daring audience members!

A quick paced, lo-fi parody of the 1982 feature film, “The Thing," this holiday parody is a laugh out funny mash up of pop culture, mischief and the cult favorite flick. The comedy introduces us to a group of American scientists and their crew, stationed in Antarctica during the holiday season. An odd occurrence results in a crew member being accidentally shot by a Norwegian scientist and adds a new dog to their team. The story takes a bizarre twist when some of the crew visit the Norwegian outpost and make a shocking discovery. Can the team work together to save humanity or will their differences wreak extraterrestrial havoc on the world?

The parody, directed with skill and an eye to hilarious excess by Suki Peters, mocks the films cheesiest moments while staying faithful to the story and character intentions. MacReady is drunk, but capable. Childs is smart, but his loyalties elusive. Blair is shifty and resourceful. Garry is trigger-happy. Windows, Clark and Norris are loyal, and easily overtaken. Palmer is cynical. Bennings is over-eager. Fuchs might solve the mystery too quickly, and must be eliminated. Nauls can’t be trusted, but does that make him an alien? The actors play the characters on the very edge of plausibility, with a generous wink and a nod that invites the audience to play along.

If you’re familiar with the film, you’ll find the company stays true to the overall plot points and, in their own fashion, commits to the action and special effects. If you’ve never seen the movie, that’s ok. Knowing the source is secondary to enjoying the high jinks of the moment. The quick moving show is easy to follow and the most important points are humorously emphasized. Multiple times.

Ben Ritchie, Ron Strawbridge, Rachel Bailey, Chuck Brinkley, Ted Drury, Joseph Garner, Payton Gillam, Donald Kidd, Ryan Lawson-Maeske, Rob McLemore, Victor Mendez, Tina Scholl and Nic Tayborn are the cast, stage crew and special effects artists in the comedy. And this version of “The Thing” is a true ensemble show, with each member of the cast getting at least one stand out, laugh filled moment. The cast enthusiastically romps through the story, chewing scenery and engaging in good old-fashioned slapstick comedy while embracing an endearing low-tech approach to theatrics.

With a nod to purposeful simplicity and a trust in the audience’s imagination, the company creates the feeling of a low-budget B-movie in stark contrasts to the big-budget film. A paper propeller on a stick let’s us know that the characters are flying in MacReady’s helicopter. A live interpretation of found videotape gets “rewound” and the actors “appearing in the video” walk and talk backwards, resetting their marks. The video also includes transcription of the Norwegian scientists talking -- placards with a single, repeated word “Bork!” (If you know, you know. And it’s one of the many clever pop references in the production.) Silly string and flying candy are the result of the many explosions, and it’s all played to gleeful excess.

There is, however, one truly impressive piece of stagecraft among all the rudimentary effects. Prop masters and puppet designers Stan Davis and Amy Kelly have created a Thing puppet that’s as grotesque, flexible and surprising as any CGI creature. Even if it’s a bit less realistic. As in the original, this Thing transforms and mutates based on the story’s need. Naturally, there’s a lot of back stage maneuvering, and impressive athletic twists and turns from Lawson-Maeske, Garner and Tayborn, in particular, sell the action. The effect is terrifyingly funny and builds in exaggeration as the show reaches its over-the-top climatic scene.

This show is not for everyone, though I suspect that it will make most anyone laugh out loud and cheer for the plucky crew and their daring do. The Cherokee Street Theatre Co. excels in taking pop-culture phenomena and translating into truly funny live-action parodies. While some may scoff at the lowbrow nature of the shows, they provide laugh-out-loud entertainment for their audiences and are a great gateway company to other theatrical experiences. “The Thing” continues through December 11, with two shows per night on Fridays and Saturdays. Tickets and more information about upcoming shows (including next spring’s long-awaited “Kill Bill” parody) can be found on the company’s website.