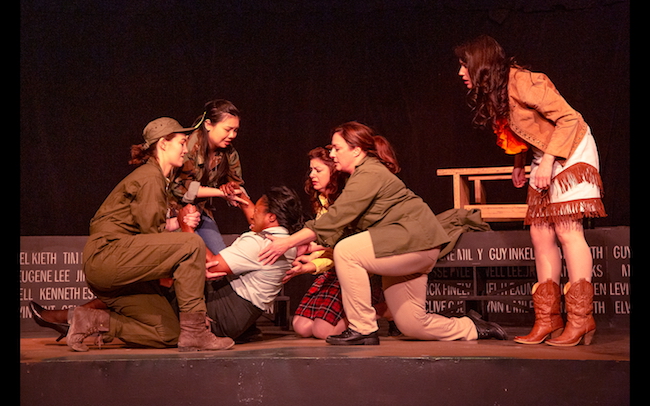 Playwright Shirley Lauro’s “A Piece of My Heart” succeeds in showing us war and its aftermath through a series of interconnected vignettes that resonate with truth. What makes the show even more thoroughly engrossing is that these are the often overlooked, rarely told stories of the women who served our country in Viet Nam.

Thousands of women volunteered in Viet Nam, either through the military or recruitment by supporting organizations. Many of these women made significant sacrifices, including 67 women who made the ultimate sacrifice. Lauro’s play acknowledges these women through six strong, complex and often vulnerable characters. The West End Player’s Guild production brings their stories to life in visceral, heartfelt and emotionally compelling performances. Effectively intense and unsettling, the production is directed with finesse and an expert touch by Dani Mann.

Martha, a sincere and compassionate Mara Bollini, is an Army brat who was certain her upbringing and education prepared her for what she expected would be a glamorous job. Viet Nam was nothing like her mom’s experience as a WW2 nurse. Leeann is filled with fire and conflict, and given a deft touch by Vicky Chen. Leeann’s a half Chinese, half white nurse and former protester who signed up with a promise of being stationed in Hawai’i, where everyone looks like her. She got part of her wish. Sissy, a quiet and thoughtful Madison Jackson, is the third nurse in the show, and she also did not exactly volunteer for her assignment in the all-volunteer Army. She is devoutly religious and finds her faith shaken by the constant trauma of war.

In addition to the nurses, there were many women who were not in the military that volunteered in Viet Nam. MaryJo, a guitar playing, singing Chelsie Johnston, is a USO entertainer and the lead singer of an all-girl band. They’re spending a year entertaining the troops. It only took one night, stuck in the war zone after a show, to shatter her reality. Whitney, properly portrayed by Annalise Webb, is a posh east coast graduate of a woman’s college. Restless and not quite ready to be an M-R-S, she volunteers to be a Red Cross volunteer.

Then there’s the tough vet Steele, played with conviction by Patience Davis. She’s given her life to military service, but she watched her accurate intelligence warning of a seminal battle go unheeded primarily because she is a black woman. Finally, the versatile and sympathetic Shane Signorino plays all of the men in the show.

Plays about war can be incredibly difficult to write and produce. The action, violence and blood of war present technical and emotional difficulties for the cast, crew and audience. Director Mann and the company use lights (Nathan Schroeder, designer), sound (Kareem Deanes, designer), overlapping dialogue and fully committed performances to convey the reality – and the horrors – of being on or near the frontline during war. Both mass causalities and singular events are recreated in ways that grab you, emotionally and sometimes audibly.

And that’s just the first act. The second act finds the women back home, in the states. Each is trying to adjust to their new life while working through the after-effects of their year (or more) of service. Though less outwardly violent, we are given insight into PTSD and the sense of disconnection so many soldiers report. The actors embrace these challenges, displaying range and a contextual connection to their characters that is remarkably moving. The empathy the actors have with their roles translates into authentically driven, emotionally cathartic storytelling. Their work naturally elicits an equally genuine and sympathetic emotional response from the audience. In short, you may want to bring along a tissue or handkerchief.

In the interest of full transparency, I played Martha in a production of this show in the mid-1990s, a few years after the play was first published. The play, script and role are personal favorites. Seeing this captivating production made my heart swell and tears fall. “Sharing” the role with Bollini is an honor.

America’s involvement in the Viet Nam war ended nearly 50 years ago, and yet many of this play’s themes feel relevant and telling in a post-9/11 world. “A Piece of My Heart,” continuing through December 19, is not always easy to watch, and service members and other adults may find some of the scenes triggering. Excellently produced and performed, the show is a moving and impactful drama well worth your emotional investment.