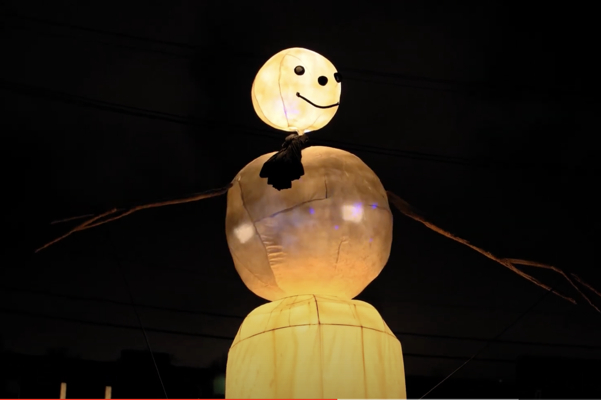 Revamped “The Glowy, Snowy Day” by The Rep and StoneLion Puppet Theatre Delights

For the second year in a row, The Repertory Theatre of St. Louis and Kansas City’s StoneLion Puppet Theatre have collaborated to bring to life Ezra Jack Keats’s beloved picture book, “The Snowy Day.” This year’s version of “The Glowy, Snowy Day” is even more successful than last year’s, and makes me excited about it becoming a free, annual holiday tradition available to all St. Louis.

The improvements to the show come in the form of location, logistics, and artistry. The show was already successful last year, but now it does even more justice to Keats’s 1962 book, one of the first children’s books to star a Black protagonist. The book follows the little boy, Peter, as he spends the day wandering through newly-fallen snow in his neighborhood, goes to sleep, and wakes up to play again the next morning. The book’s joyful illustrations and minimalist text convey Peter’s wonder throughout.

This year, the basic form is the same: the free-admission, socially-distant production has audiences drive through the production looking at puppet installations while listening to a podcast that performs the story. This year, however, the ten-minute production has audiences drive around The History Museum rather than a parking lot of Webster University. This shift in backdrop is fantastic: behind all the puppets are the Beaux-Arts columns of the building. Likewise, the Forest Park location feels more central, and, thus, more for all of St. Louis.

Additionally, the logistics allowed by the History Museum’s large parking lot made for a much more streamlined experience. Having reserved a free ticket in a thirty-minute block, spectators arrived in their cars and Rep employees sorted cars by time into lines in the parking lot. At the designated time, cars were sent forward, guided by traffic officers, and into the performance space.

This year, all the puppets were to the left of the car, just past the curb. This created a clear delineation between audience and performer, and allowed cars to be close to the performers without danger of collision. This improvement allowed for some of my child’s favorite moments in the performance.

My kid loved the show last year at five, and, at six, she loved it just as much. Highlights for her were snow made out of bubbles that she was able to reach out the window and touch, and chatting with the sun puppet before giving him a high five through the window. As we finished the show, she was already bubbling about how she was going to tell all her friends at school that she talked to the sun and slapped its hand.

I reviewed “The Glowy, Snowy Day” last year, and my memory after twelve months is imperfect, but I felt like there were a few more puppets this year, and several of the ones I remembered from last year seemed revised and even more impressive. Particularly, I enjoyed a life-size rod-puppet of Peter that greeted the cars as we entered the performance space, the glowing snowball fight, the extremely animated body-puppet sun, and the toy duck and bubbles in Peter’s bath. Since the show is after dark, all the puppets are illuminated and the colors thoughtful: Peter’s dark skin and red coat show against the pale snow; the multicolored snowballs on rods manipulated by performers in black clothes light up the night; and the sun’s yellow is a bright flash in an otherwise winter landscape.

Finally, in the end human children enact the final image of Peter and a friend playing the next morning surrounded by snow and lit-up puppets. That moment of human actors is a lovely representation, and is an exciting moment of seeing a character from a book come to life, always part of the fun of adaptation.

The 2021 version of “The Glowy, Snow Day” impressed me. I enjoyed seeing how The Rep and StoneLion kept what worked about the initial version, and built upon it. I also love that this performance is free and for everyone in the region. I hope that it becomes a beloved holiday tradition—it already is in our house.

The performance was free and open to the public, and played 5:30-8pm on December 31, January 1, and January 2 at The History Museum, produced by The Repertory Theatre St. Louis and StoneLion Puppet Theatre. For more information on upcoming shows at the Rep: www.repstl.org