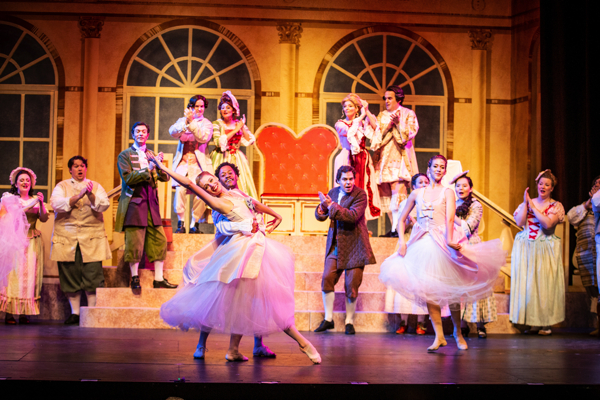 Gina Galati’s marvelous Winter Opera company has mounted a delightful production of Gilbert and Sullivan’s "The Gondoliers." It opened Saturday, January 15, at the new Kirkwood Performing Arts Center to a full and warmly responsive audience.

The story is set in 18th century Venice. Scene designer Scott Loebl gives us a lovely city-scape across the glimmering Grand Canal and a grandiose throne-room in the fictional island kingdom of Barataria. Fine work, as usual for Mr. Loebl.

The evening is filled with Gilbert’s supremely clever ridicule of the class system, romance, and politics. How wonderfully all this applies to our own modern world.

All comic operas end in marriages, right? Well here we have only three marriages (not ten as in "Pirates of Penzance"). And two marriages take place in Act I! A secret one (would you believe?) occurred twenty years ago! But still it’s definitely a comedy.

We open with the usual G&S bevy of maidens (here Italian peasant girls. They give us a gorgeous chorus number, “Roses white and roses red”. All of the girls are in love with two handsome gondoliers—Marco and Giuseppe. They’ve all agreed not to accept any other suitor until Marco and Giuseppe have picked their brides—because they are every girl’s first choice. The lads agree to be blindfolded, and then marry whatever girl they can catch.

But then politics rears its ugly head. The king of Barataria has been assassinated, and the crown prince must be found. He was secreted away into safety as a babe. He is either Giuseppe or Marco—but not even his drunkard foster-father can tell which.

The Grand Inquisitor drafts our two gondoliers into service as joint-king until the Crown Prince’s true identity can be ascertained.

Oh, by the way—that Crown Prince was married as an infant to baby Casilda, the child of now-impoverished Spanish nobility.

That’s our three marriages. So—bigamy? Who’s to be King? (And Queen?) It is proposed that since we have two husbands and three brides, each wife will get 2/3 of a husband. Reasonable. But (with a surprise twist) it all works out.

Marvelous voices abound. They fill the hall, their diction makes the supertitles irrelevant (except in the frequent patter songs). The level of excellence is so uniform that it’s hard to pick favorites, but I must especially commend Tyler Putnam (Grand Inquisitor), Priscilla Salisbury (Casilda) and Angela Christine Smith (the Duchess).

Andrew Pardini and Alexander Scheurmann do splendid work as the two brother gondoliers, as do Holly Janz and Lauren Nash Silberstein as their brides. Gary Moss (a St. Louis favorite) makes the Duke a comic gem, and Clark Sturdevant is excellent (as always) as Luiz (the true Crown Prince). Every supporting role is filled with solid talent: Alexandra Billhartz, Janelle Pierce, Emily Moore are peasant girls, Thomas Taylor, Joel Rogier and Jason Mallory are gondoliers, and Stephanie Mossinghoff is the old nurse who knows the critical secret.

There is a very lively cachucha dance scene, and a stunningly beautiful ballet sequence with dancers from Ballet 314. Here Robert Poe, a founder of the company, shines with crisp energy and infinite precision.