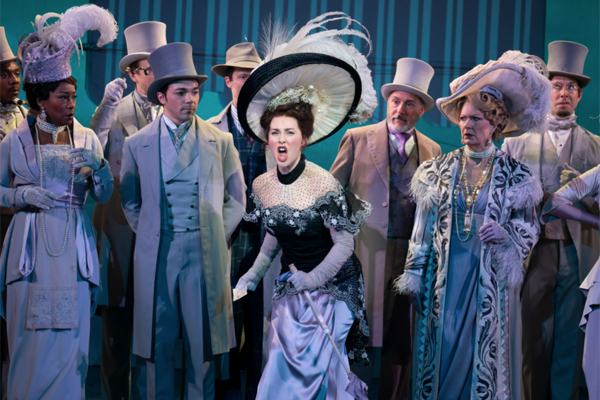 Nearly Loverly: Lerner and Loewe’s “My Fair Lady” at the Fabulous Fox

I’ve heard it said that in Persian rug making, a flaw is always worked into the rug because it would be sacrilege for a mere human to weave perfection. In some ways, that’s how I’m thinking of the current Lincoln Center Theatre production of “My Fair Lady” at the Fabulous Fox Theatre. While it is overall a fine production, there are just enough personal gray areas for me (e.g., the book’s dated and unrelenting misogyny, and the classism underpinnings) to keep it from being my ideal of a perfect stage musical. It’s an excellent “rug.”

“My Fair Lady” began as a 1956 Broadway musical (book and lyrics by Alan Jay Lerner and music by Frederick Loewe) adapted from George Bernard Shaw's play “Pygmalion,” written in 1913. In the main, it’s the story of a lower-class, cockney-speaking “guttersnipe” of a woman, Eliza Doolittle (Shereen Ahmed), who presents an interesting challenge of sorts for two men, Henry Higgins (Laird Mackintosh) and Colonel Pickering (Kevin Pariseau), both experts in the science of phonetics. Using the tool of diction lessons and the application of money, their goal is to transform Eliza into the vocal and physical semblance of an upper-class lady. This original musical featured many now-classic tunes such as “I Could Have Danced All Night,” “On the Street Where You Live,” “The Rain in Spain,” ”I’ve Grown Accustomed to Her Face,” and “Get Me to the Church On Time.”

Now, let me say, unequivocally, the production I saw (Director, Bartlett Sher) was extremely well done. Exemplary singing and acting (Ms. Ahmed clear as a bell, Sam Simahk as a humorous take on Freddy Eynsford-Hill, notable for his “On the Street Where You Live,” and Martin Fisher’s “Get Me to the Church” a standout), impressive sets (Michael Yeargan’s massive three-sided moving and revolving house, and lots of helpful travelling set pieces), Lighting Designer Donald Holder’s perfect spot use of a silhouette lighting technique, outstanding costumes (the Ascot Race scene demands showstoppers, and Costumer Catherine Zuber delivered), lively dance numbers (Choreographer Christopher Gattelli’s Folies Bergère “Get Me to the Church” scene was unexpected, yet entirely worthy of the applause it got), and an expert orchestra (touring and local musicians under the baton of John Bell) underpinning it all. It was just those personal gray areas that took it down a notch for me. But that’s on me; the massive applause from the largely-full and largely-maskless audience (for the first time since the Fox's post-Covid reopening last November) was more than proof that it was well received.