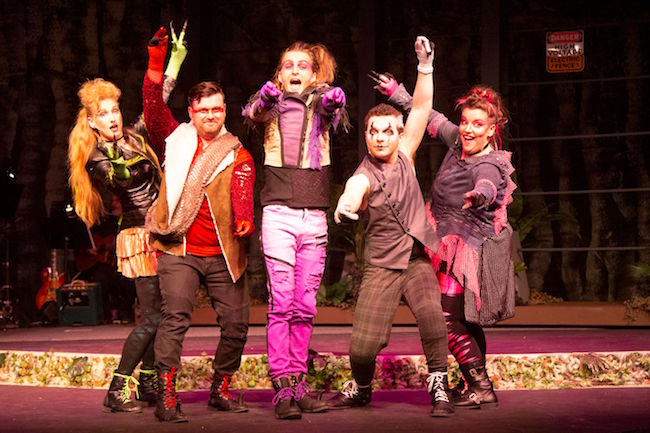 “Triassic Parq the musical,” takes audiences inside a certain dinosaur park of movie fame for a laugh out loud show that pokes at common assumptions about gender and biology. Memorable performances and outstanding comic timing under Justin Been’s direction ensure Stray Dog Theatre’s production is a total hoot.

The upbeat musical, by Marshall Pailet, Bryce Norbert and Steve Wargo, is filled with catchy, hummable tunes and clever, funny dialogue. In a rapid-fire, set-the-scene monologue Morgan Freeman introduces us to the park’s current inhabitants. Mostly velociraptors and T-Rexes, all of whom are currently biologically female, he explains, and were created and hatched in a lab and cannot reproduce.

That is until T-Rex 2 suddenly sprouts a new appendage and newly awakened urges. The Velociraptor of Faith, the dinosaurs’ self-proclaimed leader, immediately banishes T-Rex 2 “for everyone’s protection.” Faith is particularly concerned for the young Velociraptor of Innocence who, it turns out, has a few evolutionary enhancements of her own. In fact, with a nod to biology and a shrug to binary norms, the very natural will to survive is the single message “Triassic Parq” most enthusiastically delivers.

Rachel Bailey is adorably hilarious as T-Rex 2, telegraphing every confusing urge and embarrassing change she’s experiencing to great comic effect. She’s particularly funny in her post appendage “dude” state, the emergent masculine affectations delivered with presumption and a knowing wink. Bailey and Dawn Schmid, as T-Rex 1/Kaitlyn, perfectly capture the cadence, emotional connection, and quirks of teenage BFFs. The depth of their affection and perkiness of their exclamations is one of the surprising charms of the musical.

Tristan Davis is coy and flirtatious as the Velociraptor of Innocence, with an adventurous curiosity born of rebellion and hormonal stirrings. Davis’s young dinosaur is rather precocious and smart mouthed, if seriously naïve and uninformed, a combination that is pure comedy gold. Innocence’s curiosity and perhaps a few other feelings compel her to follow T-Rex 2 beyond the electric fence. Together they seek out the wise, but banished, Velociraptor of Science to see if she can help them figure out what’s happening. And, also, they “bond.”

Laurell Stevenson and Michael Wells match wits and wills as the velociraptors Science and Faith. Wells is pedantic and insistent. The more Faith is challenged and proven wrong, the more humorously stuck in her position she becomes. And Stevenson is simply fantastic as the fast-talking, side-eye casting Morgan Freeman, the first of many funny, irreverent references in the show. Stevenson delivers the perfect mix of dry, deadpan humor and over-the-top commitment to the absurd that the story needs. Bryce Miller rounds out the talented and committed cast as the humorously exasperated Mime-A-Saurus. A reptile of few words, Miller nonetheless contributes significantly with funny pantomimes and strong harmonies, as does the rest of the cast.

The band, led by music director and Pianosauras Leah Schultz and featuring Guitaratops Adam Rugo and Drumadon Joe Winter, is on stage with the actors. There are occasional interactions – particularly with Schultz who stands in as an eager, gullible sidekick. Michael Hodges choreography incorporates stomps and big, lumbering moves that convey a sense of size, which is also nicely emphasized by the occasional amplified roar of our T-Rex friends. Josh Smith uses the full expanse of the Abbey’s stage in the scenic design and it’s lit with the same attention to scale by Tyler Duenow. Eileen Engel’s costumes, mixing leather, combat boots and a slight punk aesthetic with hints of bright, bold color, including a nice touch with the coordinating neon shoelaces, help tie the show together.

Stray Dog Theatre’s fast paced and always funny “Triassic Parq the musical,” continuing through April 30 at the Tower Grove Abbey, uses humor and adaptive biology to teach audiences a lesson or two about genetics, gender and identity. The cast is excellent, with solid comic timing, strong harmonies and a sense of camaraderie that reaches the back of the room. Catchy songs propel the story and themes without being overtly political; and director Been ensures the show is delivered with a light, good-natured touch and an extra dollop of snarky truth. The result is a heartfelt, genuinely funny production that embraces and accepts the dinosaur in everyone, even if we discover we’ve evolved since we were first hatched.