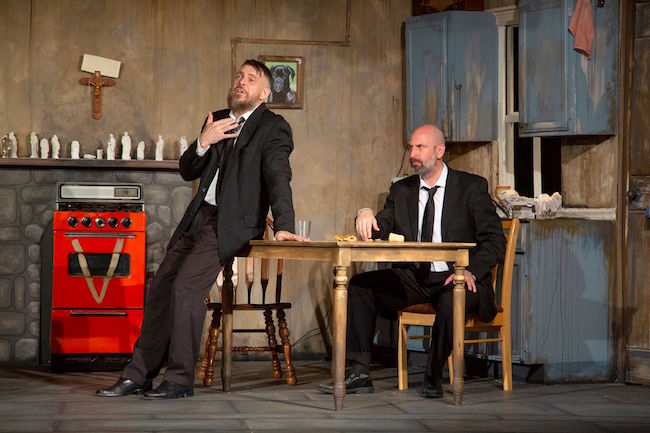 Playwright Martin McDonagh is known for the pointed, dark and frequently macabre sense of humor that permeates his scripts. The West End Players Guild production of McDonagh’s “The Lonesome West” expertly delivers the playwright’s comic sensibilities in a laugh out loud funny and deviously satisfying production.

Coleman and Valene Connor have just buried their father, and the show opens with Coleman and the young Father Welsh sharing a drink at the family’s kitchen table just after the service. Valene soon bursts in, loud and blustery, with new additions for his collection of religious figurines. The priest has taken to drinking a bit more than socially acceptable since arriving in this small community in the farthest reaches of Ireland. The brothers constantly argue and squabble over everything, including who owns the drink poured for the priest, but they come together in their petty criticism of others.

Soon enough, the priest starts questioning his faith and the cause of the senior Connor’s death is revealed to be a bit less accidental than reported. Another suspicious death -- added to the two murders and suicide the town has recently experienced. The priest is beside himself with concern. The brothers fight tooth and nail. Valene claims superiority due to his wealth as owner of the home, but when push comes to shove, Coleman may have the steely nerves and willingness that Valene lacks. The priest tries to reconcile the brothers, believing they will be next to die, at each other’s hands. He simply isn’t a match for the middle-aged bachelors. Let’s be honest here, though he appears more emotionally stable and calm, Coleman may just be a psychopath.

The production embraces the brother’s oddly complimentary contradictions with deft timing and the slightest beats for emphasis, encouraging the laughs. Jason Meyers, as Coleman, and Jeff Kargus, as Valene, turn in some of their best performances yet under the steady direction of Robert Ashton.

With wild mood swings and cutting dialogue, the brothers are deeply troubled and inherently captivating studies. Meyers and Kargus keep the audience wondering who will emerge from each scrap all the while exchanging caustically funny barbs. Taking cues from McDonagh’s carefully plotted script, Ashton ensures the dissonance of outward persona and internal truth present in the brothers is part of the intrigue and the humor. Because this show is hilariously funny, if occasionally troubling.

Ted Drury gives Father Welsh an ever-present hint of sarcasm and doubt that is sympathetic in spite of itself. And he delivers a long, heartfelt monologue (that may benefit from a few judicious edits) without losing our interest in the story. Finally, Hannah Geisz is appropriately sharp-tongued and impulsively girlish as Girleen Kelleher. A school girl who helps her father by delivering and selling Poteen, an Irish moonshine, there are a few comments about her emerging sexuality that are uncomfortable, however Ashton and the cast handle them with a light, almost dismissive touch that generally works.

After a somewhat laborious start, all the elements come together well i "The Lonesome West," which ran at the West End Players Guild through May 8. The highly entertaining show is exemplary of the company's commitment to intimate, character-driven theater that fills the entirety of the small house. The Guild kicks off season 111 with "The American Play," by Richard Greenberg on September 22. The season continues through spring 2023 with "The Christians," by Lucas Hnath, "Outside Mullingar," by John Patrick Shanley, and "Finale," a world premiere by Vladimir Zelevinsky, a physicist and playwright the company has embraced.