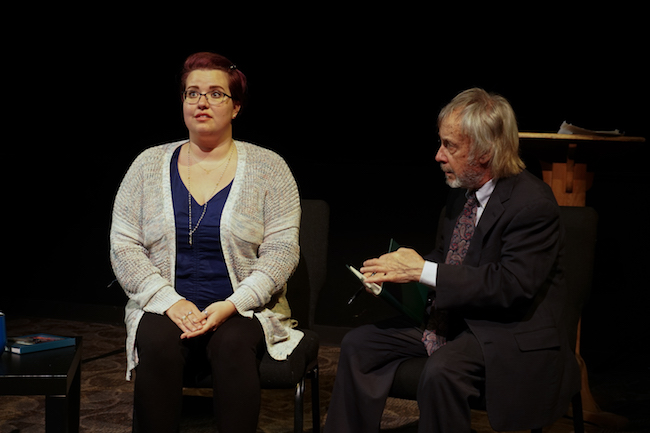 The Midnight Company presents a world premiere of artistic director Joe Hanrahan’s newest play, a haunting, at times discomfiting tale of UFOs and aliens. Or are they simply modern ghosts, as psychologist and researcher James Collins asserts in his opening monologue.

The stage is set up like a lecture hall, with a large video screen and two sets of chairs, each with a small table in between. And Collins is here to discuss his recent work and findings in his studies of unknown, potentially extraterrestrial phenomena and, particularly, alien abduction. Collins explains that he will be sharing interviews with two subjects, Virginia and Scott, both of whom now believe they were visited and then abducted by aliens. The remainder of the play is a series of conversations and hypnosis conducted by Collins on the two subjects.

Hanrahan, as Collins, is his usual informatively loquacious self, and this character has a lot to say. It’s clear the playwright has a deep connection to the material and Hanrahan imbues the scientist with a heavy dose of childlike enthusiasm that’s present even in long recitations of evidence and facts. Payton Gillam and Joseph Garner are exceptionally expressive and emotionally varied in their characterizations of Virginia and Scott, the abductees. Each transitions effortlessly from casual chatter to skeptical curiosity and intimate descriptions of their interactions with the aliens and then back to friendly, unaffected normalcy.

Director Morgan Maul-Smith shows a sure hand guiding the transitions and ensuring that some of the under-hypnosis scenes don’t become too graphic. There’s a fine line here and the script’s focus on ideas about breeding and interspecies sex makes the line and challenge all the more apparent. From a plot standpoint, the storyline became a bit much, and the details lost their specificity in favor of unfinished, though lofty, ponderence. Although the script may have erred on the side of too much information, the characterizations Maul-Smith drew from all three performers were grounded in reality, helping to keep the subject in check.

Kevin Bowmen’s production design created the space, Ellie Schwetye’s sound design helped tie the elements together while providing familiar audio cues that reminded us this was a story about aliens and ghosts. Tony Anselmo’s lighting design didn’t bring the house lights fully down until Hanrahan’s character transitioned from his open statement to the interviews, an excellent job of drawing the audiences into the story.

The production feels a bit like the set for an episode of 60-minutes, the long-running news journalism weekly, which lends atmosphere and authenticity to the play. The problem with that approach is that this show runs 80 to 90 minutes and it’s really tough to keep audiences fully engaged in the story without significant action or some sort of catalyst to change. Additionally, the show's conclusion seemed to suggest a deeper point to the script, one about love and, perhaps curiosity. However, after the almost gratuitous exploration of interspecies breeding, and with a lack of a firm resolution for any of the characters, the point feels superfluous rather than poignant. There’s simply too much telling and not enough showing at its current length.

Though a bit too long, ‘Anomalous Experience,’ continuing through May 22, is interesting and entertaining. Director Maul-Smith elicits solid, realistic performances from the cast and maintains audience interest with well-intended direction. Judicious editing and a shorter run time may improve the experience for audiences as well.