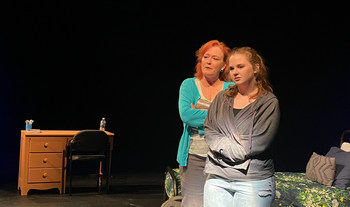 After a pandemic delay, Tesseract Theatre Company returns to the stage with their 2022 Summer New Play Series. Taylor Gruenloh’s “The Length of a Pop Song” is a brutally realistic, and often painfully resonant, look at a young woman facing her most important choice. Does she want to die or live and fight a system, a world, that feels designed to use her body and crush her soul?

Lex long ago recognized the world’s blunt cruelty, frequent hypocrisy and fundamental disinterest in her well being. Equipped with that knowledge, her intelligence, attractiveness and talent are not enough to protect her from depression, addiction and abuse. After another incident of self-harm, she’s returned home to either begin healing or complete a suicide attempt and leave her mom to deal with the aftermath.

A uniformly strong cast is anchored by the best work I’ve seen Rhiannon Skye Creighton turn in to date. She finds multiple levels in her character and, most importantly, her pain feels personally connected to her anger and her depression the gateway to addiction. Creighton will likely continue to connect with the nuances of her character; she’s already convincingly authentic and motivated.

It’s a joy to see Kelvin Urday, as Lex’s best friend Oliver, in another role where his natural compassion and optimism enhances his portrayal. The always-compelling Donna Parrone rounds out the cast as Lex’s concerned mother. She balances hope and concern with a palpable sense of helplessness in a way that’s effectively realistic and touching. Director Karen Pierce capably guides the emotional ebb and flow of the show, although the blocking is a bit static, with some character placement and movements feeling spurious rather than grounded in the script.

Lex’s story, as well as her mom’s, comes spilling out in conversations and flashbacks to conversations and memories from the past. There’s an essential relativity to the two women’s experiences, and Gruenloh’s thoughtful inclusion of the mom’s history as a secondary thread is smart and compelling. Though you may not immediately realize the first flashback, the device is mostly effectively used in this script. From a production standpoint, a significant lighting change or costuming variation may help the audience more readily recognize the time shift.

The idea of “sad girl” songs, capturing the spectrum of women singer songwriters’ explorations of rights, emotions, abuse and gender privilege, forms a compelling undercurrent of the show. Early on we learn that Lex herself is an aspiring songwriter deeply influenced by Kate Bush, Joni Mitchell and other sad girls with a more independent and rebellious streak. Her preferences add to the complexity and texture of a story that reveals much about the character’s trauma and potential for recovery. During the final scene, the show introduces an original sad girl song by Gruenloh and Gracie Sartin, performed by Creighton’s character, that provides a fitting, cathartic coda to the beautifully structured, sometimes painfully authentic play.

The script is complex and densely layered, with hints of hope peeking from behind mountains of despair. As Lex’s mother, Parrone strips herself bare in an effort to protect and connect with her child. Urday’s Oliver is willing to go to great lengths, even crawling through Lex’s bedroom window, to try to inspire hope. And Creighton shows us vulnerability and longing that counters the raw anger, self-doubt and its persistent gnawing.

Brittanie Gunn’s set design, Kevin Bowman’s lighting design and Gruenloh’s sound design minimally but effectively place the show in context, keeping the focus on the hard-hitting script and moving performances. The elements come together in an understated way that reinforces the bittersweet brilliance of Gruenloh’s intensely personal, yet broadly relatable and effective script.

While not always easy to watch, “The Length of a Pop Song,” continuing through July 17, is a captivating, insightful and lovingly structured exploration of dark, often intrusive truths. The theme and raw honesty inherent in Gruenloh’s script may be triggering for some, particularly those whose lives have been impacted by suicide or suicidal ideation. If you or someone you know is experiencing emotional distress or considering self-harm, the National Suicide Hotline is now available by dialing 988. Locally, you can find a variety of people-centered resources at Start Here StL.

Outstanding performances filled with conflicting emotion and realistically humorous touches elevate the deeply personal and effective play, expertly guiding audiences from hard truths to hopeful futures. Gruenloh’s “The Length of a Pop Song” runs during the first two weekends of the festival. The final two weekends of the festival, July 22 through July 31, feature JM Chambers’ new play “All That Remains.”