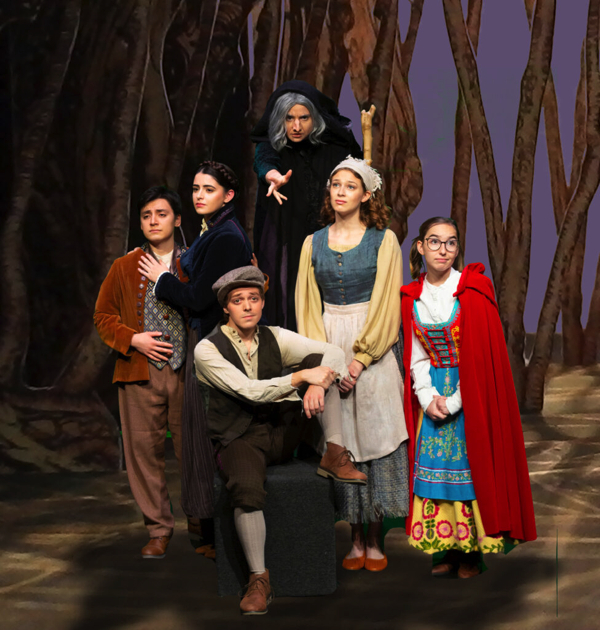 Head 'Into The Woods' at Washington University!

Stephen Sondheim’s fascinating fairy tale deconstruction “Into The Woods” debuted at the Old Globe Theatre in San Diego in 1986 and premiered on Broadway in 1987 winning three Tony awards: Best Score, Best Book, and Best Actress in a Musical for Joanna Gleason. The plot intermingles various fairy tales including “Jack and The Beanstalk”, “Cinderella”, “Little Red Riding Hood” and “Rapunzel”. By the end of Act I all is as it should be and we have arrived at happily ever after. But then comes Act II and real life questions come up. Not everything is as simple as it seems in a fairy tale and that is what Sondheim and book writer James Lapine present to us in this timeless Broadway classic.

Washington University’s Performing Arts’ Department production of “Into The Woods” is a fine rendition of this dark adult fairy tale. Navigating Sondheim lyrics can be a daunting task even for musical theatre veterans but the student cast of 17 (20 including the three magical puppetry dancers) tackle each syllable like pros across the board. There were some lovely connections in duets most notable the two Princes (Martin Ibarra and Ande Harte) in their “Agony” numbers, the Baker and Mysterious Man (Alexander Hewlett and Dylan McKenna) in “No More”, and the Baker and Cinderella (Alexander Hewlett and Nina Silverstein) in “No One Is Alone”. Stand out solo performances were Isabel Koleno as the Baker’s Wife and Eli Bradley as Jack. Ms. Koleno brings humor and heart to the role as well as pitch perfect singing. Mr. Bradley’s Jack is endearing and cheeky, two very important qualities to have in a giant slayer. All in all an excellent ensemble and a production worth seeing.