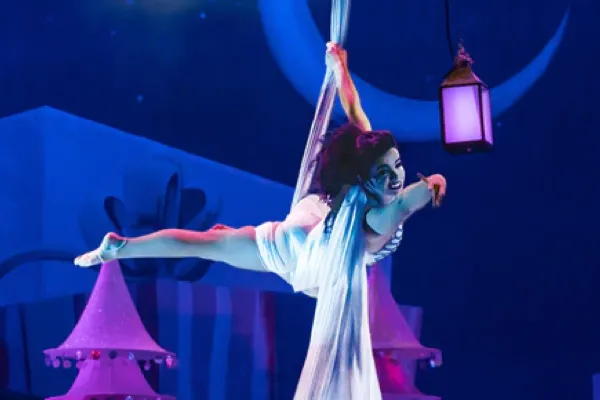 My research tells me the Cirque Dreams franchise is “critically acclaimed for imagining, creating and producing whimsical theatrical spectacles of traditional European circus arts infused with American contemporary circus wrapped in Broadway-style musical.” But to be perfectly honest, I had no idea what I was in for Friday night at the Fabulous Fox when we took our seats for “Cirque Dreams Holidaze”. I hoped maybe it would be part Radio City Music Hall Rockettes’ “Christmas Spectacular” and part Cirque du Soleil?

Of course the Fabulous Fox theatre did not disappoint in the holiday decorations department. Any “bah hum bug” feelings that walked in the door were immediately dashed by the glorious lights, wreaths, and beautifully ornamented trees wherever one gazed. Once the house opened and we were able to take our seats we were treated to a somewhat sparse stage of four green tinsel Christmas trees (sans ornaments) at the sides of the stage and a lone lit signpost center stage with directions to seemingly random places like “Loststen” and “Torn Arund”. A few minutes before curtain time various characters appeared on stage to examine the sign and change the direction multiple times all the while waving to the crowd, enchanted by all of us, but not nearly as enchanted as we were by them. And thus the fairy tale evening began.

There wasn’t really a plot to speak of. First, we were introduced to the only characters who actually spoke to the audience and they were the vocalists known as Kris and Kristy. They told us they had travelled to the North Pole, a truly magical place. Kris and Kristy intermittently came on stage to provide introductions to some of the acts and sing variations on traditional Christmas songs. The sound on their mics was not quite right the evening we saw them, unfortunately distorting their vocals.

But the sixteen acts themselves… I don’t have enough superlatives to cover all of the emotions I experienced in watching these amazing artists. There were every type of circus act you can think of in the 90 minute show. And each performer was stellar.  But I will tell you my favorite ones. The child in me absolutely loved the acro skipping which is basically the most fantastic jump roping you will ever see in your life. But these weren’t just any jump ropers, these were jump roping reindeer! The choreography was incredible and I truly believe these dancers must have springs built into their feet. My jaw hurt from smiling and laughing during their act, it was that much fun.

The “cyr wheel” act was also a delight for me. Balancing on a giant hula hoop, this acrobat defied gravity inside the hoop as it twirled around the stage. He was mesmerizing with every turn, flip, and spectacular swirl. At times the hoop was spinning inches above the floor with him inside it and he managed to stay inside the hoop and off the floor, astounding!

After intermission the show opened with the perfect clown. He led five selected audience members in a hand bell choir. Without saying a word, he had the packed theatre in the palm of his hand laughing throughout. A special shout out to the five unsuspecting audience members who played along and seemed to have a lot of fun with it. This clown was so enchanting and delightful he made me believe that the clearly embellished hand bell finish to the carol was made up solely of the five members he had just trained.

The evening was full of death defying aerial acts of the hammock, hoop, pole, trapeze, rope, and duo strap variety. All of which were magnificent. Equally stupendous were the non-aerial acrobats including the acrobalance posture team, the banquine trio, the hand balance solo performer, the Russian barre trio and the fantastic juggler.

All in all it was an evening of magic and miracles. “Cirque Dreams Holidaze” played at the Fabulous Fox December 16 and 17. For more information go to www.cirquedreams.com.