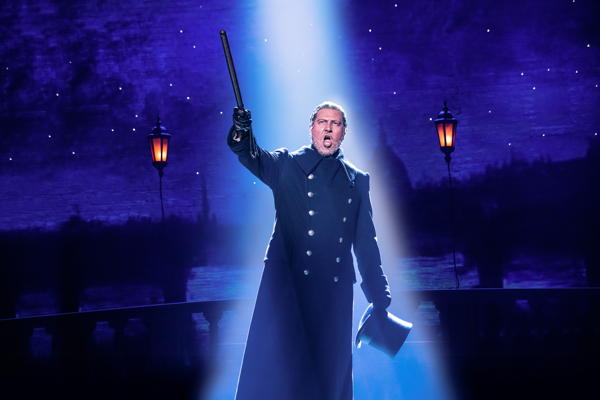 'Les Misérables' At The Fabulous Fox Is Stunning!

Since 1985, the Claude-Michel Schönberg and Alain Boublil musical “Les Misérables”, based on Victor Hugo’s 1862 novel of the same name, has had tremendous worldwide success. In 1987 it won eight of the 12 Tony awards it was nominated for. There have been tours upon tours and numerous revivals. I have seen the production multiple times including the original London production and, if I’m being completely honest, I might have been a bit jaded walking into the Fabulous Fox Tuesday evening for the opening night of the very limited run of this particular tour. But this show is not only worth the price of a ticket, it could even be worth following around like a teenager would a rock band on summer break.

The first lovely discovery was the backdrop of the set which was a Victor Hugo painting. The program stated that the set and image designer Matt Kinley was inspired by the paintings of Victor Hugo and the backdrop even had the artist’s signature which I thought was a beautiful touch. I did find the lighting a bit dark some of the time which added great contrast to the brighter scenes, but there are not a lot of bright scenes in the show. I was not immediately impressed with the traditional hero of the story, Jean Valjean, played by Nick Cartell (stay tuned, more on Mr. Cartell later). The character of Javert, the ever-present police inspector, played by Preston Truman Boyd, had always come across as one dimensional to me in prior productions. However, in Tuesday night’s performance Mr. Boyd brought such depth and nuance to the role it actually took my breath away. I was equally moved by the sincerity and heart of Randy Jeter’s performance as the Bishop of Digne. Actors Haley Dortch, who played Fantine, and Christine Heesun Hwang, who played Eponine, both told their stories beautifully in their solos “I Dreamed A Dream” and “On My Own” respectively. Not only were their voices flawless but the emotions they brought to the songs were simply magnificent. The most moving moment of the night for me was Nick Cartell’s rendition of Jean Valjean singing “Bring Him Home”. This song is a prayer to God pleading to keep Marius safe and Mr. Cartell brought his heart and soul to every note. This scene made up for any lackluster prior to this moment in my book. Additionally, the sounds emanating from the full orchestra provided wonderful compliment to the singing talents of this huge cast.

On the less than perfect end of the spectrum, both my guest and I thought the first act seemed rushed. I found it very difficult to hear Gavroche, played in this performance by Gabriel Lafazan, and missed the bulk of his lines. Madame and Monsieur Thenardier (usually two of my favorite characters), played by Christina Rose Hall and Matt Crowle, each had a guttural growl I assumed was a deliberate choice. At first, I found it amusing but after a while I found it annoying and finally irritating. In this particular production I found these characters meaner than usual and that lessened the comic relief. That may have been intentional on the part of the directors, but I found it somewhat off putting. Finally, I missed seeing the supertitles of the years in prior productions letting us know the passage of time. Having seen the production multiple times, I didn’t need them but I think someone less familiar with the story might have used the help.

In the end I was moved to tears more than once. If you’ve never seen “Les Misérables” before, this is the one to see, and if you have seen it before, this one will make you fall in love all over again.  “Les Misérables” is a beautiful story and this rendering playing at the Fabulous Fox through January 22nd is absolutely stunning. For more information: www.fabulousfox.com.