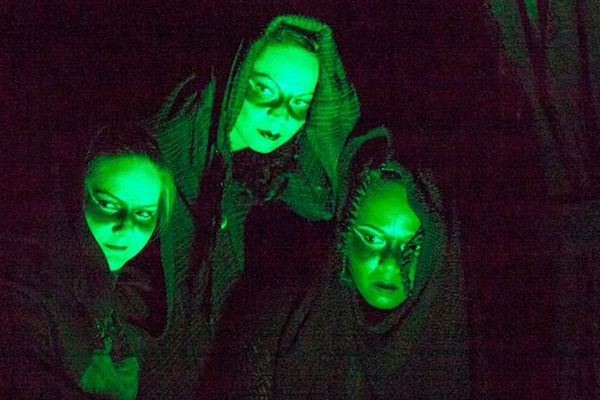 St. Louis Shakespeare Company gives one of the Bard's most well-known and oft performed tragedies, Macbeth, the story of the notorious Scotsman and his ambitious wife, a spooky retelling appropriate for the Halloween season. Acclaimed as a noble and courageous soldier and trusted consort to the king, Macbeth and his friend Banquo have a seemingly chance encounter with three witches that changes the course of their history.

The slithering, enticing witches lure the men with tales of personal glory and success. When Macbeth relates these events to his wife, she pushes him to take action rather than waiting for the prophecy to unfold. The laws of nature insist that every action have a reaction, and this is where the tale turns dark and murderous, splitting Scotland's loyalties and leading to war.

< p>Shakespeare's play is a brutal, bloody tale that warns against over-reaching. The company pushes this idea into a battle between man and nature, where the witches are both agents of mischief and misdeeds and a representation of nature's rebellion against man's attempted domination. It's an ambitious approach, but in the Halloween season, with a contentious political cauldron of our own, the interpretation really works.

As the titular Scotsman, Ben Ritchie shows his preference for restraint and underplay, but here he allows himself to become a vessel for the influence of malice, turning increasingly erratic and explosive by the second act. He embraces the narcotic pull of power with the affliction of clarity. As Lady Macbeth, Michelle Hand is in consort with the witches, mirroring their incantations and movements, but becoming disjointed and frenetic. Hand is captivating and persuasive, whether she's pushing her husband to action or fervently washing her hands.

The story itself seems preternaturally controlled by the witches, Elizabeth Knocke, Taleesha Caturah, and Katie Robinson, who manipulate and propel the suspense. Their incantations have a good meter, and the textures in their voice are effectively weird, but it is unfortunate that there are times when it's difficult to hear them, perhaps due to the placement and levels of the speakers.

Maxwell Knocke's Banquo is relentlessly unforgiving, and his slow burn when he realizes Macbeth is turning against him is distinct and memorable. Duncan, played by a stoic and loyal Eric Lindsey, flees for his safety, and it is Maggie Wininger's impassioned, determined Macduff who must rise and lead the battle to reunite the torn country. Alex Bollini, Wendy Farmer, and Michael Pierce stand out among the supporting cast, as do the young Macduff children: Dylan James, Riley James, and Morgan Murphy.

The set and lighting design by Chuck Wining and Nathan Schroeder frame the show well, while enhancing the sense of disparity and conflict. Emphasizing director Suki Peter's stylized vision, they provide a suspenseful tone and an environment at war -- the tree overgrown with moss and fungus, the gateways burnished with patina after years in the wind, rain, snow, and hot sun. Eric Kuhn's fight direction is crisp and purposeful, and generally takes advantage of the set and staging; it is best shown in the one-on-one battles.

JC Krajicek's costumes distinguish the real, Scottish world from the underworld, though I would have like to see the punk-influenced style and make-up pushed even further. Unfortunately, the sound was not as well planned or executed. It was often distractingly loud, overpowering character dialogue, particularly when delivered from upstage.

While compelling and generally well delivered, the production is not without other unfortunate flaws. The worst of these are issues of consistency and commitment. The pacing is generally uneven, and too languid in the first act, and at times the actors lose their focus and posture. Vocal command, measure, posture, and even the sharpness of execution are important to sustaining drama from curtain to final bow, and will serve the company well. The stakes are high in the story and tension -- constant and building -- seems key to a successful retelling.

There are a number of truly engrossing scenes: Macbeth's reaction when he sees the ghost at dinner. Banquo's impenetrable stare. The murder of Macduff's wife and children, and the range of emotions Macduff expresses on learning of their demise and avenging their deaths. Lady Macbeth's crazed pacing and hand washing. The well-executed final fight choreography between Macbeth and Macduff. All the while, the witches appear and disappear Cheshire cat-like, casting spells and setting tragedy in motion. If the company can tighten and infuse the periods in between the moments with tension, the show will be even more effective and memorable.

While imperfect, St. Louis Shakespeare's production of Macbeth, running through October 16, 2016 is a wicked good time. The darkly imagined show gives the Scottish play an extra dose of the macabre that entertains while providing a new point-of-view through which we can imagine this moving tragedy.