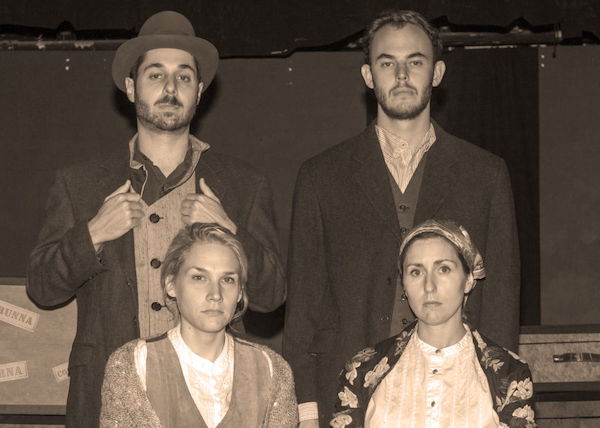 In Manifest/Destiny, the West End Players Guild delivers a loving portrait of the European immigrant in the United States. Spanning hundreds of years, from the earliest settlements until World War II (or thereabout), the play captures a vast movement with individually distinct stories. Though they left their homelands for many different reasons, they were all seeking a fresh start and better opportunity.

Playwright Vladimir Zelevinsky has constructed a fast moving script that simultaneously touches on multiple stories, which are cleverly presented by the company's four-actor ensemble in two distinct but connected acts. Though the show is narrowly focused on the historic European experience, it successfully conveys the ideals and aspirations of so many who choose to resettle in this country.

Manifest, the first act of the show, tells how immigrants often struggled before reaching American shores. The act skillfully moves from homeland to ship to Ellis Island and the edges of the country, providing glimpses of desperation and fear as well as joy, strength, and the will to survive. The second act, Destiny, follows the immigrant movement west, across the planes and through mountain passes to the Pacific Ocean. The motivations and longings are the same, but new challenges are faced, adding to whatever burdens they already carry.

There seem to be 100 different characters in the show, making it at times confusing to follow the story lines. Director Steve Callahan finds strong threads --personalities, backgrounds, and motivations -- that reinforce the theme and guide the actors. The story-centric focus helps the audience to slide through the imaginative overlapping of eras as effortlessly as ensemble. Jeremy Goldmeier, Emily Johnson, Ariel Roukaerts, and Zach Venturella, artfully represent Pilgrims and Jews persecuted for their religious beliefs, Europeans from all points fleeing famine and war, and young lovers and risk-takers looking to make their mark on the world.

A number of scenes stand out, including Venturella and Johnson as a young couple ecstatic with the discovery of their love and looking to build a life together. Goldmeier is warmly reflective as a Jew fleeing the pogroms, and Roukaerts is poignant and sympathetic as a confused immigrant who doesn't quite grasp the subtleties of English. Later, Goldmeier and Johnson provoke tears as a couple facing a heartbreaking decision just when they thought they'd arrived, Venturella embodies the good and bad of rugged individualism, and Roukaerts shows the true spirit of the pioneer as a woman seeking justice.

The sparse set and limited use of props, as well as the attention to dialect, aid the story for the most part. There are a few muddy scenes that may be improved by the addition of a more specific costume piece or prop, although more direct lighting may also solve the confusion. Additionally, it would serve the story better if all props were either on the stage or gathered by an actor during a brief exit. I found myself pulled out of the story a few times by obvious prop and costume piece handoffs from stagehands.

Zelevinsky's script, with its plethora of characters experiencing similar journeys across time, doesn't aid the staging in the respect. Callahan is a sharp director and experienced actor, enhancing his approach to the script. He gives the actors freedom to delve into their characters, but he should push for even more specificity and distinction. For the most part, however, the storytelling works spectacularly well and the performances are captivating and genuine.

Almost everyone who lives in the United States today arrived as immigrants. Perhaps not your generation or your parents or grandparents, but as a nation we are comprised of waves of immigrants. Zelevinsky creates a fluid history using a common experience repeated generation after generation. The show doesn't avoid the heartbreak or disappointment many faced, but still maintains an optimistic tone.

In the service of transparency, this reviewer feels compelled to mention that I was part of a committee that recommended this script to the company, however I had no part in the casting or production of the show.

Manifest/Destiny, running through November 13, 2016 at West End Players Guild, in the Union Avenue Christian Church, is a delightful homage to the resiliency of spirit. Zelevinsky's story presents the experience with dialogue and emotion that resonates. Director Callahan and the talented ensemble fill the characters with vibrant energy and determination, adding buoyancy to a production that's authentically uplifting. Considering the importance of immigration in our political and cultural dialogue, the show is as relevant as it is enjoyable.