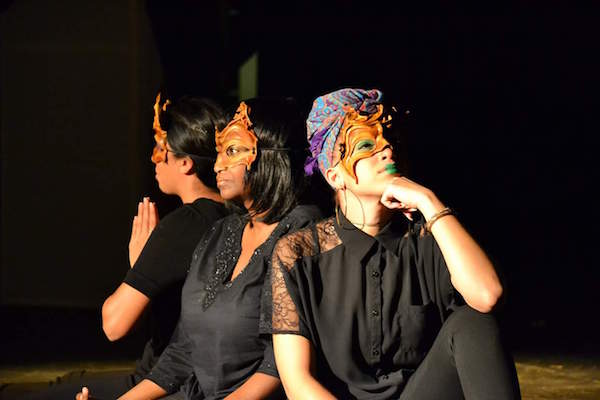 One of the most enjoyable aspects of a vibrant performing arts community is the opportunity for patrons to witness art in all stages of its creation. Touring shows at the Fox have usually been through years of development, refinement, and polish by the time they pull into town. In St. Louis, we are fortunate to have several companies that include a slate of original, one-act plays, and one company devoted to producing and promoting local talent. These companies offer us a unique theatrical experience: to be among the first to see a new work.

First Run Theatre shows feature only the work of playwrights from the metropolitan region, and the company collaborates with a number of organizations to solicit new pieces on a recurring basis. The eight original plays presented in the two-act Spectrum 2016 short play festival are all receiving their first full production. The plays run ten to twelve minutes in length and, while several feel more like a well-constructed scene, each presents a complete idea or story.

The acting and directing is crisp, for the most part, although a lack of experience was noted in a few actors who labored and could literally be seen looking for their lines on the ceiling. It has honestly been quite some time since this reviewer noticed those revealing glances, but it is distracting and signals a lack of confidence. Perhaps some extra line rehearsal with the directors can help shore them up by next weekend. Additionally, the pacing and emotional ebb and tide of the short plays appears to click best when the cast is limited and the script narrowly focused and sharply written.

Most Real and The Technicians are the most successful of the shows for me, followed closely by Pride of Dummies. The subjects of these plays are clear, interesting, and relevant. Though Most Real feels like an important scene in a larger piece, the play resonates as contemporary and realistic, with two intriguing characters I want to watch. The Technicians is abundantly humorous, cleverly positing a much deeper philosophical question. It feels complete as a short play and would likely lose significant charm if lengthened. Pride of Dummies would benefit from a less obvious and judgmental title. The sarcasm and bickering among the three "frenemy" characters perfectly delivers the lesson in a complete piece with delightfully snide dialogue.

Fear of Mediocrity is a good piece that may work better -- and linger more powerfully -- if tightened and presented as spoken word. There are times when lead actor Woolbright finds a defined cadence and the energy and interpretation immediately improves. Following this directional lead and eliminating the chorus may create a new, stronger work. Finally, And They Lived Happily Ever After, Placebo Effect, Reunion, and Fartocalypse were quite enjoyable and laugh out loud funny by several turns. Still, those pieces feel like sketch comedy rather than a play. Additionally, I have seen these stories presented before, although Fartocalypse builds with an inventive, hilarious story that's a surprising take on environmental disaster. The sketch is a perfect choice to end the evening.

Playwrights David Hawley, Joe Wegescheide, R. O. Stevenson, Nathan Hinds, Dan Viggers, and Colin McLaughlin demonstrate that they have a firm grip on the art of structuring a play, but some work is needed. Attention to rewrites to remove the clichéd and expected will serve the authors well. The good news is that each story has an interesting perspective and some good detail to hold audience interest, so there isn't a bad start among the selected pieces. The set and technical aspects are purposefully minimal, but the direction and acting are, for the most part, successful in bringing these new works to life.

First Run Theatre and the local artists involved in their productions offer a unique opportunity to see live theater in its nascent form, to be among the first to be moved by a new work. Or not. Not every show will hit all your buttons, but there's plenty to like. Theatergoers who enjoy a deeper dig into the art and craft of storytelling are sure to find a lot to discuss after seeing Spectrum 2016, a short play festival running through November 20, 2016.