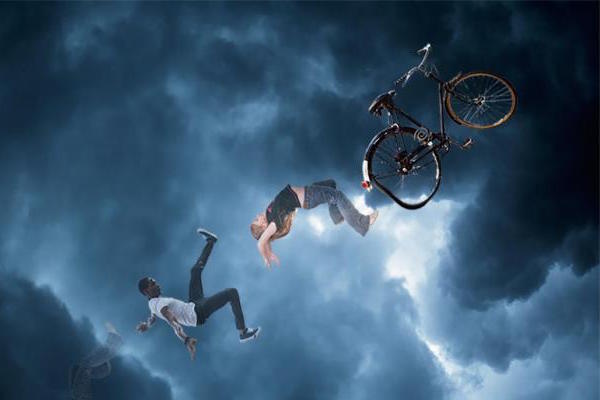 The Year of the Bicycle, now playing at the Upstream Theater, is simply a masterpiece! It's by a young South African playwright, Joanna Evans, and it is a brilliant piece of writing.  In Upstream's production it is blessed with two equally brilliant performers: Magan Wiles and Eric J. Connors.

It's a small piece, an hour and a quarter or so, but so filled with beauty! It is set in post-apartheid South Africa, and in a lovely, fragmented dream-like manner it follows the friendship of two children--a girl, Amelia, white and affluent; and a boy, Andile, poor and black.

The set is simplicity itself. The play is done in the round, and we see just a rectangular floor with a wispy cloud-scape on it. Taut floor-to-ceiling wires, perhaps a dozen, delimit the playing space.  In the center is a double-decker wheeled wooden cart that serves as a gurney, a gate, a dog-house, an airplane. Beyond that there is nothing but a ball of red yarn, a rag-and-string doll, a blanket and a few bicycle parts--a wheel, a seat, handle-bars. Yet with just this a world is created, a childhood springs to life.

We begin in silence -- except for the occasional ominous electronic beep of a hospital monitor. Amelia and Andile lie, top and bottom, on the gurney. Each is comatose; each has suffered a concussion. Amelia was injured in a wild and reckless bicycle ride. The circumstances of Andile's injury we find out only much later. Gradually we enter their shared coma dreams. They dream of -- and long for -- their past.

Throughout the performance the dream is supported by a wonderfully evocative soundscape created by David A. N. Jackson. He sits at the far side of the theater amidst a curious array of instruments and other objects from which he draws exquisitely appropriate sounds--gentle tones, the whir of a bicycle wheel, soft brushes, and--recurring every so often when we have almost forgotten it -- the beep of the hospital monitor. It reminds us of the mortal peril in which these two young people lie.

When they are only eight Andile follows his soccer ball into Amelia's yard. She is an odd, lonely imaginative girl who dreams of flying like Amelia Earhart. Andile too is alone. The two are drawn together.  Wiles and Conners are utterly convincing as children as they play and imagine and quarrel and reconcile. They ride her new bike, they fly an imaginary airplane, they play a little soccer. Wiles very convincingly portrays Amelia's yappy little dog, Pilot, of whom Andile is a little afraid. The script is so deeply perceptive and true to childhood's insecurities and needs and flights of fancy.

At one point they decide they need a little brother, so Andile makes one out of scraps of cloth and string. This doll becomes a friend--and a point of contention between them. Which of them gets to keep this beloved little brother overnight? Perhaps they could employ Solomon's solution: they could cut the doll in half.

From time to time as the story progresses one or the other of the children strings red yarn from a ball up and down, around and among the wires at the edges of the playing area--then in and around the cart in the center.  Is this an emblem of the tightening bond between these friends? Does it hint at the zig-zag line of a hospital vital-signs chart?

I've watched the stunning talent of Magan Wiles since her under-graduate days at SLU thirteen years ago. She's always impressive, deeply focused, physically agile. Her face can be the very image of yearning. I was sorry to see her leave us for Los Angeles, but am so glad she's able to return occasionally. In The Year of the Bicycle she's at her very best.

Michael Heil, who has done many fine sets for Upstream, in this case works as a minimalist, but there is nevertheless beauty here. Scenic artist Cameron Tesson contributes greatly to this beauty.

Laura Hanson's costumes seem so simple, yet they meet the conflicting demands of the play perfectly. How can one costume serve both in backyard play and on a hospital gurney? And from ages eight to eighteen? Ms. Hanson solves this problem quite deftly.

Tony Anselmo's lighting perfectly supports the ebbs and flows of this drifting piece. And Philip Boehm's direction is masterful.

After their earnest but misguided venture into Tennessee Williams I am glad to see Upstream re-embracing their valuable mission with works like last fall's Suspended and now this truly memorable production of The Year of the Bicycle.

This U.S. premiere is a perfect production of a beautiful and poetic play.  It's the best theater I've seen in quite some time. The Year of the Bicycle continues through February 12 at the Kranzberg.