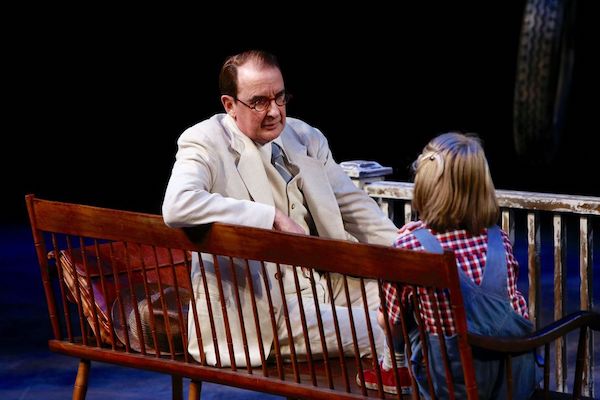 The Repertory Theatre of St. Louis' production of To Kill A Mockingbird is vibrant and engrossing, serving both the story and the times, past and current. Packed with an eloquent but forceful message on equality, dignity, and respect, the show is a memory play that feels at home in contemporary America. Harper Lee's seminal story on race and justice, adapted for the stage by Christopher Sergel, has not lost any relevance or impact since its original publication.

Now a grown woman and long since moved away from her hometown of Maycomb, Alabama, Jean Louise Finch, known as Scout in her younger days, revisits her upbringing in a mostly segregated but intertwined southern town. Her father Atticus, the local barrister, has taken on the defense of Tom Robinson, a young black man accused of the rape of a young white woman.

The year is 1935, and the small town is struggling to survive the Great Depression. Before we get to the heart of the trial, however, we meet Scout, her brother Jem, their new friend Dill, and Calpurnia, the tireless black woman who works for the Finch family and takes care of the children when their father is working. The times are tough and money is short, no doubt adding to the tension in the racially charged trial. The decision is a nearly foregone conclusion, but Atticus gives the case his all.

The Rep's production of To Kill A Mockingbird captures all the tension and social commentary of the story and adds down-to-earth authenticity that enhances the overall impact. Lenne Klingaman narrates with a wistful, loving tone as the adult Jean Louise Finch. Jonathan Gillard Daly is genuine as Atticus. Calm but resolute, with a slight drawl and a habit of extending his words just long enough to ensure everyone is paying attention.

Kaylee Ryan sparkles as the vivacious and curious Scout, filling the stage with a confidant, buoyant presence and infectious energy. She's aptly countered by Ronan Ryan as her protective brother Jem, Charlie Mathis as the impishly mischievous Dill, and Tanesha Gary as the thoughtful, observant, and loving Calpurnia. The young actors carry the bulk of the visual storytelling as well as much of the dialogue, particularly in the first act. Their performances are emotionally connected, filled with genuine expression and reaction, and properly nuanced, enabling them to deliver their lines with just the right tone.

The strong supporting cast contributes much of the texture and turmoil of the show. Amy Loui, Jerry Vogel, and Christopher Harris are memorable for their kindness and lack of guile. Alan Knoll and Rachel Fenton are convincing as Bob and Mayella Ewell. Their prejudice and distrust is nurtured by ignorance and poverty, and Fenton is sympathetically conflicted in her portrayal. Kimmie Kidd and Terrell Donnell Sledge may break your heart with their painfully nuanced and restrained interpretations of Helen and Tom Robinson. The two bring gravitas and clarity to the clearly innocent man and his appropriately distraught young wife. The ensemble and community add considerably to the production, evoking a visceral response to the story and artfully guiding the show's transitions with stirring gospel songs.

Director Risa Brainin keeps the focus on the storytelling and the emphasis on authentic, relatable characters. Scenic designer Narelle Sissons complements the approach, wisely constructing a minimal set that emphasizes the memory play's characters and lessons. Having the actors move and group flowers on the stage is another smart choice, suggesting the passing of time and season as well as shifting the emotional tone from scene to scene. Devon Painter's costumes are period appropriate, neither hiding nor exaggerating the social customs and tough times of the period. Composer and music director Michael Keck and lighting designer Michael Klaers provide the finishing touches to a show that moves with energy and purpose.

As an audience, we experience the town's deep-seeded attitudes and outspoken prejudice through the eyes of Scout and her companions, helping to soften the deeply troubling story and its emotional impact. The community provides comfort and hope through its resilience and quiet acknowledgement of even the smallest steps forward. The message of the show, and the history of prejudice that has often resulted in miscarriage of justice, cannot be understated -- these themes are still urgent and deserving of our attention. The production doesn't grandstand or beat a drum loudly to make its point, however, and the result is powerful and memorable.

Moving and effective, To Kill A Mockingbird, running through March 5, 2017 at The Repertory Theatre of St. Louis, is still, and unfortunately, all too relevant a story nearly 85 years after the period in which it is set. Strong, grounded performances, with well-articulated sub-context and moving transitions directed by Brainin, create an artful and compelling production.