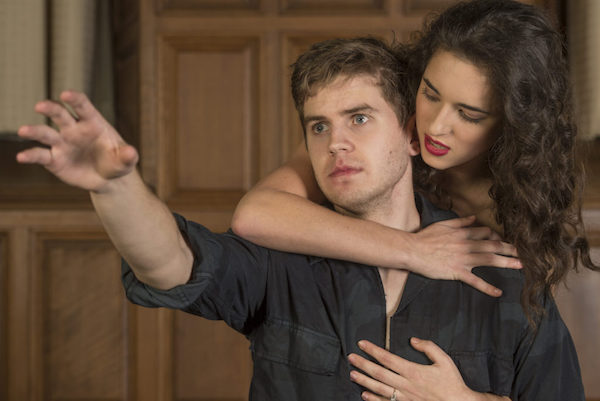 The Dangers of Prophecy: A Riveting 'Macbeth' at Washington University's Edison Theatre

One of the things that has always struck me about Macbeth, both the play and the title character, is the relationship to prophecy. Early in the play, of course, Macbeth and his companion Banquo meet the three "Weyward Sisters," aka, the Three Witches, who foretell three events: First, Macbeth, now the Thane of Glamis, will become the Thane of Cawdor; second, Macbeth will become King; and third, Banquo will be the progenitor of a line of kings.

Macbeth and Banquo scoff at this until they are informed by another thane, Ross, that Macdonwald, who had been Thane of Cawdor, has been found to be a traitor and that Macbeth is the new Thane of Cawdor. As Macbeth and Banquo take in this news, Macbeth wonders if the other prophecies might likewise be fulfilled without any action on his part. However, when his wife, Lady Macbeth, hears of all this, she insists that Macbeth cannot leave this to chance and that he must assassinate King Duncan as he sleeps. Though wracked by guilt beforehand -- seeing an apparition of a bloody dagger before his eyes -- he kills his king anyway. As he accepts and finally embraces that "What's done cannot be undone," he then tries to subvert the third prophecy by arranging to have both his friend Banquo and Banquo's son, Fleance, killed.

For me, this progressive twisting of reality to match and affirm his deepest fears and desires has made Macbeth one of the most tragically human of all Shakespeare's characters. Who among us has not gone searching, among our friends and family as well as on social media, for points of view that affirm our worldview, especially in the past year, most desperately perhaps in the past month? Macbeth's journey from ambitious but loyal soldier and civil servant who accepts whatever fate may bring, to tormented assassin who takes fate into his own hands, to disdainful tyrant who angrily defies fate may be seen as a moral descent to the vast majority of us, but as John Barth once wrote, "Everyone is necessarily the hero of his own life story." This is especially true of Macbeth. This is why I so admire actors. To truly go there and find all of Macbeth within oneself can only make a person more empathetic toward anyone whose view of the world may seem vastly unlike one's own.

The current production of Macbeth from the Washington University Performing Arts Department does a remarkable job of bringing the horror, the disgust, the wonder, the tragedy, and even the humor of Shakespeare's play to its audience. Though performed in the spacious Edison Theatre, the entire audience sits onstage in bleacher-style risers on three sides of the bare, arena-style playing space. Scene changes are suggested through evocative projections, vivid lighting, and fog, lots of fog. Henry Palkes creates a haunting score, and Teresa Doggett's costumes are unobtrusive modern dress yet distinctive enough to match the characters, including mysterious white gossamer shrouds for the Three Sisters.

Director Henry I. Schvey and dramaturg Daniel Washelesky make smart cuts (Donalbain, Duncan's second son, is gone and not missed) and insightful changes (Banquo here is a woman, and therefore, mother of kings) to keep the action moving, in a fleet, intermissionless, immersive 100 minutes. Most importantly, Schvey has worked with his young actors to bring out performances that are uniformly thoughtful and moving. (My only quibble: When some actors are facing away from you on this centrally placed stage, they can be difficult to hear. This will likely improve as they get used to being in this space, but for audience members, I would advise trying to snag a seat in the middle section.)

Josh Parrack is a powerful Macbeth who is nevertheless extremely affecting as he tentatively walks onstage after killing Duncan, his white shirt stained with blood. His guilt intensifying as he wails, "Sleep no more! Macbeth does murder sleep," Parrack shows both the moral center he has betrayed and the weakness that will prevent him from resisting his further descent. Caroline Sullivan is remarkably poised yet vulnerable as Lady Macbeth. Calculating and decisive in the early going, in the banquet scene (here done as a very upscale cocktail party) where Macbeth is terrified by the ghost of Banquo, Sullivan shows more genuine concern and horror at Macbeth's mental state than annoyance and embarrassment, seamlessly setting the stage for her acceptance of her moral culpability in her husband's actions and her own eventual fate.

As Macduff, Scott Greenberg's reaction when he hears the news of the slaughter of his wife and children at the direction of Macbeth is simply heart-rending as he quietly goes through all the stages of grief before our eyes. Michael Maley, as the callow but calculating Malcolm, seizes on the moment to implore Macduff to action against Macbeth, saying, "Dispute it like a man!" Macduff replies, "I shall do so, but I must also feel it as a man." Here, in this one moment, so much of my own struggle in the current political climate was crystallized, as these two actors balanced the feeling of profound loss with the need for action.

So what does Macbeth have to offer us in America in 2017? Schvey and Washelesky write in their Director's Notes, "You will not find Donald Trump or Hillary Clinton in the character of Macbeth, nor of Duncan, nor even of Malcolm; direct allegory would be a disservice to this masterpiece of ambiguity. However, you may sense something in the fog and filthy air that feels uncannily contemporary." For me it was impossible not to see the banquet/cocktail party where a leader rants about things which may or may not be there as taking place at, say, the Trump International Hotel in Washington, D.C., but that was my own interpretation and I am grateful that the creators of this production, rather than being polemical, allowed me to find my own way into it. Because that is art.

Macbeth runs Fridays and Saturdays at 8:00 p.m. and Sundays at 2:00 p.m. though March 5 at the Edison Theatre.