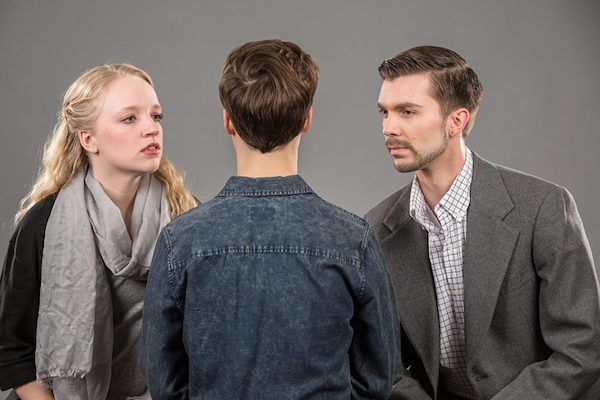 Webster Conservatory's 'Cockfight Play' has fierce battle, but no feathers

Productions at the Webster Conservatory are pretty much always fine, and the one that just opened is about as unfailingly fine as any I've seen there in a long time. This is one of the Conservatory's "Capstone" productions, which means it's chosen and directed by a student -- a "thesis production," if you will. Director James Kolditz has chosen a very fine script by British playwright Mike Bartlett and has put together all its aspects quite deftly and artistically.

But what the heck is the play's title? I read advertisements for "The Cockfight Play," and I was expecting blood and feathers. But no, when the lights went up here we were in the middle of rather conventional squabble between two rather conventional gay lovers in a high-toned flat in London. Is this bait-and-switch? C'mon! Gay plays are so common and cockfight plays so rare; I was disappointed.

But very quickly I was drawn into this story and I realized that it is far more than a conventional "gay play." It is in fact a quite courageous probing into the subject of "sexual identity" and the political tension that now surrounds it.

The actual title of the play is simply Cock, and it won the Olivier "Best New Play" award in London. But when it first played in New York certain timid newspapers (viz. The New York Times) felt that such bluntness might offend its genteel readers, so the Times reviewer invented that euphemistic title.

Handsome young John has been in a relationship with an affluent youngish broker for several years. Ironically John is the only character with a real name even though, as we soon learn, he is actually lacking (or perhaps merely refusing) any identity. His broker/lover is listed merely as "M" -- which I think just stands for "Man." It's a troubled relationship. M, dapper, with an expensive hair-cut and a chicly trimmed beard, is arch and sarcastic. He seems hungry for conflict. He constantly criticizes John for every little thing. It's a low-grade-abusive relationship, and John feels belittled. He feels that he is only M's "trophy."

There is a brief break-up during which John has an affair. With a woman! The woman (listed as "W") is a beautiful divorced class-room assistant. And she's nice. And she falls in love with him. And he with her! Even though he's only ever been attracted to men. They indulge in dreams of white picket fences and babies and family Christmases and grandchildren and all that. It is indeed true love -- at least so far as anyone could ever tell.

So, has she "cured" him? Is he "straight" now? Ah, no, he goes back to his broker -- but without breaking off with the woman. It's not just for all the gourmet food the broker cooks; it's not because John realizes he's "really gay." Nor will he embrace the label "bi-sexual." With all the tranquility and equanimity of Melville's "Bartleby the Scrivner" (who unbudgingly and without explanation eternally reiterates "I would prefer not to") John simply refuses to choose one lover or the other.

The broker even draws his father, "F" (Father?), into the fray. He's an iconic blustering but earnest and good hearted British father, and he's learned all the modern politically correct attitudes. He knows that gays are just born that way. He loves his gay son, he love's his son's partner. He urges John not to break up with his son. But he does it in such a "guy" sort of way: he tries to use logic to solve this emotional problem. He argues!

Now I myself abhor labels. I refused to choose Coke or Pepsi. I'm uncomfortable declaring myself a Democrat or Republican. Religion? Nowadays even to mark "None" puts you into some political encampment.

And so I empathize with John. God so filled the world with sexual attractions that I really can't blame John (as everyone around him does) for refusing to abjure half of that world of delights. For refusing to reject half of that world of love. At one point John says: "Why are you telling me that what I sleep with is more important than who I sleep with? Why are you telling me I have to know what I am?"

It's a brave foray into identity politics -- in its broadest sense -- and I'm sure the playwright is getting lots of indignant flack in his e-mail.
The cast is uniformly superb. Jay Stalder as John, Austin Glen Jacobs as the broker, Sigrid Wise as the woman, and Zak Moran as the father all show deep understanding and commitment. They all employ the very most authentic and uniform British accent. They do terrific work.

The simple set, by Jason James, consists of merely six beautiful rectangular shadow-box pillars of different heights. (These are inspired by works of Louise Nevelson). Mr. Kolditz's direction matches that simplicity. Scenes are, as in a cockfight, started with a bell. Between scenes an actor will toss off a sweater, or put on a jacket ore some-such -- requiring a mere few seconds. So everything goes very smoothly and swiftly. It's all exquisitely simple. Once John asks M to undress; without even a mimed hint of disrobing M simply steps onto a low pillar and lets John look at him. Perfect! The scene when John and the woman first have sex is quite excitingly graphic and intimate and real -- but they are separated by a whole stage of space and they are fully clothed. The sex is all in their minds and words. How beautiful!
Lighting by Caleb Taylor and costumes by Erin Reed are effective and appropriate.

It's a very, very good show! Cock (or "The Cockfight Play" or whatever) played at the Webster Conservatory April 8 through 10.