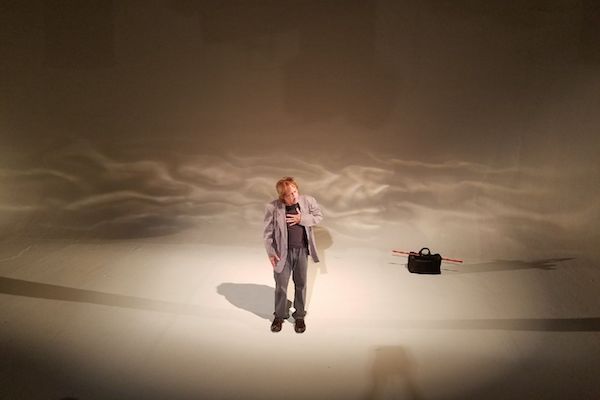 'Title and Deed' meanders pleasantly among topics great and small, impermanence, and love

The Midnight Company has gained a reputation for finding and bringing to life the stories of interestingly offbeat characters in odd and unfamiliar situations. Such is the case with Title and Deed, a story about a man seemingly trapped at an airport. The short show, presented without intermission, is curiously lulling and siren-like in its pull.

Will Eno's "monologue for a slightly foreign man" is a warm, wandering journey that gently reminds the audience we are all just passing through this earthly plane. That life is best when you love and allow your self to be loved. That you should fell free to wander aimlessly, but don't stay away too long. Trepidation, determination, and fascination share space in the chatty man's rambling talk. Sometimes actor Joe Hanrahan falters as he searches for a world, other times he becomes so passionate he loses control of the subject matter. Or so it would seem. No matter the detour, he consistently finds his way back to the moment.

Under the direction of frequent collaborative partner Sarah Whitney, Hanrahan lures us in by creating a curious and complex character with a compelling, if not always clearly purposed, story. With intricate and detailed threads weaving in and out of focus, Eno and Hanrahan seem in perfect consort. They practically hypnotize the audience with language, accent, timing, and pauses. Those pauses of Hanrahan are well timed and deftly played. Whether searching for a word, a memory, or to have a short chat with an audience member, they are gloriously rich in sub-context and innuendo.

Hanrahan ambles on to the stage carrying a small bag and looking around with a somewhat confused expression. He greets the audience as if he half expected us to be waiting for him, but is nonetheless surprised. In a rambling one-hour monologue we learn quite a bit about the man, his mother and father, his loves, and the mistakes he's made in life.  Occasionally stumbling over his word choice and our customs, it's clear the man isn't from "here;" without saying so directly, he even suggests he's not from this planet or plane. What's not clear is whether the man has been sent here on a mission or if he's just passing through on a visit.

The sparse set, designed by Bess Moynihan, takes advantage of the "seamless wall" at Avatar Studios to blur the horizon, an effect that reinforces the sense of being nowhere specific, but somewhere in between. As the monologue continues, the minimal lighting design slowly begins to further blend the floor and wall. Is it possible that we're all in limbo? Is Hanrahan the angel of death? Or have I just been sitting around the airport waiting for my flight for so long that the world, punctuated by Hanrahan's gentle, rhythmic voice, is hazy. You may feel a part of the time and place without precisely knowing when or where.

Hanrahan's personification ensures we're thoroughly interested in the man's story even if we never quite understand why, and there's a sort of comfortable confusion to his demeanor that instantly engenders sympathy. He describes customs of his homeland -- like reverse weddings and terrible Saturdays -- that pointedly fail to align with our day-to-day realities, all the while espousing that there is no finer state than loving and being loved, an idea that leaves most of the audience nodding in agreement. His most important point however maybe his caution that we "don't get too lost, for too long."

Title and Deed, running through June 24, perfectly pairs playwright Eno's fabulous wordplay with Hanrahan's gift for interpretation and personification. The Midnight Company once again delivers thoughtful, intimate theater that entertains and provokes. Though we may never fully realize the character's primary purpose, his story is delivered with simple eloquence that strikes me as vaguely important and definitely worth further thought.