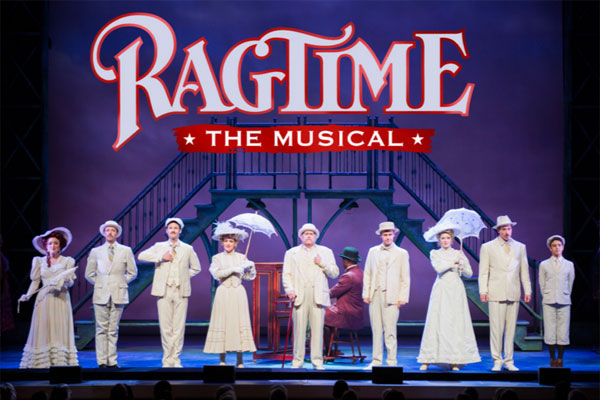 Adapted for the stage by Terrence McNally (Book), Stephen Flaherty (Music), and Lynn Ahrens (Lyrics), the potent mix of fictional characters and real historical people, and powerful songs, can make for a stirring experience, although in this particular production, the result was a little less stirring than it might have been.

In general, Ragtime - The Musical was well done. Director Marcia Milgrom Dodge kept things moving, pace-wise and choreography-wise. The costumes were colorful and the lighting suited the various moods well. However, minor issues kept the production from hitting it out of the ballpark (apt because one of the numbers involves Baseball!). The set is minimalist, with simple projections on the background cyc curtain to establish place, but the two-piece set of stairs, moved into various configurations, became tiresome to see after a while. The sound board operator was late on a number of microphone cues, causing lost dialog and lyrics. One character's physical gyrations at times made an already difficult-to-understand accent even more difficult to understand. And it's a good thing I knew all the lyrics going in because the words of several musical numbers, whether because of the sound system, or the actors' failure to enunciate, were difficult to discern. That's a shame because it's a great score.

Minor points, perhaps, but even minor points do add up. Nonetheless, I felt fortunate to have seen Ragtime live once again.